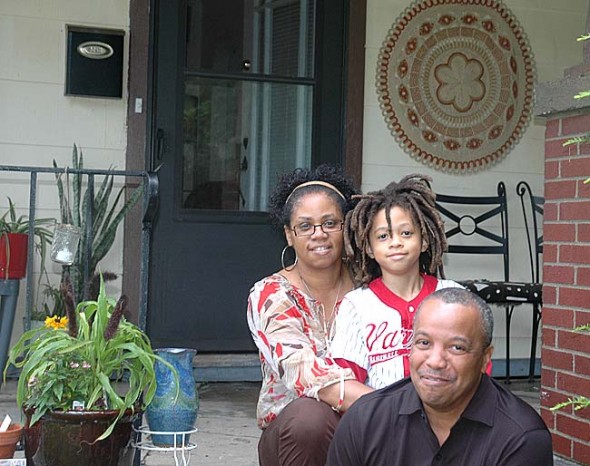 Toylyn and Basim Blunt recently moved to town from Dayton after Basim was hired by WYSO Public Radio to work on the Reinvention Stories project. Their son, Malcolm, will start third grade at Mills Lawn this fall. (Photo by Anisa Kline)

NEW FACES
An occasional series about newcomers to the village

The first thing Toylyn, Basim and Malcolm Blunt did when they moved into their house on North Stafford Street was light incense and candles as a way to prepare the space and bring positive energy to their new home. Imagine their surprise when, a few weeks later, the former tenants stopped by to say hello and shared that the very last thing they had done before they moved out was also light incense and candles, sending out energy to attract the right family to the house.

Blunt, who was recently hired to work for the WYSO Public Radio Reinvention Stories Project, moved here from Dayton with his wife and 8-year-old son in June and the family has been enjoying the town ever since.

“Two days after we moved in, the neighbors down the street invited us to a birthday party,” said Toylyn, and at the birthday party her son Malcolm was invited to a baseball game that evening. By the end of the day, he had been placed on a team and was playing.

“I was sending photos to my family on my phone, like ‘can you believe this?’” said Toylyn. “Our first week in Yellow Springs and [Malcolm’s] already on a baseball team!”

Although the family had visited Yellow Springs as tourists over the years, they began to really get to know the community when Basim became a Community Voices radio producer in 2012. The program, which is offered by WYSO, trains members of the community in radio story production and over the course of the classes participants develop and produce their own story.

“When we did Community Voices, we got more of a flavor of the community,” says Toylyn, a stay-at-home mom who would explore the town with Malcolm while Basim was in class. “People really embraced us and a lot said, ‘You really belong here.’”

By the summer of 2012 — before Basim had been offered the position with Reinvention Stories — the family began to seriously consider the move and looked at the school system to see if it would be a good fit for their son. Nonetheless, it took them a whole year to find a rental that met their needs. In the meantime, the job with Reinvention Stories opened up and the family finally moved in June.

Blunt, a former teacher who also has a background in radio, is uniquely suited for the work he is doing with the project. Partnering with WYSO, he will be helping to train the WYSO staff in how to produce video stories along with their radio pieces. His connections and involvement in Dayton are also an asset, since the Reinvention Stories Project is hoping to produce more stories about people in the city reinventing themselves.

“I just fell in love with [WYSO],” says Basim of his experience doing Community Voices. “It’s so different from commercial radio. They couldn’t get rid of me after Community Voices. We helped them move, we did the pledge drive,” and, as a board member of Film Dayton, he helped the station organize a “screenless screening” of Community Voices stories during the city’s film festival.

“Everyone knows I love film and radio,” Basim says. “The position with Reinvention Stories brings my two passions together.” His work also gives him the opportunity to work with local filmmakers Julia Reichert and Steve Bognar on a regular basis, a perk about which he is particularly happy.

“Steve and Julia are mentors for anyone in film and media in the area.” Basim says “This is a chance to work with them on a daily basis. It can’t get any better than this.”

Outside of work, the entire family is getting involved in different activities and experiences the town has to offer. Basim has volunteered to help coach baseball, Malcolm recently attended Eco-Camp and Toylyn has been checking out the tai chi classes offered at the Senior Center.

The family has also been enjoying the live music at the Emporium, the library, biking around the town, and all the different activities at Youngs, while also adjusting to the more natural elements that can accompany living in a small town.

“It’s so dark and quiet here at night,” says Toylyn, sharing that the first few nights the family found the silence and darkness a little uncomfortable. “Also, I forgot that there are mosquitos and spiders. We’re out in the country here.”

Malcolm, however, has been enjoying the fireflies and building birds’ nests out of sticks and leaves he finds in his yard — something he didn’t have in the family’s condo in Dayton. Although he doesn’t have a dog yet, living in a house with a yard makes getting one a much more likely possibility.

“I’m looking forward to getting a dog and going for fall walks in the Glen,” says Toylyn. Given his enthusiasm for film, Basim is excited about the reopening of the Little Art. For his part, Malcolm is looking forward to participating in the annual zombie “Thriller” walk and starting third grade at Mills Lawn in the fall.

When asked if anything about Yellow Springs had surprised the family since moving, Basim answered “The deer,” which have come into their yard and are frequently seen across the street.

“I’m surprised by how genuinely nice people are,” says Toylyn. “People introduced themselves to me at garage sales. This community authentically embraces new people.”