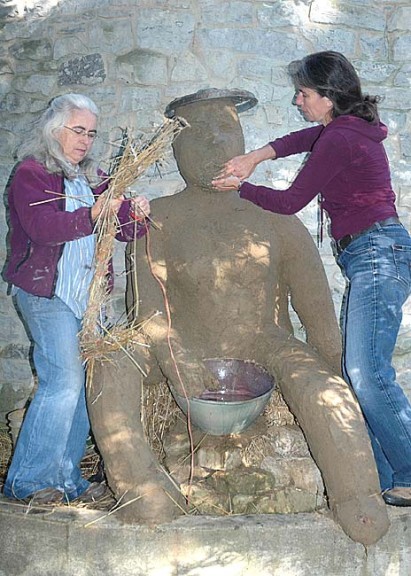 Beth Holyoke and Käthi Seidl add the finishing touch to their clay woman that sits outside the Glen Helen Building where their artwork is on display. The ‘Clay!’ exhibit continues through November 3. (Photo by Diane Chiddister)

Whenever Beth Holyoke begins planning a new exhibit for her artwork, she considers how the work will interact with the larger exhibit space. And when planning for “Clay!” an exhibit of sculptures created from earth plaster currently on exhibit in the Glen Helen Building, she and co-exhibitor Käthi Seidl were excited.

“I’m always inspired by the space, and this space is even more dramatic and wonderful,” she said. “Look at these wall — they are awesome.”

“Clay!,” which features large sculptures created by Seidl and Holyoke, opened earlier this month. The exhibit continues through November 3.

For “Clay!” the two women created a series of 8 foot tall sculptures from the earth plaster, then leaned the sculptures against the walls of the building’s round outer room. The plaster, created from clay, straw and sand, interacts with the textures and lines of the natural rock walls, which were designed by Read Viemeister in the building constructed by Jack Kline.

It’s a building in which two-dimensional artwork sometimes seems static, Holyoke said, but the large clay-based sculptures allow the energy and distinctiveness of the stones to stand out. On the west side of the room, the first sculptures the two artists created, inspired by the views from outside the windows, feature images of leaves, vines and butterflies. The women then created a series inspired by the human form, which lean against the east side of the room. All of the sculptures were created from earthen plaster dried onto plywood.

“Clay!” is the culmination of a dream shared by Holyoke and Seidl since they began working with earth plaster while building straw bale houses. Since 1999 they have worked on five straw bale homes, beginning with Holyoke’s in-laws, Tom and Evadene, and including a house that Seidl shares with her husband, Bob Brecha, and their children. The original impetus for building the homes was creating more environmentally sustainable houses, and the straw bale model, in which straw bales are covered with a mixture of straw, clay and sand, provides efficient insulation and low heating bills.

Over the years the two women, who have also collaborated on ceramic benches and other projects around town, found that they enjoyed working with earth plaster as an artistic material. They began adding designs to the walls of their straw bale homes, since the material, before it dries, is soft and malleable.

“The more we worked with it, the more we thought of it as artistic,” Seidl said.

Their first artistic collaboration featuring earth plaster was the giant snake they created outside the Yellow Springs Arts Council gallery on Corry Street last year. The snake lasted through the summer and fall before falling apart in the winter, since the earth plaster, when it meets up with water, begins to disintegrate. But Holyoke and Seidl appreciate the transitory nature of the material.

“When you spend your whole life making artwork, it’s enticing to make something that won’t always stay,” Holyoke said. And Seidl agreed.

“I like that the art isn’t permanent,” she said. “I don’t want to clutter up the world.”

While it’s unusual to create art with earth plaster, the material has been used for centuries for home construction by Native Americans in the southwest. When creating either art or a home, the process begins with hauling a large pile of clay, then putting smaller amounts in buckets and adding water. A screen is placed over the top of the bucket and the clay is then poured through the screen, which removes sticks, stones and large clumps. While the plaster stays soft in the bucket, it has to be used fairly quickly before it hardens. The plaster is transferred to a wheel barrow, where it’s mixed with sand and straw. The amount of sand added changes the consistency; in the Glen Helen show, the women have also created a round structure in the middle of the room that holds smaller sculptures, experimenting with exteriors with varying degrees of roughness.

“The fun part is to play around on the surfaces,” Seidl said.

The artists are thrilled to have the Glen Helen building available to show off both their earth plaster artwork, and the building itself. They originally planned to hold a workshop to teach how to make a strawbale bench, although it was canceled due to low enrollment. But they plan to do the workshop in the future at the Antioch Farm. Information will be available at a later date.

Holyoke and Seidl hope more people come to the show before it ends in November, and take a look at the Glen Helen building with an artistic partnering. They’re pleased with the result of their experiment in creating art from earth plaster.

“It feels like we succeeded in giving this space a freshening,” Holyoke said.