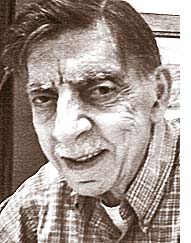 Constantine G. Pelekoudas, known as Connie, a long-time professor of economics and administrator at Antioch College, died on Oct. 4 at the Friends Care Center of complications resulting from Parkinson’s. He was 81.

Connie was born in 1932 into a large first generation Greek Chicago family. His father, George, painted buses for the Chicago Transit Authority, and his mother, Georgiana, was a homemaker. They had 16 children. Connie attended Lindblom High School, then the University of Illinois at Navy Pier. After serving in the U.S. Army for two years, he transferred to the University of Illinois at Urbana, majoring in math. He entered graduate school at Urbana where he took an M.A. in economics in 1962.

In 1957 he married Lois Morrell, who became his lifelong companion. While they were in graduate school, they became active in local Democratic politics, and Connie developed a skill for bringing people together to pursue a common goal. He was active in campaigning for John F. Kennedy, and for Senator Paul Douglas, whose commitment to the underprivileged and dislike of excessive bureaucracy and dishonesty in government matched his own.

In 1962 Connie joined the Antioch faculty and was a mainstay of a strong economics department that included Valdi Carlson, Ivan Lakos and later Mark Kasoff. His students remember his commitment to serious research and engaged political action. His academic specialty was in the key areas of finance and taxation. Ten years later, in l972, he announced his candidacy for the Democratic nomination to the Ohio House of Representatives, calling for an extensive revision of the tax code, provisions enacted to provide adequate services and ways to open up opportunities for employment, education and housing for all Ohio citizens. Although he failed to win the nomination, he continued his activity in politics and eventually was elected to the Mad River Green (Greenon) Board of Education, serving from 1982 to l989.

Connie held numerous “interim” appointments at Antioch where he was called in to solve an administrative problem or fill in for someone who was fired or had fled the scene. His low point in that role was when he was asked, as the college slid into bankruptcy, to notify creditors that they were to be paid 15 cents on the dollar. He personally delivered the news to vendors. It was a thankless task, but a necessary one and he did it efficiently, with diplomatic charm. His high point came when he was interim dean of the faculty for a year. He performed miracles because the faculty trusted him, knew that he had both their interests and the long-term interests of the institution at heart. He helped bring stability to an unstable college.

Connie, a lifelong baseball fan (St. Louis Cardinals), often alluded to baseball stories to highlight points he wanted to make to the Antioch community. Writing to the faculty in his role as faculty chair, he cited a remark made by Casey Stengel after viewing the New York Mets in spring training in 1962: “Doesn’t anybody here know how to play the game?” He was referring to the faculty and administrators of 1988 at Antioch who had adopted what he called a “discomforting attitude.” He wrote: “It is an attitude these days that says rules do not apply; that past agreements, practices and traditions do not hold; that every issue is to be determined on an ad hoc basis; and that whatever worked ‘before’ is simply not applicable because it was used before.” He said that baseball scouts said that what they looked for in a player who might become a star was five “tools”: the ability to hit, to hit with power, to catch, to throw and to have speed. These qualities one should look for in the selection of faculty members at a liberal arts college, or of administrators in a local school district. It can be said that he exhibited all those traits during his long tenure as faculty member, as a senior and respected administrative leader, as a dedicated and concerned community member and as the frequent and enthusiastic coach of little league baseball teams.

There were two organizations that he was particularly proud to support throughout his career and in retirement: The Antioch Review and the Yellow Springs Senior Center. He served on the board of the Review for 20 years and helped guide it through difficult periods when various administrators threatened its very existence. He was treasurer of the Yellow Springs Senior Center and led a successful campaign to establish an endowment. He saw the role of the Review as vital to the College’s engagement with ideas and creative work and the Center as a vital link to the town’s past and future.

In an interview he gave to a student writing a senior paper on the 1973 strike at Antioch, he deftly analyzed both the deadly strike and his early years at Antioch when John Sparks, George Geiger, J.D. Dawson, Oliver Loud, Louis Filler and Irwin Abrams were active. He said that there had been then a “sense of collaborative association, a sense of sharing responsibility among students and faculty and administration … that value has made it possible to be effective in those roles. Students have authority, faculty have authority, and we all have responsibility.” Connie Pelekoudas was a “five tool” player both on the field at Antioch College and off the field in the Hustead community.

Funeral services will be held at Bethel Lutheran Church at 11 a.m. on Thursday, Oct. 10. A gathering of friends and family will take place at the church from 5–7 p.m. on the preceding Wednesday. Burial will be in Glen Forest Cemetery. The family requests no flowers. Contributions in lieu of flowers may be sent to The Antioch Review, P.O. Box 148, Yellow Springs, OH 45387; Oesterlin Services for Youth, 1918 Mechanicsburg Road, Springfield, OH 45503; or to a charity of choice. Condolences may be expressed to the family at http://www.littletonandrue.com.