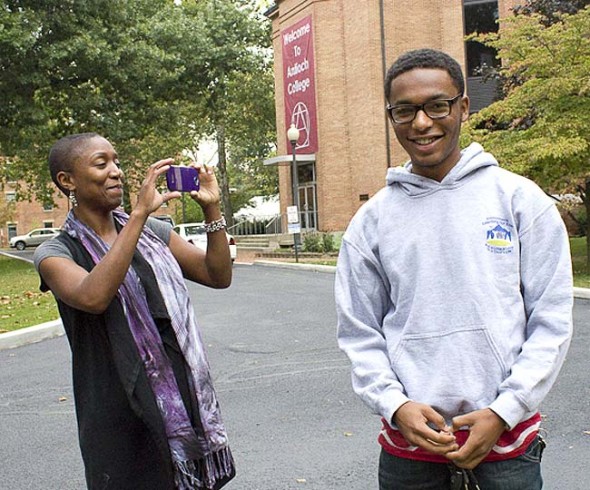 Michelle Davis captured a photo of her son, Ishan, on the Antioch College campus as the first-year student moved in last week. Allen is one of the 97 new students in the class of 2017. The college population doubled to around 200 with the arrival of its third class since reopening. (Submitted photo by Dennie Eagleson)

The free tuition scholarship, the small town of Yellow Springs and the opportunity to help rebuild a college continue to be a draw for Antioch, new students said this week. Move-in day for the class of 2017 was Oct. 1.

Incoming first-year student Steph Harman of Columbus wants to help Antioch “revolutionize education” while she gains real-world experience through co-ops. She said she particularly resonates with Roosevelt’s advice that “it’s better to do big things at a small school than small things at a big school.” Harman thinks she’ll fit in best at Antioch, a one-of-a-kind institution.

“Antioch is as unique to other schools as we are to Antioch,” Harman said.
Mitch Goth, of Janesville, Wis., added that one characteristic of Antioch students seems to be their open-mindedness and embracing of differences.

“The only way you won’t fit in at Antioch is if you’re normal,” he joked. “This college appreciates the student that is different.”

Goth, an amateur paranormal investigator, got hooked on the small town of Yellow Springs once he visited and also saw that Antioch could give him the chance to be something bigger than himself.

According to Antioch dean of admissions Micah Canal, the new crop of students is noteworthy for many reasons. They boast an average unweighted high school GPA of 3.65 and an average ACT score of 26. Ohio, Texas, and California are the top feeder states, with 28 states and two countries represented. Eighteen percent of the students who applied to Antioch this school year were accepted, and 65 percent of those enrolled.
Canal added that the new class is a “gritty bunch” of thinkers and doers with experience working outside the classroom in their communities. Their future at Antioch looks bright.

“These students will, as Antiochians have for generations before, engage deeply in the rigorous undergraduate curriculum … have their knowledge and agency tested through four co-op placements over their four years of study, graduating with a healthy résumé, a fascinating story of adventure, and an ability to apply their classroom learning in a real-world context,” Canal wrote in an email.

Jane Foreman, of Houston, Texas found Antioch far more humble as a campus community than other schools she visited. Foreman plans to design an art history major while pursuing a love of puppetry. Octavio Escamilla, of Tampa Bay, Fla., wants to start running clubs and other athletic groups at Antioch while at other times traveling the country and world on co-op. Katie Olson, a visual arts major with plans of being a pastry chef, was enticed by the chance to be a part of Antioch’s rebirth.

Cherokee Hill-Read, of Waco, Texas, plans to study forensic pathology and wants to get experience in hospitals on co-op. She learned about Antioch from an article on Huffington Post. Meanwhile, Rian Laurence of Utah has long been aware of Antioch; her mom graduated from the college in 1992. But she wasn’t sure it was for her until going through the admission process, which was far different from other schools where she applied.

“I liked how they looked at me as a person, what I was doing and how I felt about issues,” Laurence said.

With plans to major in environmental science, Laurence was also attracted by the college’s sustainable food practices and commitment to renewable energy. Laurence, for one, is pleased with the college’s potential new vegetable mascot, which the dining hall serves in a variety of ways, from kale chips to kale smoothies.