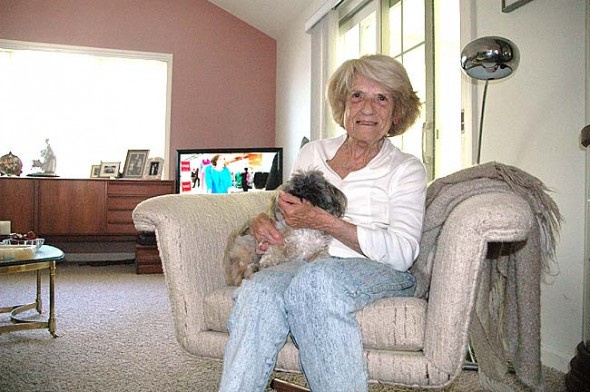 Two years ago Anne Chalfant moved in as a renter in one of Friends Care Community’s independent living homes. Now that Friends is selling her unit, she, unlike two other renters, has decided to buy her home. (Photo by Lauren Heaton)

When Friends Care Community built the first independent living homes on the Herman Street campus about 10 years ago, the hope was that the units would give seniors an option for maintenance-free living near the services needed to age in place. The buy-in model employed to finance the first 18 units was typical among retirement communities. Though it would not be a money maker for the organization, the units would be sold at a moderate price, and they would be financially self-sustaining.

The housing model has worked out largely as conceived. Except three years ago when three of the homes were coincidentally vacated around the same time and, due to the dip in the housing market, no one stepped up to buy them. Veering away from usual practice, in 2010 Friends leased the homes temporarily.

“The units were sitting empty, and we decided it was better to have some cash flow than none,” Friends Executive Director Karl Zalar said last week. “So we decided to rent them.”

Because Friends had not decided the long-term future of the units and needed flexibility, the leases began as a one-year agreement transitioning to month-to-month with 30-days notice on either end. The units rented quickly to seniors looking for affordable, maintenance-free housing in the village. Then at the end of 2012 the market showed signs of recovery, and the management staff met with each of the three renters to give them the option to buy or allow the unit to be shown to prospective buyers.

The situation was both unsettling and surprising to resident Sho Maruyama, who at 86, had hoped to continue renting his unit indefinitely, according to his son Benji Maruyama. The family had already scoured the village for an affordable, maintenance-free, handicap-accessible home and were unable to find one. Though they liked the independent units at Friends, the buy-in financial model was not affordable for them because they weren’t able to attain a traditional loan, Maruyama said.

To purchase an independent unit at Friends Care, according to Zalar, a buyer must pay the full cost of the unit up front. The two- and three-bedroom units, which average about 1,400 square feet, are priced between $184,000 and $210,000 and require an additional monthly fee of $550 for both indoor and outdoor maintenance needs. Each year the unit depreciates by 5 percent, however, if and when the residents decide to leave, they get back whatever remains of the initial cash layout within one year of vacating. Buyers have the right to stay as long as they want, but because they don’t legally own the land or the building, obtaining a mortgage is very difficult, Zalar said. The model was conceived to allow senior residents to sell their homes and use the cash to buy-in at Friends, he said.

But, like Maruyama, local seniors Lynda and Brad Terry didn’t have the cash on hand to buy-in at Friends. They liked the Friends campus and had been thrilled to rent there after an unsuccessful search in town for an affordable home designed for an aging couple. The offer when they moved in 2011 had been a 12-month lease with a monthly rent of $1,600, including maintenance. Because of the transition to 30 days, the couple had asked Friends about the future status of the units. According to Lynda Terry, “the staff’s response implied that there were no plans to convert back to the buy-in option anytime soon.”

Maruyama also said that the staff was not clear about what would happen once the leases transitioned to 30-days. His family had the impression that while Friends wasn’t necessarily going to rent his unit forever, the elder Maruyama would be able to stay there as long as he needed to.

Though Friends showed the rented units in January 2013, no offers were made, and the board decided to take the spring to study and consider the right future for the rental units. In mid-August, Friends announced that the rental units would indeed be sold, and that the current residents would have the option to buy-in with credit for the money they had already paid in. If they didn’t want to buy, they would have an extended nine months to move.

One of the three renters, Anne Chalfant, decided to buy-in, she said last week. When she moved to Yellow Springs from Baltimore to be near her son, Craig Mesure, and family, she wasn’t sure she wanted to stay, so renting worked well. But she has enjoyed her three years here, and she feels comfortable and financially stable enough to buy.

The Terrys had secured an option on a home in early summer but didn’t commit until they heard about the final decision, by accident, from a friend at a monthly luncheon in early August. Maruyama is still living at Friends and looking for a new home in the village.

Friends needs the cash
The recent decision to sell the rental units was the result of a three-month financial study of the total services Friends offers. The study concluded that Friends did not have the financial flexibility to operate without selling them at full price, Zalar said last week.

When the three rental units were first vacated by their original inhabitants in 2010, the transition occurred unexpectedly and within a small window. Friends was not prepared to pay out the cash that remained on all three accounts at once, and the subsequent inability to resell the units has reduced their cash flow ever since, Zalar said.
“We paid out x amount of money to build those units that we haven’t gotten back because we haven’t sold them again,” he explained.

Friends had originally planned to build a total of 32 independent living units (two attached units in each of 16 buildings). In 2002 the infrastructure for 20 units was installed, and the campus currently has 18 units, and plans to build and sell two more units to pay for the entire infrastructure.

The finance model for the independent living units was established at a time when Friends was receiving larger Medicaid reimbursements and more people were applying to live in the assisted living units. Now, though the new rehabilitation wing has helped somewhat, the institution as a whole is less flush financially and less able to sustain sudden cash needs, such as the one to pay out the residents who left in 2010.
And the independent units were never priced to make money for Friends, Zalar said. Each unit is sold at cost, and the maintenance fees just cover the cost of upkeep. Each time the units are resold at the original cost, they have to be completely re-outfitted to like new again. The model wasn’t supposed to make money, but it was supposed to be self-sustaining.

Unintended consequences
While Mesure says that Friends was clear with him about the terms of the lease for his mom’s unit, both the Terrys and Maruyama said that Friends was insensitive in communicating its long-term plans for the rental units. The prolonged lack of direction added undue stress for the residents, they said.

“Friends had every legal right to ask us to move so they could sell the unit; that’s not the issue,” Terry said. “It’s that the Board handled it with so little sensitivity to the fact that moving is very hard when you are older, as is living for months with the uncertainty as to whether you had a place to live or not.”

Terry suggested better ways Friends could have handled the situation, including being clear from the beginning about its decision and then giving the renters more time to find other housing, she said. Or Friends could have sold the units as they became available by attrition, she said.

And she wonders if Friends is staying true to its mission, as she feels the current financial model only works for the economically advantaged.

“You have to be upper-middle class, at least, to afford the buy-in,” Terry said. “As a nonprofit that was initiated by members of the local Friends Meeting, FCC is a great service for the community, and independent living is as big a need, as are the assisted living and nursing home components. But only the wealthier people in town can afford the independent units. Where is a model that provides housing for seniors with more modest income and limited resources?”

Regarding the lease, Zalar said, the terms were clear from the beginning. And the renters actually received more than a year’s extension on their leases.

“We’re trying to be as fair as we possibly can within the limits of our business needs,” Zalar said. “These are strategic business decisions, and yes we are a not-for-profit organization, but we’re not a charity. Our long-term viability is critical to ensure we can continue to care for those who are here now.”

And Friends acknowledges that the independent units serve a particular demographic of the community. It has done well for those who wanted to sell their homes and buy a unit on the campus. Friends never intended to serve all the housing needs of the village, both Zalar and Friends board vice-president Sandy McHugh said last week. Nor does it intend to manage rental units in the future.

“Friends Care Community isn’t the answer to the senior housing problem — that’s not our place in the community,” Zalar said. “And renting is a whole lot different than what we’re doing as well, dealing with evictions, places that are torn up… the board decided we weren’t interested in that.”

Moving forward
Because the finance model for the independent living units has proved to be a potential stressor for the organization, according to Board President Todd Leventhal, Friends has decided that small changes are necessary to prevent Friends from losing money on the units.

“Friends Care Community is exploring minor changes for future owners to the current model of the independent living units,” Leventhal said. “We’ll be talking with current residents about it over the next couple of months.”

As for the future of the remaining land on the campus, the Friends Care board is fairly certain that no more units will be built.

Though Ohio has a larger than average senior population and Yellow Springs has even more seniors than the state average, contrary to expectations, the level of demand for housing at Friends is not as high as anticipated a decade ago. Seniors today are more active, living longer and staying in their homes longer than they used to, Leventhal said. Whatever future decisions Friends makes will be to promote its long-term survival within the context of these current trends, Friends leaders said.