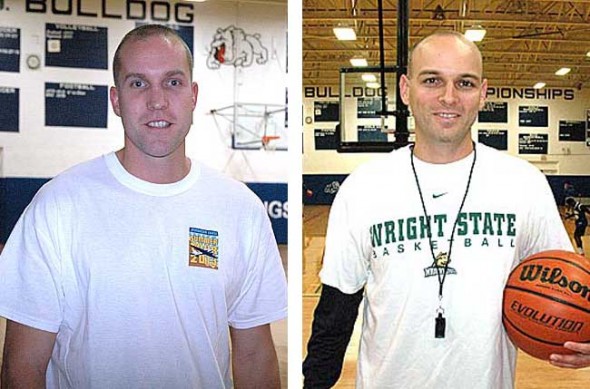 McKinney School math and science teacher Jack Hatert, left, leads the varsity girls basketball team this year, while teacher Steve Grasso, of Kettering, takes over the boys basketball team. Hatert, who has coached in the program for six years, hopes to keep the ball rolling from last year’s successful season, during which the girls won sectionals for the first time since 1987. Grasso is new to the program, but previously coached under YSHS basketball alumnus Hank Bias. (Photos by Megan Bachman)

Hatert, a 31-year-old McKinney School math and science teacher, takes the helm of a girls team that won sectionals last year for the first time since 1987 but graduated some top talent. Hatert has coached in the program for six years, including as an assistant last year under veteran coach Tim Barga, who stepped down after last season due to the long commute. Hatert, who lives in Springfield, brings continuity to the program and will run the same offenses and defense as last year.

“I’ve been around the program for years and coached these seniors when they were in seventh and eighth grade,” Hatert said. “I didn’t want them to come into a new system, so I did it for the health of the program. I’m going to pick up where [Barga] left off.”

Adding to the comfort level of his team is the addition of Assistant Coach Jeff Collins, a fellow McKinney math and science teacher, Hatert said.

Returning to the team are Brianna Ayers, Kennedy Harshaw, Anna Mullin, Molly Hendrickson and Rachele Orme. Seven new girls have come out this season, including freshman Elizabeth Smith, who dominated at the middle school level. A roster of 12 may seem small, but it’s the most the Lady Bulldogs have mustered at the beginning of a season in recent memory, Hatert said. According to Hatert, that’s in part because of the team’s success last year, which also included a share of the Metro Buckeye Conference title and an 18–8 record, and because the returning players reached out to their classmates to bring them into the fold and up to speed.
“They were pushing [new girls] a bit,” Hatert said. “Our seniors are great leaders. It’s almost like having coaches. They are really helping the younger players learn.”

Hatert learned a lot from Barga on how to win (Barga hit 500 career victories during last year’s season), and winning is still the goal this season. But Hatert also brings his own skills to the position. He says he can see a couple of steps ahead of other teams from his experience both as a coach and a player at Ansonia High School in Darke County. But the relationship with his team is paramount.

“There is a trust there,” Hatert said. “If I ask them to do something, they’ll work hard.”

Hatert admits that his goals for this year are ambitious — contending, once again for the league title and winning a few tournament games — but he wants to keep expectations high. He also wants Yellow Springs to become known for a certain style of play.

“What I want them to be known for is how hard we work and how hard we play,” Hatert said. “And I want us to demonstrate sportsmanship, for example, by always helping a player up off the ground.”

Boys coach to lean on tradition
YSHS boys basketball coach Steve Grasso steps into the shoes of Coach Brad Newsome, who retired last year after 13 seasons as the winningest coach in YSHS boys basketball history. The new team is mostly underclassmen (there is just one senior and four juniors on the squad). Grasso, 30, is a reading intervention specialist at a Cincinnati area high school.

Though Grasso teaches in Cincinnati and lives in Kettering, he has a strong connection to YSHS basketball. Hank Bias, a member of the YSHS 1992 district championship team, was Grasso’s basketball coach when he played at Fairmont High School in Kettering, and later his mentor as Grasso coached in that program under him for the last six years. Grasso hopes to bring elements of Coach Bias’ teaching style back to YSHS.

“One of the things I really enjoyed about [Bias] was he was a very intense guy but he cared a lot about his players and he was very personable,” Grasso said. “Once you build that rapport it goes a long way.”

Grasso also hopes to build on the long tradition of success in the YSHS boys basketball program. In Grasso’s mind that history goes back to Charlie Coles, the longtime coach at Miami University who set scoring records while a player at YSHS in the late 1950s and who coached the YSHS 1972 team to a district title.

Coincidentally, Grasso was hired the same day Coles died, last year, which he sees as a positive sign.
Grasso’s assistant, Bobby Crawford of Centerville, is also an exciting addition to the program, Grasso said, as Crawford has coached players who now play for Division I college squads.

But Grasso has his work cut out for him. The Bulldogs, who were 15–10 last season and made it to the sectional finals, graduated many key players. Returning to the team is senior Eric Lawhorn and juniors Isaiah Taylor, Liam Weigand, Devon Perry and Edward Johnson, while there are a lot of new faces, including some players from the soccer team and several exchange students, for a solid turnout of about 16.

“We’re a young and exciting group,” Grasso said. “It’s a fresh start, but we want to keep the tradition in mind. We want to be the next group to hang one of those [district championship] banners on the wall.”

Grasso’s goal for this year is to finish with a record over .500 and to “set the tone for what people expect when they play Yellow Springs in the future,” which he said is a team that “battles tough, plays smart and plays together.” Grasso wants to teach his players how to play the right way.

“I’m not as concerned about the score of the game as playing the right way,” Grasso said. “That means solid defense, playing as a team, sharing the basketball and diving on loose balls — doing those extra things that make a difference. If we do that the wins will come.”

Grasso also hopes to take a cue from Newsome’s long tenure at YSHS and focus on his relationship with players.
“Mentoring is one of the primary reasons I got into teaching and coaching,” Grasso said. “Life’s all about overcoming adversity and that’s what sports can teach you. It’s not what happens in life, it’s how you react to it.”