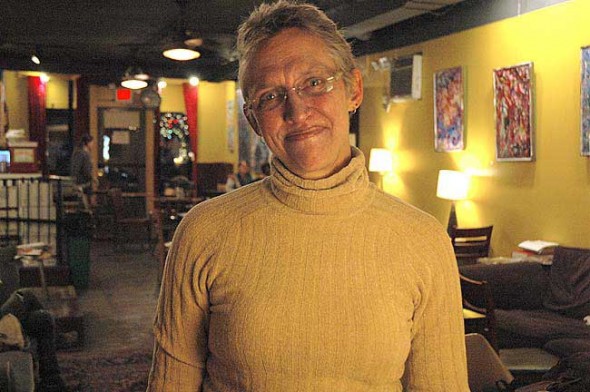 Judith Hempfling’s eight-year tenure on Village Council ended this month when her term expired. Hempfling, who was Council president since 2007, said her greatest accomplishments were securing renewable energy contracts, supporting Antioch College and promoting democracy in the village by leading a strong Council that responded to its citizens. (Photo by Megan Bachman)

Council leader looks back, ahead

A few months into her first term on Village Council, Judith Hempfling sat down at her computer and typed a resignation letter.

Elected in 2006, Hempfling saw herself as a lone progressive voice on a more conservative Council, and said she felt pressured to go along with the Council majority, while her attempts to get legislation on the agenda were constantly blocked.

“I felt very ineffective and isolated and it was really stressful,” Hempfling recalled this week.
Hempfling never sent her resignation letter. Instead, she found that by mobilizing citizens to pack Council Chambers and speak their mind, she could force an issue, or at least keep the majority from rolling on with their agenda.

“I realized that when you get enough people, even if I can’t make things happen, I can make things not happen — at least for the moment,” she said.

And in an incredible turn, by the end of her first year in office, Hempfling was elected Council President, a position she held until this month when her second term expired.

During her seven-year tenure, Hempfling led Council through some momentous, and also controversial decisions around Antioch College, energy consumption and affordable housing. But above all, Hempfling is most proud that she gave the public a voice in government.

“Citizens felt like they had no voice — they were disenchanted with the process,” Hempfling said of the sentiment when she was elected. “My greatest accomplishment is really the discussion of government that we’ve had…that it’s of and by and for the people.”

Hempfling, who is 61 and a full-time hospice nurse, said she did not run again because of Council’s demanding time commitment, while her time on Council has been well worth it.

Controversy calls
Early in Hempfling’s first term two controversial issues arose — a potential new housing development on what was known as the Fogg farm and the announcement from Antioch University that it would close Antioch College.
Hempfling spoke up against the housing development and in support of Antioch College while others on Council remained silent, she said. On one occasion, at a meeting on Antioch’s closure at the First Presbyterian Church, she called on the university to keep the college open. Fellow Council members had urged her not to speak, Hempfling said. Then, when the Antioch University president came to Council seeking support for the closure plan, Hempfling helped organize to bring 100 people to the Council meeting.

“It was by the seat of my pants and out of total desperation,” Hempfling said of her tactic. “[Antioch University] could have got the nod of the Council.”

Instead, citizens packed the chambers, lined the walls and spilled into the hallway in support of the college. Antioch College was closed in 2008 and though it was later purchased by a group of alumni and reopened, the college could’ve come out on stronger footing if it never closed, Hempfling said. Still, Hempfling had found a way to make her voice — and the voice of citizens heard during a tense time.

Speaking up
To encourage citizens to speak at Council meetings, Hempfling instituted a number of changes. So citizens would feel less intimidated, she made it so only Council members, the Village manager and the Village Clerk could sit at the table in the front of the room. Professionals addressing Council would now have to stand and face Council with the audience behind them. Hempfling’s view that local citizens, not a group of outside experts often knew best underscored the change, she said.

“I was trying to make it a little more citizen-friendly,” Hempfling said. “The more people in suits and ties — the professionals — the more distance it puts between Council and citizens, and they’re there to talk to us, not the experts.”

Hempfling also said she slowed down the decision-making process so citizens could feel more informed and had an opportunity to weigh in on Council decisions before they were made. Hempfling tried to make the budget process easier for the public to understand because “how you spend your money says it all about your priorities” even though many locals don’t pay much attention, she said.

And Hempfling cultivated a climate of respectful dialogue at Council meetings, both among Council members and between Council and citizens, she said, by not allowing personal attacks but encouraging vigorous debate vital for democracy to work.

“The discourse is a lot healthier than it was,” Hempfling said. “If you look at Council, there’s a collegiality. We don’t make personal attacks to each other and while might be mad at each other, it doesn’t get nasty.”

Making progress
Hempfling arrived on Council concerned about global warming and had the chance to make a difference early on, when then-Village Manager Eric Swansen urged Council to approve a plan to build an electric substation to accommodate rising energy demand in the village. Skeptical and believing the village should aim to decrease rather than increase its energy use, Hempfling helped organize and served on the Electrical System Task Force. That group found that the substation was not needed, helping the village avoid more than $3 million in unnecessary costs.

Later, Hempfling oversaw a major transformation in Village energy policy, as coal contracts were passed by in favor of renewable energy projects like wind, solar and hydroelectric. Today the Village’s electric portfolio is composed of 85 percent renewable energy and the Village avoided thousands of dollars in fines that could have come from signing on to coal plants.

Hempfling also was proud of the small amount of funding she got allocated to the Human Relations Commission. The $10,000 allotted was controversial at the time.

“One of our goals was being a welcoming community for diverse people but there was no money there,” Hempfling said of the funding of the volunteer group, which organizes neighborhood block parties, empowerment workshops at Yellow Springs High School, and an annual film festival on issues facing the black community, among other activities, she said.

In another controversial move, Hempfling successful pushed to raise Council members’ pay in two steps from $1,500 per year to $7,200 per year. That move allowed people of lower income to consider serving on Council, and paid Council members a more respectable salary in recognition of the work they put in, she said.

Increasing Council pay fit with Hempfling’s view of the relative importance of Council in a Council-Manager government, because paying Council members more would give them a chance to participate more. Towards that end, Hempfling (who did not personally benefit from the pay raise) also initiated a lot of legislation during her tenure rather than waiting for the manager to bring everything to the table, she said.

“The regional expectation is that most village managers just run their communities,” Hempfling said. “I didn’t feel that was the way it was supposed to be and I fought that idea. That’s a business model, not a democracy.”
More to be done

While encouraged by what she was able to accomplish, Hempfling also leaves Council wishing she could have done more. An energy portfolio rich in renewables is great, but the Village should be doing more to encourage residents to cut energy consumption as well, she said. And while a program to discount pool fees to low income residents was a good step, the needs of low income people in the village are still critical.

Hempfling is also disappointed that she couldn’t do more as a Council member to support affordable housing in the village, though she brought forth the initial legislation for a partnership with Home, Inc. to build four affordable homes on Village-owned land on Cemetery Street. That the plan to build affordable apartments for seniors on the Barr property fell through was a big disappointment, said Hempfling, who even traveled to Columbus to urge that the project be financed.

While Hempfling has said she is open to considering running for Council again in the future, at the moment she plans to spend more time with her one-and-a-half year old grandson, Rocket, and continue working full time, while getting involved in social justice causes.

Hempfling may be stepping away from Council, but she doesn’t intend to quit politics entirely, she said. She sees the struggles of low income people as the most pressing issue and may get more active in efforts to promote a living wage or address the growing income gap between the rich and poor, she said.
As Hempfling sees it, there’s still a lot of work to be done.

“There’s a big world out there,” she said.