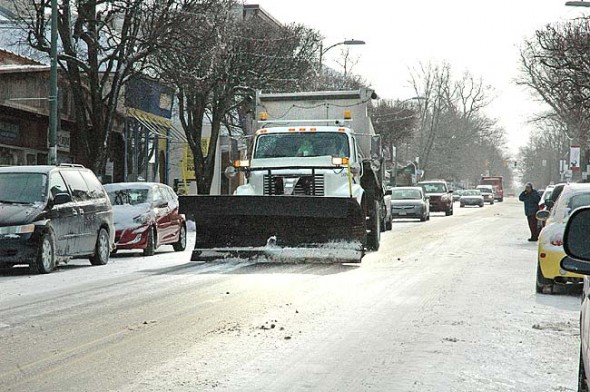 While snow wasn’t the worst enemy during the recent two-day chill, Village crews nevertheless plowed streets regularly. The cold was intense but mercifully short, and by Wednesday the weather was returning to just a normal cold. (Photo by Lauren Heaton)

A nip of the north in southern Ohio

The main clue that things weren’t right on Monday could be found downtown, where the usual weekday hubbub went missing. Streets and sidewalks were empty and coffee shops, very uncharacteristically, looked deserted.

The culprit, of course, was the cold. Specifically, an arctic blast of frigid air that pushed into Yellow Springs early Monday morning and stayed through Tuesday.

“This is some of the coldest air we’ve seen,” said meteorologist Myron Padgett of the Wilmington office of the National Oceanic Atmospheric Administration, or NOAA, on Monday morning. The cold intensified through the day, hitting -6 in late afternoon and dropping into the negative teens overnight, with windchill around 30 below. The expected high that day made Monday the coldest day in 20 years, Padgett said, back to January 1994.

Area media warned that people should stay home if possible, and Dayton’s Channel 7 website announced more than 300 school, business and activity closings, including Wright State University, Wright Patterson Air Force Base and, of course, Yellow Springs schools. Judging by business at the Emporium on Monday, many villagers heeded the warnings, with business down that morning by about $200 compared to normal, according to manager Steve Hunt.

But while some businesses took a hit, the village came through the cold relatively unscathed, according to a variety of first-responders. Chief Colin Altman of Miami Township Fire-Rescue reported on Tuesday that so far the rescue squad had received no calls of villagers suffering from falls or cold-related illness, only cold-related mechanical problems, such as furnace pilot lights that went out and a few minor car accidents. The squad treated one man for hypothermia early Tuesday morning, after the man, who was from Vandalia, had a car accident around midnight on Grinnell Road but fled the scene after the sheriff arrived, according to Altman. The man appeared to have been hiding in the snow in the area for several hours and his body temperature was dangerously low when found, Altman said.

“He was lucky we found him. He could have died,” he said.

Yellow Springs police dispatch reported late Monday that there had been no reports of villagers in distress. In weather so cold, Interim Village Manager Kent Bristol said he worries most about water main breaks or power outages, and thankfully, neither happened. Bristol was also relieved that there were few reported instances of fallen trees or limbs, which in the past have led to outages.

“My impression is that the Village has done a good job trimming trees,” Bristol said. “There are not as many limbs coming down.”

Local elders appeared to have weathered the cold well, according to Barbara Brookshire of the Senior Center’s Homemaker Program for Seniors. Brookshire said she checked in with her staff of 13 homemakers, who visit elders who live alone, and found that none were worried about their clients.

“There was no reason to feel that anyone was in distress,” she said.

And while business was down for many stores, those who needed prescriptions on Monday were undeterred by ice or frigid air, according to Janice Blandford of Town Drug, who said the pharmacy filled more than 100 prescriptions that day, including to people using walkers or canes.

“It seems to me there’s a lot of hearty people in this town,” she said.

The Village streets crew ­— Kent Harding, Tanner Bussey and Scott Gochenouer — have been busy this winter, according to Streets head Jason Hamby on Tuesday.

The group, with occasional help from the Village electric crew, has been called out three times in the middle of the night this year to clean streets, including early Monday morning, and eight times during daylight.

“We’re out whenever the roads get slick,” he said.

But the extreme cold makes their work harder, as “the lower the temperature, the less effective the salt,” according to Hamby. “Nothing really works.”

Hamby encourages villagers to limit their exposure to the cold and to “be patient” with the slow-working salt on the roads.

On Monday afternoon, a hardy group of young villagers looking for company converged on the Emporium, where Jack Whitaker said that even growing up in Maine, he hadn’t experienced his car doors freezing shut, as they had that day.

“I had to crawl through the back door,” he said, adding that he was drinking lots of hot tea, as recommended by the Jack Kerouac novel The Dharma Bums, to keep warm.

A group of Winds employees joked about “the culture of terror” that led to the fear-based media buildup to the cold weather, although Belle Pilar Fleming said she also appreciates that bad weather can promote community.

“I think inclement weather brings people together,” she said.

But while bad weather may bring people together, it apparently doesn’t do the same for bugs. According to Glen Courtright of EnviroFlight, the cold weather required that he move his black soldier flies, which he breeds to produce animal feed, to a more secure indoor location, where their breeding activities ceased.

“Soldier flies need full light,” he said. “If you bring them inside, they don’t mate.”

Perhaps the most activity on Monday took place at AC Service, the local plumbing and heating business.

Villagers with malfunctioning furnaces weren’t shy about calling AC, Phillips said, and the entire staff of 10, including seven repairmen, had been scrambling all day to keep up with demand.

“So far we’ve been able to keep up with it,” Phillips said, stating that employees would work as long as needed to meet customers’ needs. “We don’t want people to be cold.”

But those who were cold on Monday and Tuesday don’t have to wait long for relief: this weekend the temperature is predicted to climb into the high 40s.