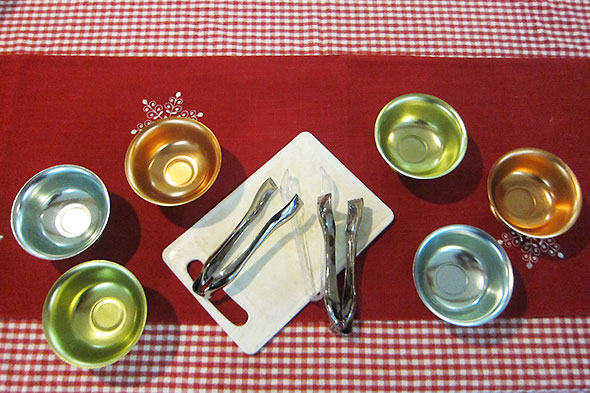 Today is my day to work at the Yellow Springs Winter Market. Hosting the market at the Yellow Springs United Methodist Church, 202 S Winter St, is the work of five families: the Reynolds, the Clarks, Pastor Gordon Smith and his wife Bev Tanamachi, Wally Rehm, and myself. Roger Reynolds is the ship’s captain, but he and his wife Macey are taking some well-deserved shore leave this week. Wally and I usually close so last night we set our alarms and promise to arrive by 8:15am.

I nearly leave early at 7:55am when my son tackles me at the door insisting on pancakes. The house is still waking up. My daughter is dressing for her second basketball game, and my husband is in the shower. I take pity on the boy, and we whip up the pancake batter together. I leave the batter next to the warming griddle for my husband, kiss my boy good morning, and venture out. 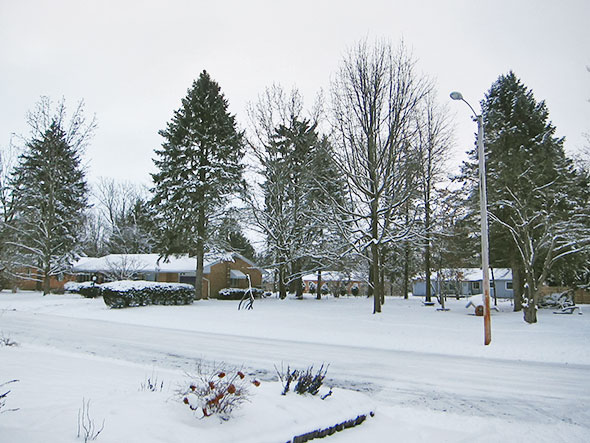 I drive the streets to the church and find conditions mixed. The roads are not as slick as we had encountered on Friday, but I find myself wondering if people will brave a trip.

At the church, I arrive at 8:15 to a shuffle of carts and produce. Wally opened the church up just before I arrived, and the vendors are making ready for the market’s 9am opening. Tables are piled high with boxes, baskets, and trays. Patchwork Gardens alone lines up two dozen boxes of produce—bright orange carrots, bulbous sweet potatoes, and richly-veined winter greens. They begin bagging produce for the customers who will soon be waiting at the door. Transferring glistening gems from metal trays to display plates like an attentive jeweler, Mariano Rios provisions out his apple tarts, flourless cake, macarones, and alfajores. Nicole Manieri is stocking the market’s “cold and flu remedy” section with neat, well labeled packages of medicinal teas, elderberry syrup, and other time-tested curatives.

Keeping clear of the bustle, I set up the market’s greeting table. Perched on top of the stairs leading into the church’s fellowship hall, I’ll be able to direct new customers to the hall and the venders below, keep a head count of arrivals, and answer questions that people have about the market.

The first question I get is “When does the market open?” Though we open at 9am, a long line forms at 8:45am. At first we have three and then five and then eleven shoppers in queue. I let them in out of the cold, and we stand at the top of the stairs and peer longingly downstairs. Wally appears the foot of the stairs and, seeing our plight, asks for patience as final preparations are made. 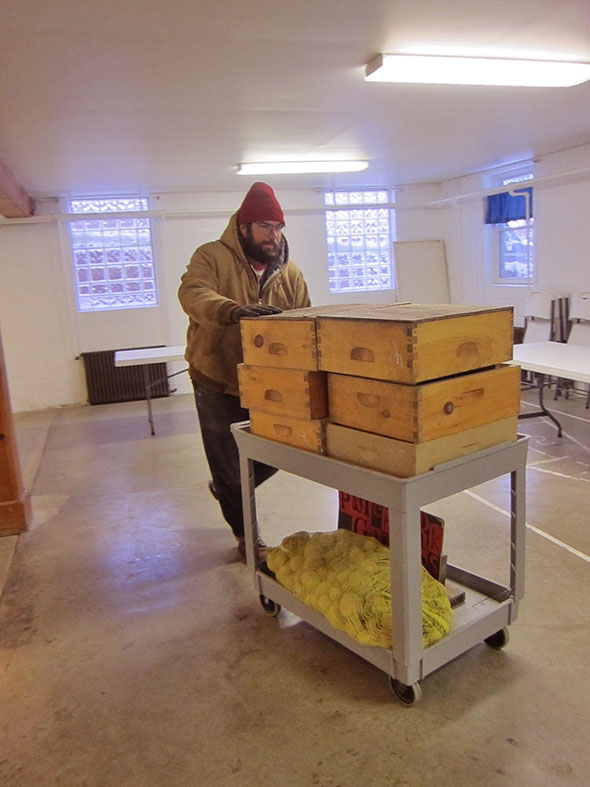 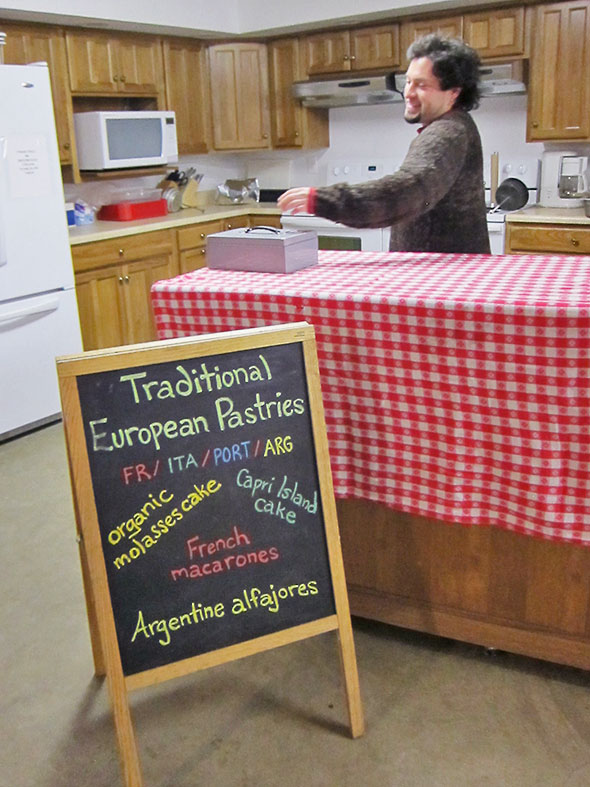 As we wait, Julia Reichert joins the line, and we all congratulate her on her exciting news. Just two days before, nominations for the 2014 Academy Awards were announced, and a film that she worked on as associate producer—Prison Terminal: The Last Days of Jack Hall directed by Edgar Barens—received a nomination for Best Documentary – Short Subject. When asked, she tells the crowd what an associated producer does—like giving advise on fundraising and assisting in the editing process—and laughs at the attention and well wishes she’s received since Thursday morning. 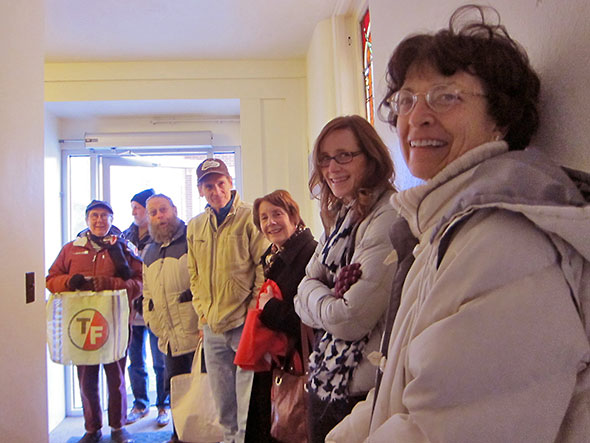 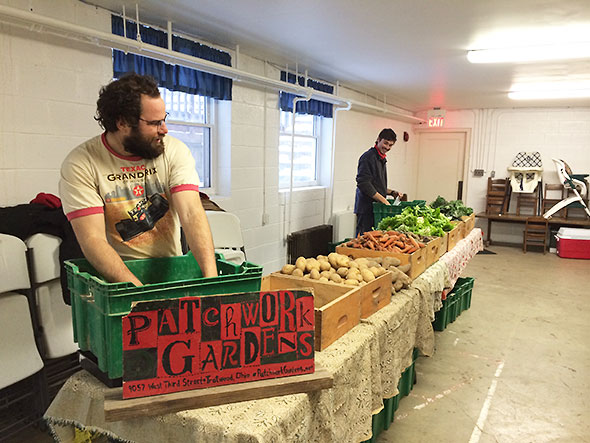 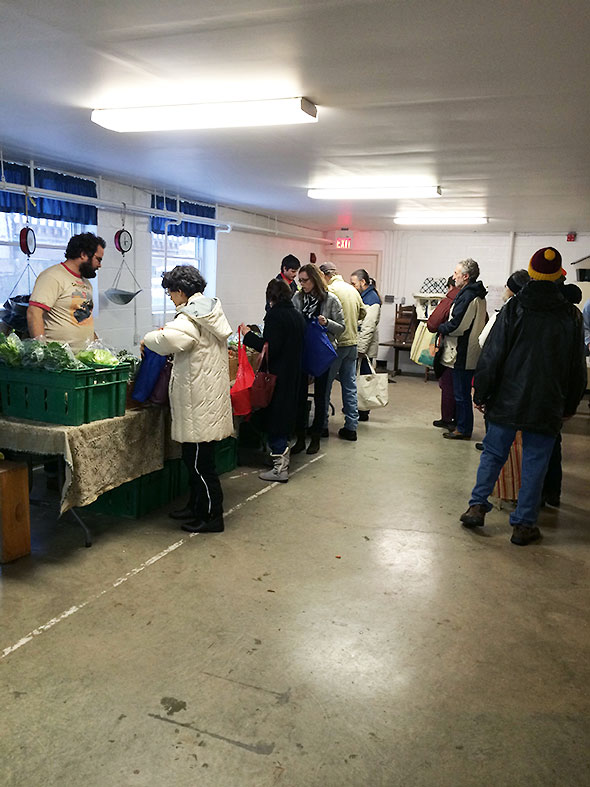 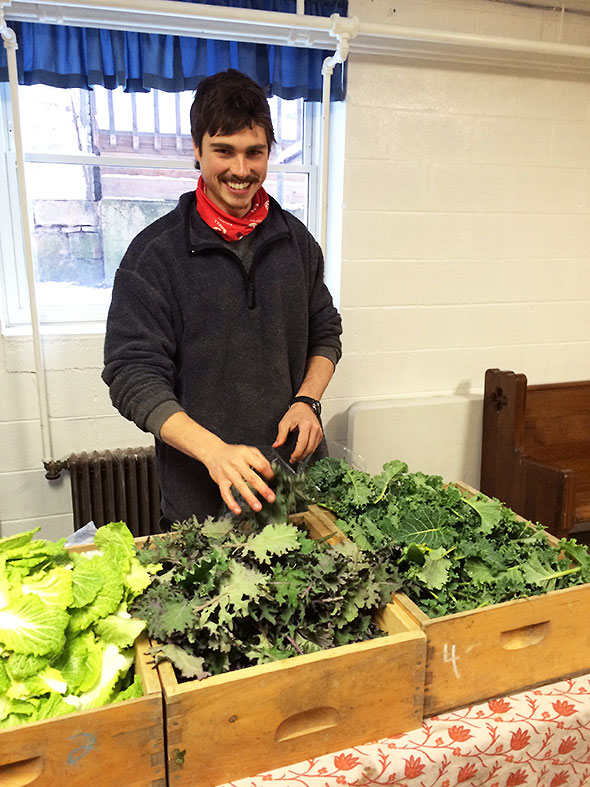 Having engrossed us, she continues her tale even as the market opens. She tells us how she got interested in the project, about the film’s humble beginning and the burgeoning interest of key industry players, and about the great success made by filmmaker Edgar Barens. The crowd takes her stories as well as the day’s offerings at market. Avid customers load up on kale, salad greens, and potatoes and sample the sweet and tasty breads offered by Neighborhood Nest Baked Goods, a new vendor to this year’s market. 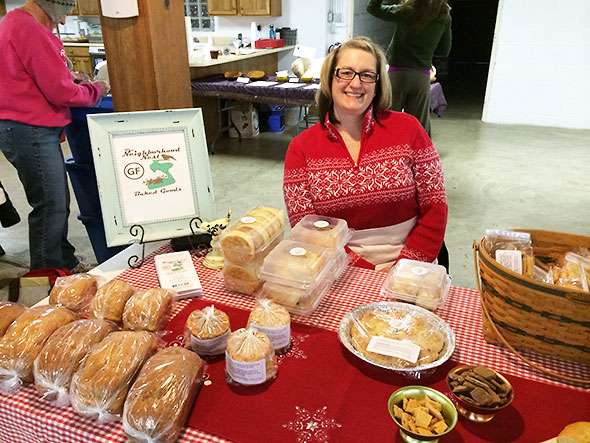 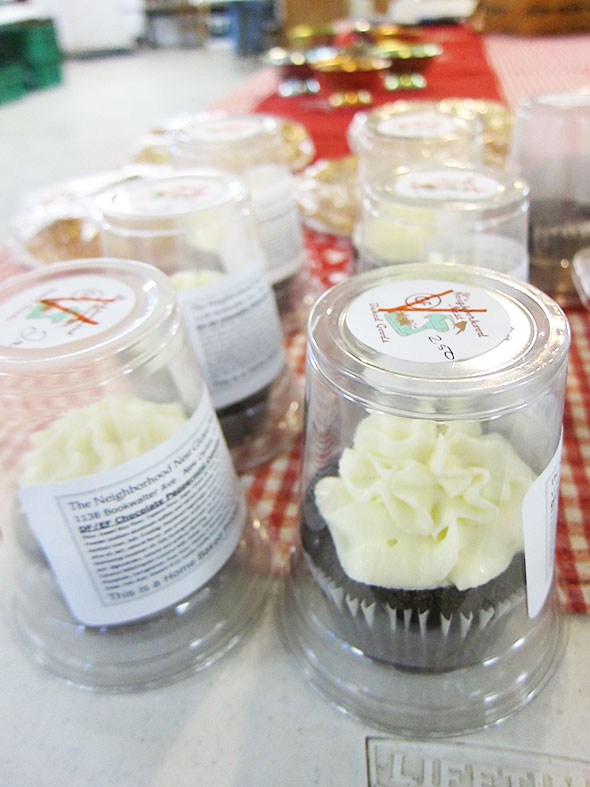 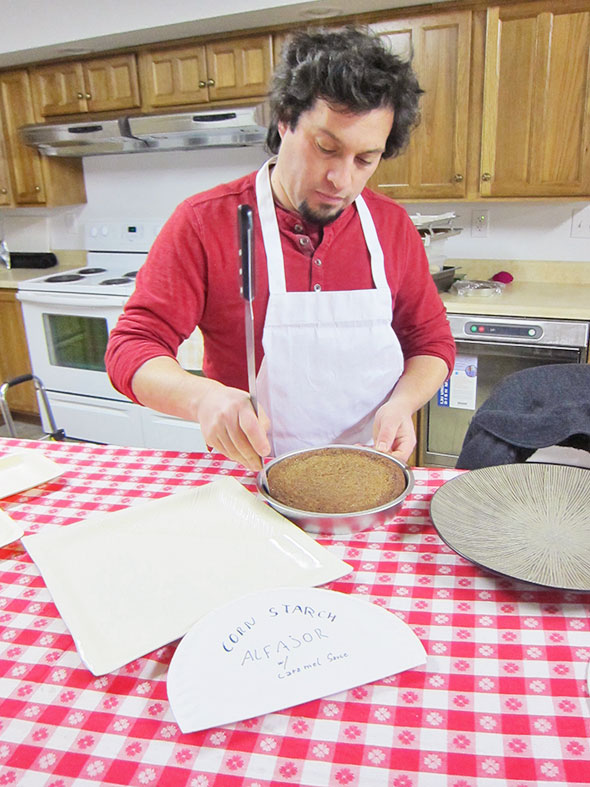 Tempting as the greens appear and endeared as I am to stories of cinema, I am looking for breakfast, so I veer away from the early crowd. I buy a satisfying apple tart from Mariano and a hot cup of herbal tea from Nicole and head back upstairs. At the top of the stairs, I relieve Wally from his station at the market table and sit to enjoy my treats. Mariano’s tart is stacked in crispy flaky layers, the apple on top baked to a creamy consistency. The fragrant steam of the tea soothes the tip of my snow-blasted nose restoring its natural rose color. My family arrives shortly afterwards, and I encourage them to seek out the cinnamon apple treats and caramel popcorn that Louise Berrier offers and that they love so well. A few minutes later, they arrive at back at the top of the stairs triumphantly holding their purchased goods. 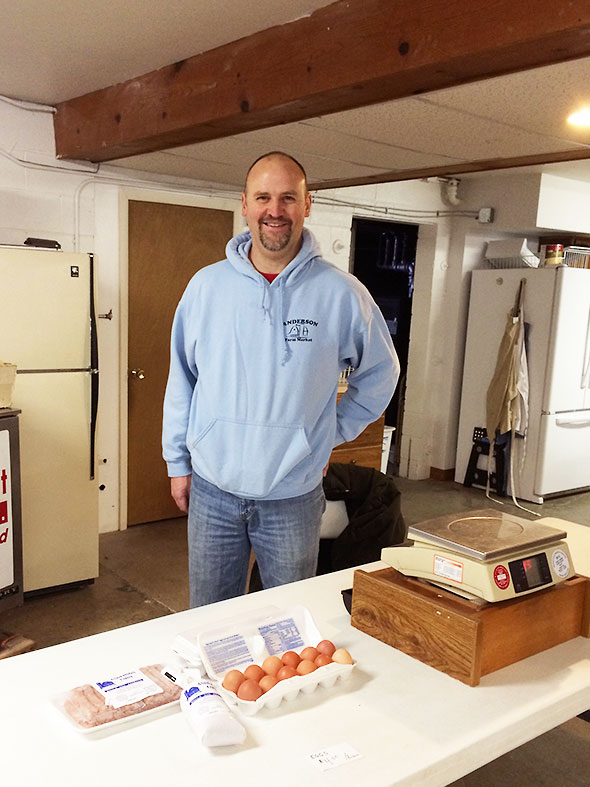 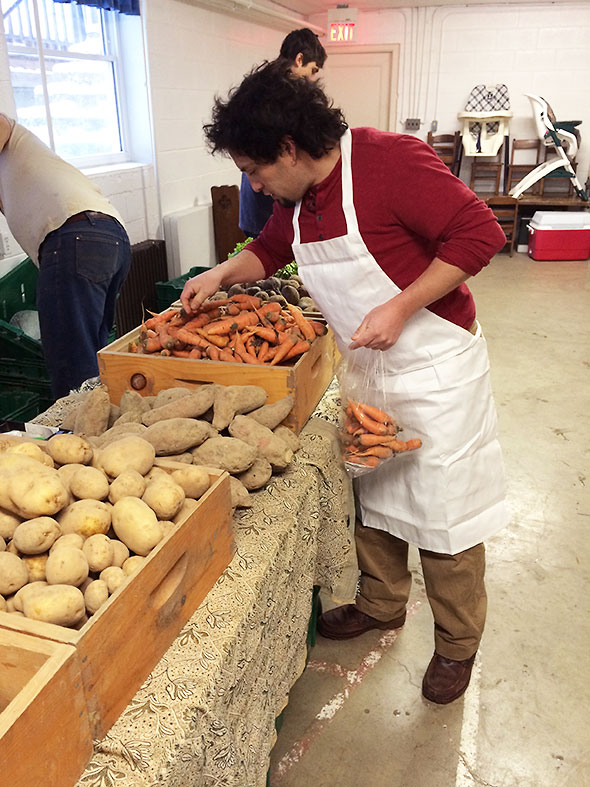 When relieved by Jason Clark, I return downstairs to find this week’s supply of kale gone. I order up the last head of lettuce, two sweet potatoes, and a couple pear-sized butternut squash. Mariano Rios joins me to stock up on carrots, and we discuss with Mark of Patchwork Gardens our plans for the produce. Next, I turn to the next table to talk to Doug Anderson about securing half of a pig. His booth has the savory makings of a hearty breakfast: eggs and sausage from Anderson Farms. Just this past week, he took a couple of hogs to the butcher, and we make plans for me to take possession of several ham steaks, pork chops and bacon slabs later in the week. 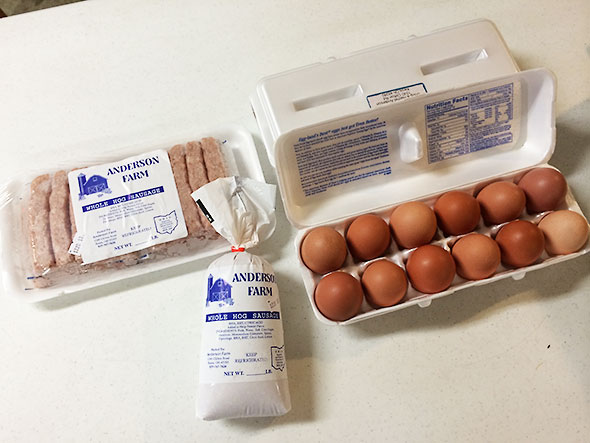 Before the market closes at 11:30am, I stock up on a few more items: onion soup from Louise Berrier and herb truffles from Nicole Maniere. 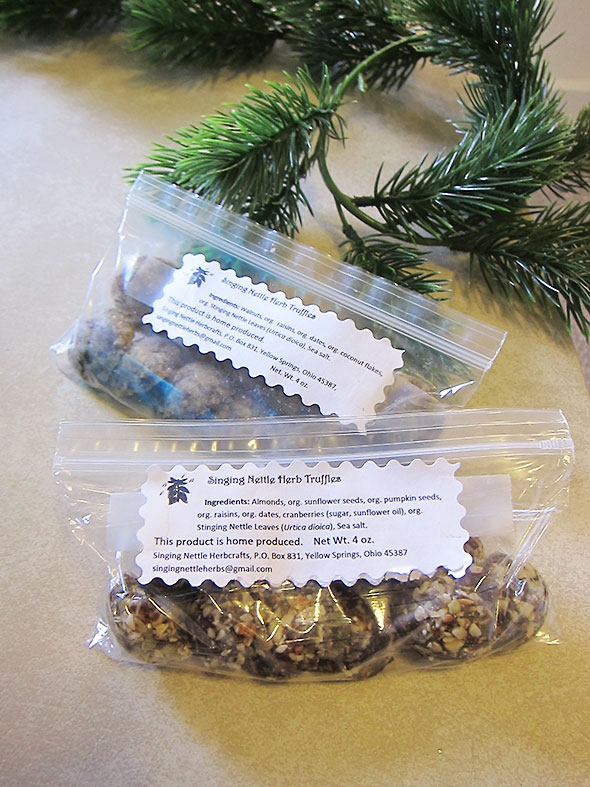 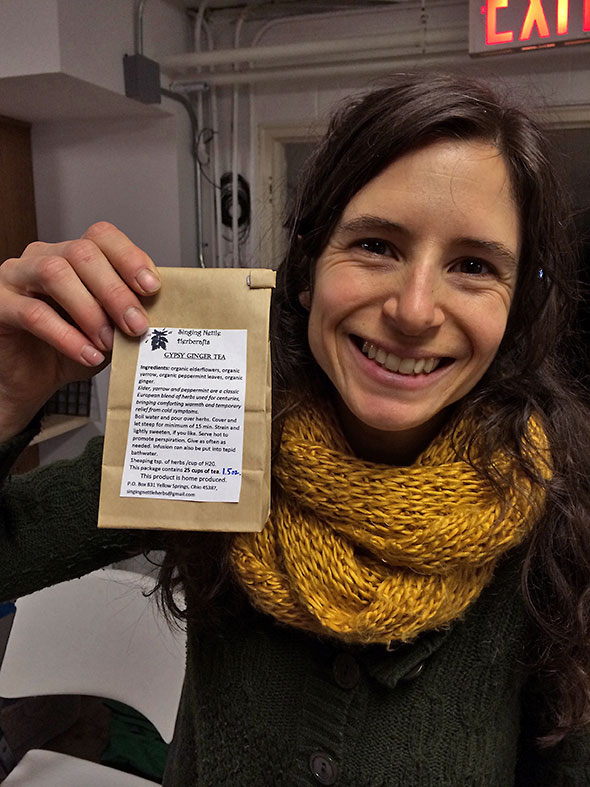 At the last, I decide to take home the tea offerings from Nicole. She recommends putting the cool down tea in a warm bath for the children in the case where they catch a fever. We hope for the best, but I feel better leaving for the week well provisioned. After we close for the day, a young couple shows up. Recognizing my friends, I hand the latecomers a head of lettuce and we make plans to meet next week…but this time at 9am.

One Response to “BLOG-Early At the Market”