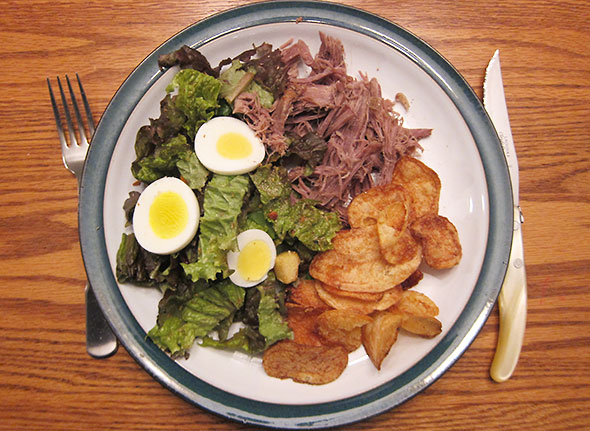 Ever since we got a slow cooker, I’ve been resolved to make pulled pork. From our pig raised at Smaller Footprint Farm, we’ve had a fine looking shoulder in the freezer waiting patiently for a while now. This week seemed an appropriate time to fulfill my resolution as we transitioned from one year to the next. I pulled several cookbooks from the bookshelf and noted the common ingredients. For the dry rub, cumin and cinnamon seemed constant companions, and I could almost taste their cordial harmony. The cooking portion of these recipes were intended for a wood fired grill, so I kept the books open and turned to the web. I hadn’t gotten far into typing “pulled pork crock pot” into Google search when a link popped up—Slow Cooker Apple Cider Pulled Pork—and I found myself on the road to Peifer’s Orchard. 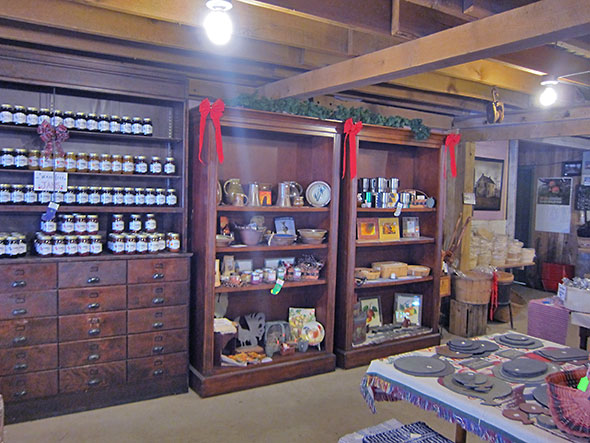 We love Peifer’s apple cider. The trouble is I can’t keep it in the house past a day; it is consumed that quickly. I arrive at Peifer’s to find the farm market configured for winter. Instead of heading in the heavy north-facing doors that open to the cider press, I enter by the west side door and Peifer’s collection of amish baskets. The room is half its normal size. They stand up a wall next to the cider case this time of year to make the space cozier and easier to warm. I grab a couple of two-quart jugs from the case and at the counter allow myself to be tempted by a bag of Sweet and Salty Potato Chips produced by Rue Farms of Springfield Ohio. Chips and pulled pork are a perfect match, and the sweet and salty chips seem especially prefect. 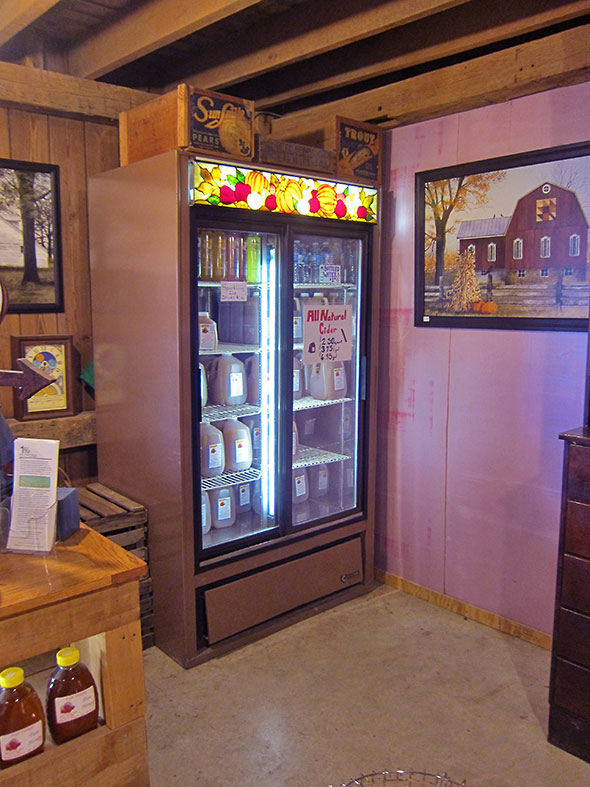 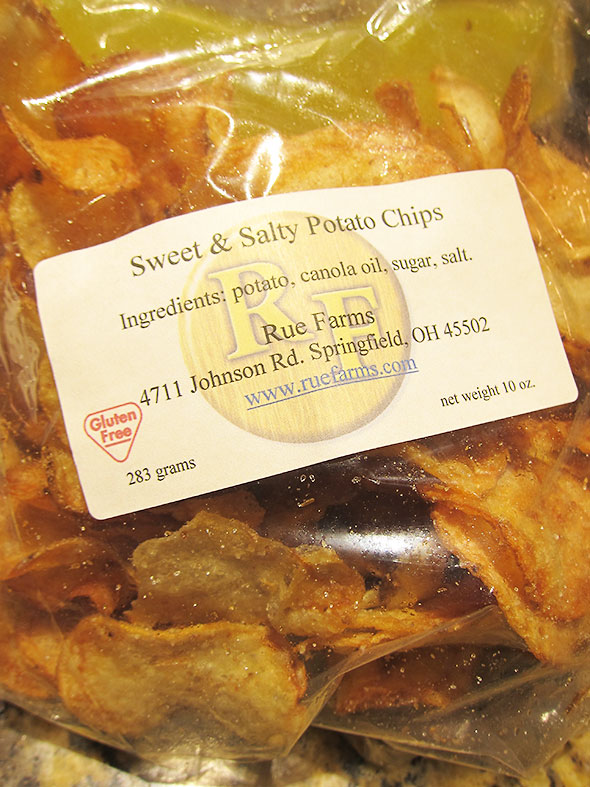 Next, I head to Starflower Natural Foods, 142 Dayton St, thinking that I might need a bottle of Bragg Apple Cider Vinegar. I pick up a quart. 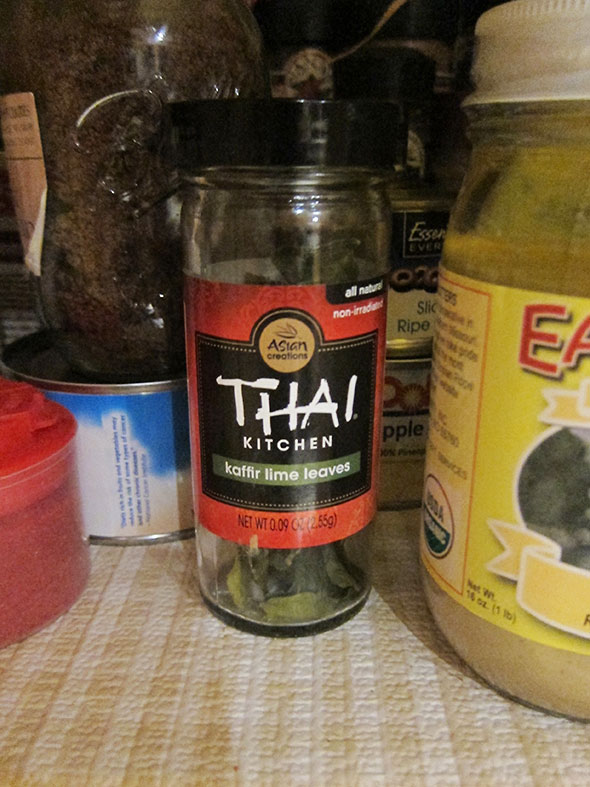 Opposite the vinegar, another bottle catches my eye—kaffir lime leaves—which immediately strike me as an appropriate substitute for the pulled pork recipe’s bay leaf. I leave Starflower with both bottles.

At home, I consider that I also have a potential substitute for the apple cider vinegar. Months ago, after reading Adam Roberts’ interview of Alice Waters in the book Secrets of the Best Chefs, I followed Ms Waters’ example and started making my own vinegar. The process that she described seemed as simple as it was practice: Put a small amount of vinegar in an empty bottle and pour into it the leftovers of any good wine opened but not quite finished off. Cover the bottle with a whisp of cheese cloth and store in a dark place. Over a few weeks, the wine aided by the mother vinegar will turn to a wine vinegar and one, potentially, finer than store-bought wine vinegar.

As simple a process as I could imagine, I opted to start two bottles: one for white wine and one for red. Both share the same mother—a little Bragg’s apple cider vinegar—and, at this time of transition from the Year 2013 to the Year 2014, both have had time to age and mature. 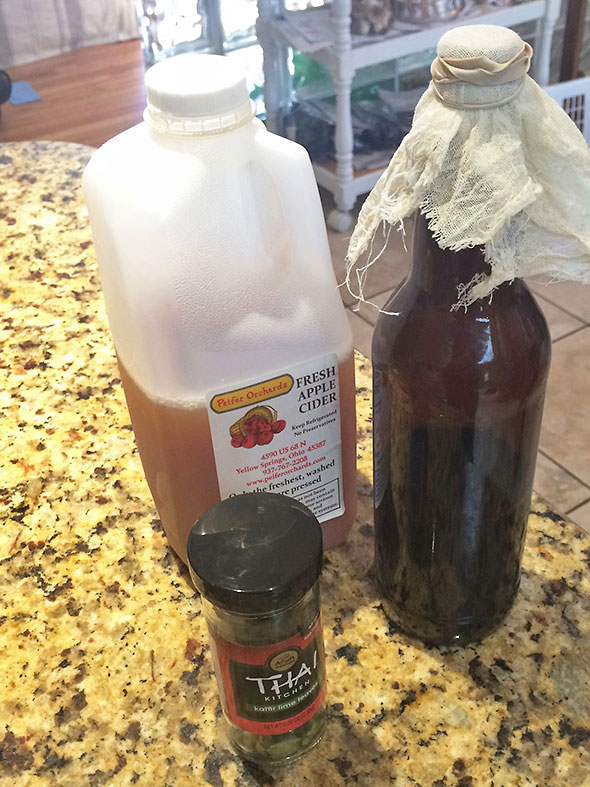 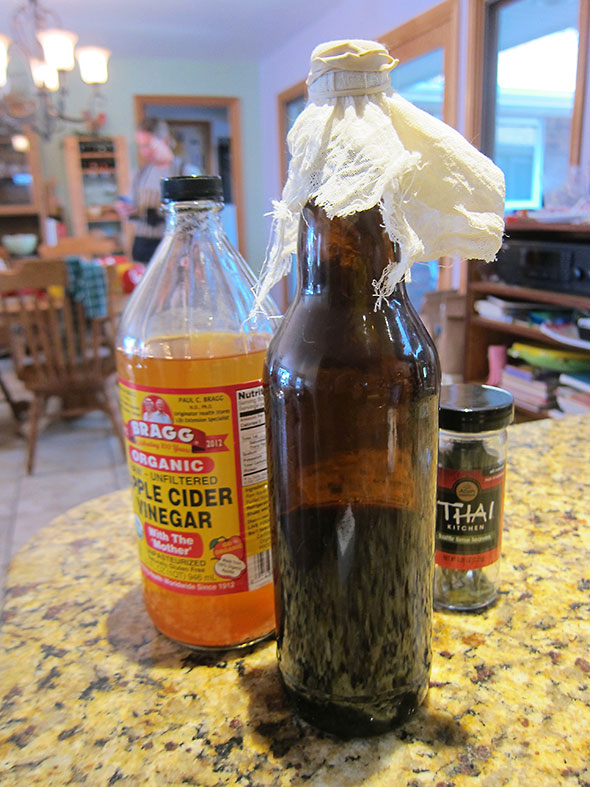 For the pulled pork, I could now choose between three vinegars: the re-stocked Bragg, the white wine vinegar, and the red wine vinegar. After sampling a drop of all three, I decide the red wine vinegar—housed in a special vessel that had once hosted the very first bottled beer from Yellow Springs Brewery, 305 N Walnut St—was the superior brew. I combine it with the brown sugar and the apple cider from Peifer’s and set the mixture aside. 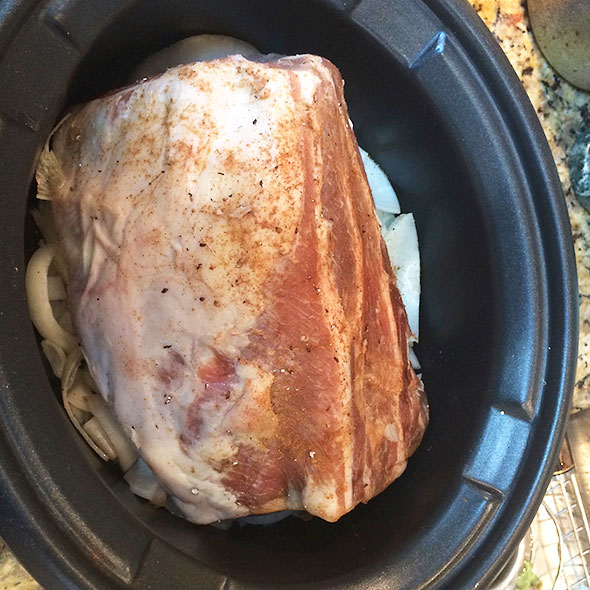 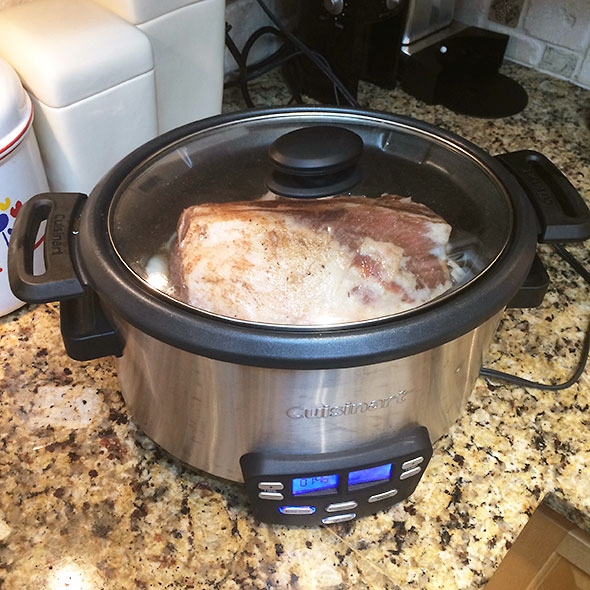 In prepping the dry rub for the shoulder, I decide to combine cinnamon, cumin, kosher salt, and grains of paradise. Grains of paradise are like pepper except that they have a citrus note to them. I get my supply of grains from Patti at No Common Scents and substitute them regularly for pepper especially in my stir fries.

It is best to prep the pork shoulder the night before so that the slow cook can be started first thing in the morning. The cooking process takes 8 to 12 hours. Plan on 12 hours, and you’ll be happier for it.

A good 10-12 hours before the meal, place most of the sliced onions in the base of the crockpot and top the seasoned pork shoulder and then other. Mix together the apple cider, the vinegar and the brown sugar until the sugar dissolves. Pour the mixture over the pork shoulder, place the kaffir lime leaves in the sauce, and add the rest of the remaining onions on top. Cook the pork on low for 8-12 hours until the meat reaches its desired tenderness and separates easily form the bone.

Pull the pork from the bone and into bite sized strips and serve. 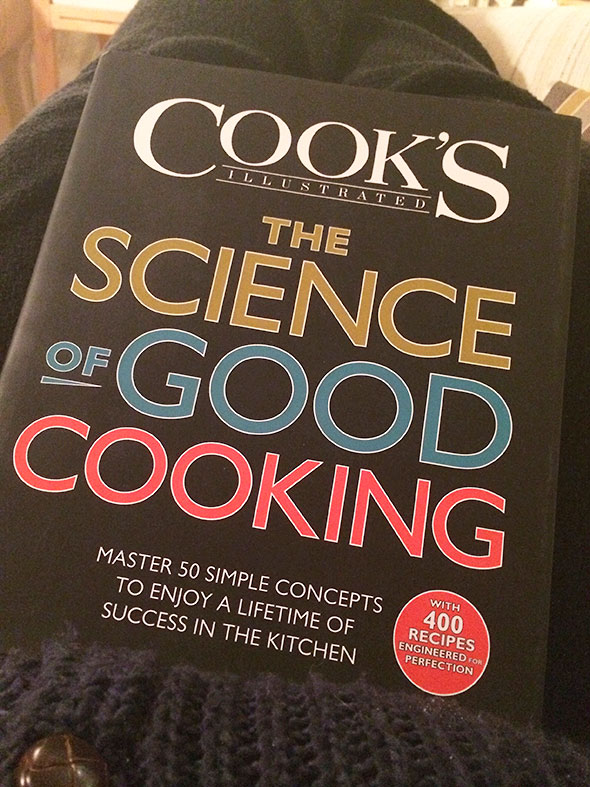 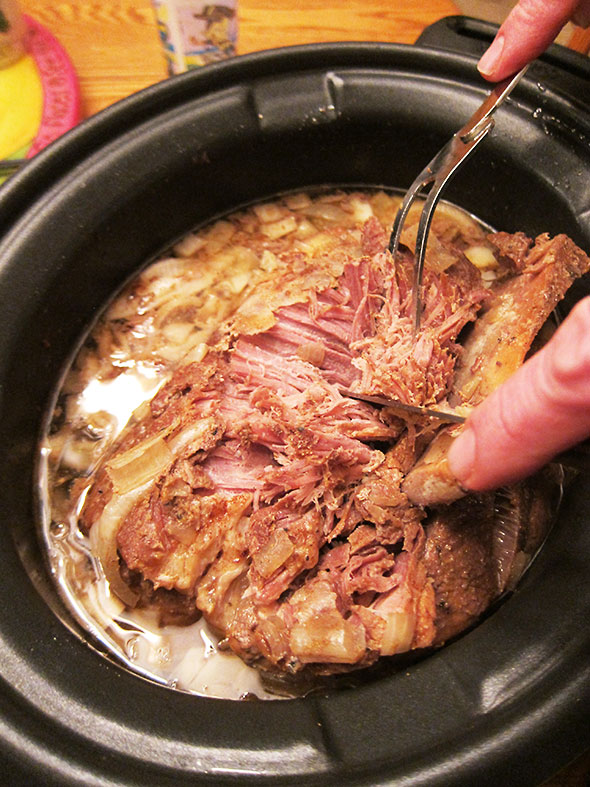 During the long wait until dinner, I pick up a new cookbook from Santa: Cook’s Illustrated on The Science of Good Cooking—and read the section on exactly why cooking the heck out of a piece of tough meat benefits it. In short, tough cuts require a long low heat to unwind the twisted strands of protein in the muscle’s collagen. Almost immediately, we can sense the goodness before us as the cider, cinnamon, and cumin scented the air, but the pages of the cookbook instruct patience. 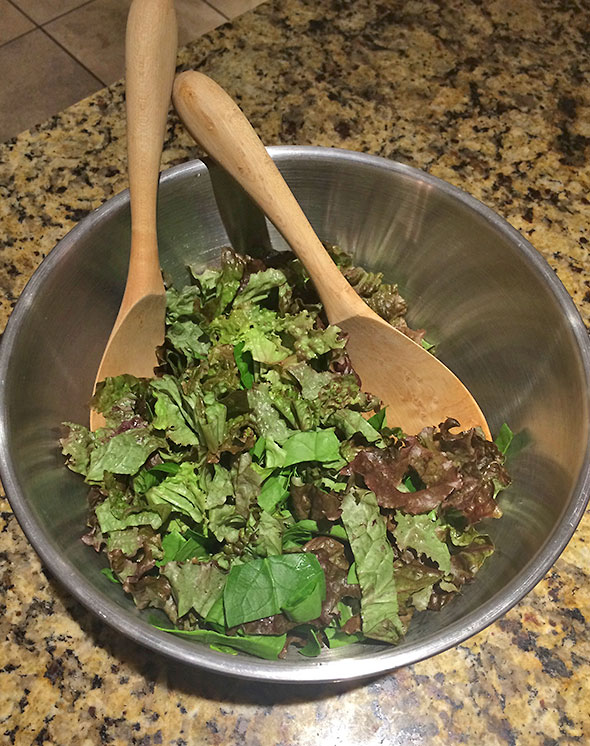 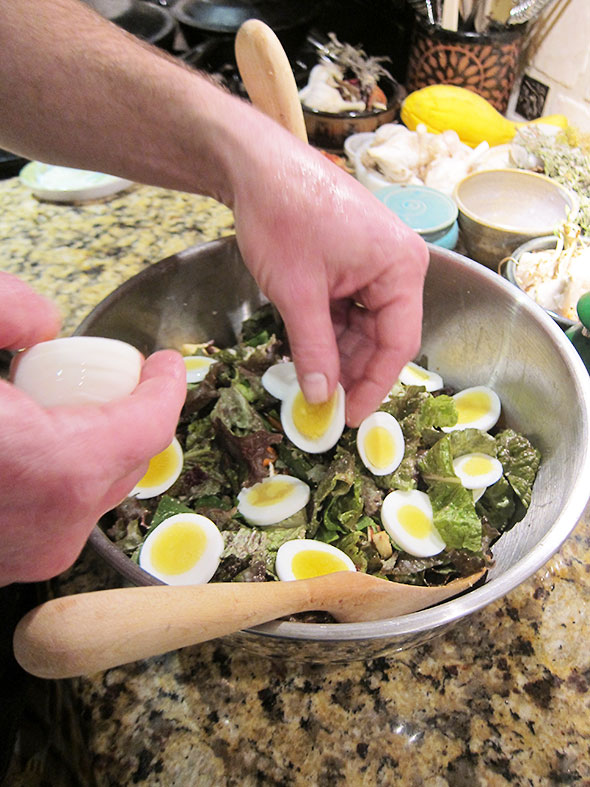 I can also sense my husband growing restless. In high anticipation of our dinner, he begins prepping a salad two full hours before we are scheduled to eat. Taking his time but feeling the need to create something rich and satisfying, he selects out his salad greens carefully and adds ingredients like a painter applying paint to a masterwork. 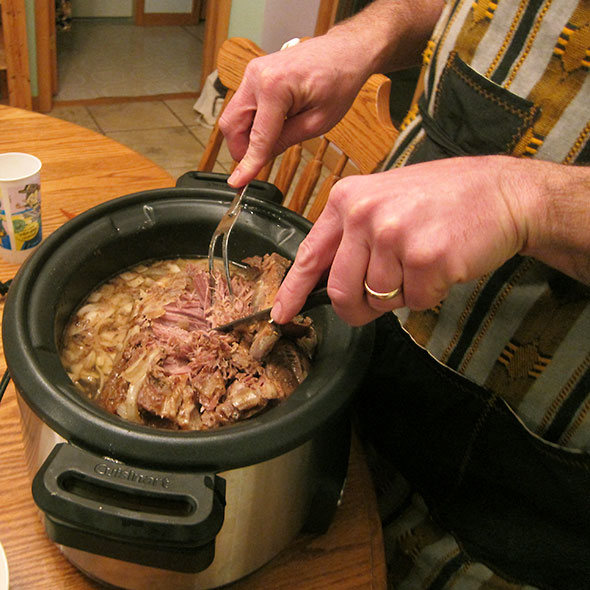 By the time we finally prepare our plates—splendid salad, tender pork, and spicy chips portioned in equal parts—we are intoxicated by the aroma of the sweet, spiced meat. And newly resolved to prepare pulled pork often.