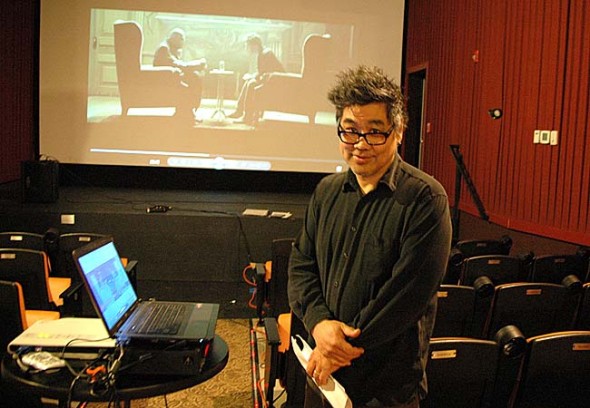 Local political theorist Kurt Miyazaki, who also owns the Emporium Cafe, gave a talk and showed film clips on the fascist aesthetic in films at the Little Art Theatre on a recent Saturday. Miyazaki, who used to teach a class on film theory and political ideologies at Wittenberg University, was the first speaker in a new Little Art series, “Let’s Talk Movies” that explores different aspects of filmmaking and cinema. It runs the first Saturday of each month. (Photo by Megan Bachman)

The Little Art Theatre gets a little bigger

On a recent Saturday at the Little Art Theatre, the political theorist-turned-coffeehouse owner treated theatergoers to film clips that explored fascism — from a 1934 Nazi party rally in “Triumph of the Will” to a fight scene in “The Matrix” — while they treated themselves to concessions.

The first in a new Little Art series, “Let’s Talk Movies,” Miyazaki’s talk drew a diverse crowd of about 40 young and old “students” to consider the question “Would Mussolini Like the Matrix?” For a film that Miyazaki says “makes violence look beautiful,” the answer was yes.

Miyazaki, who now owns the Emporium Cafe, said he enjoyed covering some material from his days as a Wittenberg University political science professor, a role he rarely gets to play these days.

“Let’s Talk Movies” runs the first Saturday of the month from 11 a.m. to 12:45 p.m. On March 1, a yet-to-be-determined speaker will delve into the history of the Academy Awards, while on April 5, Dean Leonard, an instructor at Sinclair Community College, will explore avant-garde cinema using clips from experimental short films such as “Un Chien Andalou” (1929), “Meshes of the Afternoon” (1943) and “Fireworks” (1947).

The new series is an opportunity for theatergoers to see rare films and learn more about cinema as an art form, while it broadens the educational reach of the theater, according to Little Art board member Jeannamarie Cox Peifer. Board member Roger Reynolds said the series will hopefully cover “something unusual that you won’t see in the big box theater.”

“It could be the technical side of production or costuming or changing roles for women and minorities or following an actor’s career or whatever,” Reynolds said. Other tentative topics are costume design and sound effects in film. After the April program, the series starts up again in October.

Another new Little Art series, “Retro Matinee,” kicks off at 3 p.m. on Saturday, Feb. 15, with the 1961 romantic comedy “Breakfast at Tiffany’s” starring Audrey Hepburn and George Peppard. The film was one of the top favorite films in a recent survey of Little Art patrons. Other fan favorites, including “Casablanca,” will be shown as part of the occasional matinee series.

And later this month, the Little Art will begin to rebroadcast London’s National Theatre Live events. The first in the series is the London theatrical production of Shakespeare’s “Coriolanus,” to be digitally screened on Saturday, Feb. 22, and Wednesday, Feb. 26. Tickets are available online or at the box office and the events are projected to sell out, according to Little Art Executive Director Jenny Cowperthwaite.

The new digital projection system installed last year as part of a half-million-dollar theater renovation is giving the Little Art more opportunities, Cowperthwaite said. In addition to rebroadcasting events such as National Theater Live, the theater can also now screen movies that were too difficult, or costly, to acquire on 35-millimeter film. The new offerings are yet another way the nonprofit can bring more people in the door, according to Peifer.

“I feel like we finally have this beautiful new facility and we want it to be hustling and bustling all the time,” Peifer said. Reynolds envisions more special events, private parties and speakers at the Little Art, which he sees as the community’s theater.

“We really want to use the space as creatively and extensively as possible,” Reynolds said. “I really think offering more movies, more entertainment and more educational programs is just part of the way we say ‘Thank you’ for supporting the Little Art.”

In other recent changes, the Little Art is no longer operating on “Yellow Springs time,” as films will now always start on schedule, according to Cowperthwaite. And the theater is relying more on volunteers in the concession stand and ticket booth to supplement its 15 part-time paid staff. Some 20 new volunteers have been trained in recent weeks.

“It’s a matter of reducing costs and improving customer service,” Cowperthwaite said. “People are doing this out of the goodness of their hearts.”