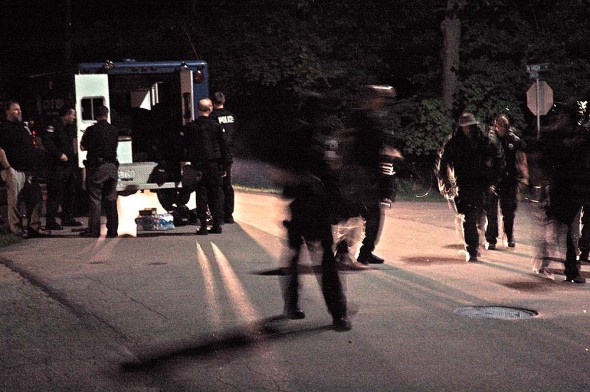 Police, sheriff personnel and two SWAT units were part of a shooting stand-off on July 30 of 2013, after responding to calls that an office had been shot at. (Photo by Matt Minde)

Seven months after the shooting standoff in Yellow Springs that ended with the death of Paul E. Schenck, the Montgomery County Sheriff’s department released the findings of an investigation of the two Greene County officers who fired weapons during the event. The findings, dated Feb. 18, were released to the public last week, immediately following the dismissal of Major Eric Spicer of the Greene County Sheriff’s Office, one of the officers who fired a weapon during the shooting on the night of July 30 and early morning of July 31.

Greene County Sheriff Gene Fischer declined to say last week whether Spicer’s dismissal was related to his conduct during or after the incident. But Montgomery County investigators found that Spicer violated five of the 13 allegations of improper conduct leveled against him by his department. He had been placed on paid leave since the shooting incident, per routine policy. Spicer had 24 years of law enforcement experience and had worked for the Greene County Sheriff for nine years.

The other officer implicated in the investigation, Deputy James Hughes, a sharp shooter with the Greene County Regional SWAT team, was found to have engaged in proper conduct by Montgomery County.

The Montgomery County investigation was initiated at Fischer’s request directly following the July 30–31 shooting. From August through November, investigators interviewed 33 officers from over a dozen agencies and reviewed reports from the BCI, dispatch records, the coroner’s report, and agency policies. Based on the information compiled, investigators sustained five allegations that Spicer had 1) failed to follow orders to set up a command post when he arrived on the scene, 2) failed to notify other officers or command that he had fired his weapon, 3) broken lights at a residence without notifying dispatch or command, 4) led officers to the wrong house, and 5) deleted the incident report he filed with his department on Aug. 7. Other related allegations against Spicer were dismissed due to lack of evidence.

A fuller story appears in this week’s print edition of the Yellow Springs News.

Click here to view the full report as a PDF.