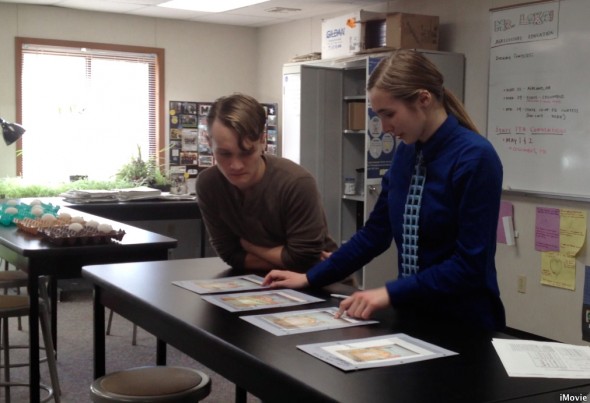 Zane Pergram and Isabella Long practice after school for their upcoming FFA competition in the poultry division. (Photo by Lauren Shows)

Ohio’s newest chapter of the Future Farmers of America Organization was born at YSHS this school year. Founded in 1928, FFA seeks to support agricultural education in schools. Brad Lokai, who teaches sustainable agriculture and horticultural science classes at YSHS and Cedarville High School, leads the group of about 50 students.

Some of those students have also chosen to participate in competitions against other FFA chapters in the poultry and dairy categories. The poultry and dairy teams, which are coached by Brad and his father, Larry Lokai, respectively, have seen success in their last few competitions, with the poultry team taking home first place honors at both the Miami Trace and Mt. Gilead invitationals recently, as well as second place in Ashland last weekend. The dairy team has also received high marks, placing seventh at Miami Trace.

“They’ve done pretty well for the first year,” says Brad Lokai. “In the 30-some years I’ve been involved with FFA, honestly I don’t know of a first year program that has done what they’ve done so far.”

In the contests, the poultry team is tasked with evaluating hens for their suitability in terms of egg and meat production, and must grade chicken carcasses and eggs against USDA standards. The dairy team, among other things, must be able to detect by taste whether a sample of milk is oxidized, malty or whether the cow has ingested onion, and must be able to run a test on a sample of milk to determine if it’s been made unsafe for public consumption by a cow infected with mastitis. According to Larry Lokai, because some of the competition involves a good sense of taste, contestants are advised to cut salty or spicy foods out of their diet in advance of a competition.

The poultry team includes students Isabella Long, Ashley Longshaw, McKenna Moore, Zane Pergram and Alexandra Snoddy. The dairy team includes students Tristan Campbell, Caylen Hall and Landon Rhoads. The YSHS FFA teams will compete in the state finals at the Ohio Expo Center in Columbus on March 29, and if they win big there, will continue on to national competitions.

Both teams practice Tuesdays and Thursdays after school. For more on the teams and a peek at one of their practices, watch the brief video below.