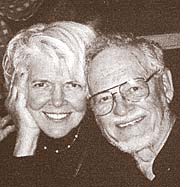 Byron Keys Dann died at Hospice of Dayton on Jan. 3, 2014. He had tolerated colon cancer until this past year, when it began to get the upper hand, then raced to a dramatic decline the last week of his life. Just days before he had been shopping, stopping for his usual choc malt on the way home.

Byron was a forgiving father and a loving mate. He flew in the sky, drove fast upon the earth, sailed on lakes and oceans and dived under the seas. He was always smiling, even when he slept, and he never met a stranger.

He was born on Feb. 18, 1918, in Columbus, Ohio to Archie Anson Dann and Maude Keys Dann. He graduated from Fairview High School in Dayton in 1935. He attended the University of Cincinnati, majoring in mechanical engineering, and graduated in 1940. He was inducted into Tau Beta Pi, the Engineering Honor Society and Pi Tau Sigma, the International Mechanical Engineering Society. That same year, he married Margaret Roxy Mikesell, with whom he lived and loved until her death in 1979. They had five children, who loved him very much; 10 grand and fifteen great-grandchildren all adored him.

Byron and Sylvia Carter Denny (Miller) met at Len Cargan’s interaction program at St. Johns Unitarian Universalist Church in Cincinnati, thus beginning a relationship of 33 years. 1999 found them settled happily in Yellow Springs. Byron truly relished his engineering career, and found much of his enjoyment in problem solving and designing systems for Procter & Gamble. It was very gratifying to open the kitchen cabinet, see the Jif peanut butter, and be reminded it was his creation.

After his retirement from Procter & Gamble in 1983, he continued to provide engineering consulting services. With retirement he could get serious with his new hobby, scuba diving, so at 65 he sailed and dived, completing 555 dives … stopping only because, as he said, “More people die diving after 85.” With the Cincinnati Dive Center he dived all over the world: Truk, Belize, the Red Sea and many other sites, returning to Palau, Micronesia, his favorite. With Earthwatch, he rejoiced in saving baby turtles who couldn’t find their way to the sea because of human lights confusing them. Regretfully, over the years he watched the reefs dying, from beauty to bone. In some dives, he used Nitrox, which elevated him to the level of “technical diver.”

He was never happier than captaining his 32-foot live-aboard catamaran, Away II. There he delighted in welcoming family and friends into the world of sailing. Grandchildren got to steer and learned about using a marine toilet on the high seas. He had fallen in love with this boat through the magazines, yearned for it until the Annapolis Boat Show, where he bought it on the spot. Who could resist? It was a sleek beauty; blue and white cushions spoke comfort in the roomy cockpit, accented by pots of gold mums.

Three months later, after his specifications were fulfilled, including a rare furl-rigged Jenny that became ordinary in years to come, he began the journey down the Intercostal Waterway. It was Thanksgiving weekend. Freezing rain didn’t dim his delight. But the well named Cape Fear river/lake did. He put up ‘til spring. Mark Farrar joined him in Miami and they proceeded into the Keys, which would become his and Sylvia’s sailing territory for the next l5 years.

He found a home for his beliefs at The Unitarian Universalist Church, St. John’s in Cincinnati, and the UU Fellowship in Yellow Springs, great places to give back through his engineering skills. He loved challenges: a new arch and elevator, a sky-high sound system at St. John’s, an armature for the “great wreath” used every Christmas since. Reversing hinges made bathrooms accessible for wheelchairs, and many more, all reminders of Byron. Music began to speak to him. His learning to play trumpet brought many opportunities in the three high schools he attended in Fort Atkinson, Wis., Dayton and Florida, where he introduced the marching band to formations.

In 2004 when Cathy Roma led the choir to our sister church in Romania, he found himself singing from the sister church’s dirt floors, plank seats, men and women divided … and on to cathedral size churches. He loved to sing, and was always an active choir member and an enthusiastic member of the YS Community Chorus. Every Thursday night, the Buzzards (because they circled around the notes) met to practice barber shop at our house, much to Corkie bird’s delight.

Because of his strong belief about war, Byron joined the peace vigil at its inception and met every Saturday, noon–1 p.m., on the corner of Limestone and 68. Two weeks before he died, he was there holding his sign: “Stop War.” He also took several trips to DC, to join in anti-war demonstrations. Although he did not fight in WWII, he was involved in the manufacture of plexiglass turrets for warplanes, he understood the costs of war and was deeply concerned about this issue. He had seen the effects of war when he was a volunteer orderly during WWII — he provided care to men who had been gassed in WWI.

Always yearning to fly, Sylvia finally challenged him with a birthday lesson. And then there was no holding him back: he fell for a sweet little ultralite. We all felt relief when he stopped flying that butterfly. About the same time, he could be seen on a spiffy yellow and white scooter, getting it almost up to 42 miles per hour. He persisted riding it until last fall when, after a spin down the block, he decided his balance wasn’t up to it. He would be 96 soon.

He made a least two after-life plans over the last decade, but never really expected to die, even in the hospital, not that he was afraid, it just wasn’t in his book. He eschewed funerals, choosing instead a celebration that would include Shelley Benham Jackson’s wonderful song “We Laugh, We Cry,” the life cycle in words and music.

The celebration will be Saturday, May 10, at the Glen Helen Building, 405 Corry St., Yellow Springs. Gathering 11:30 a.m., program at noon-ish. Lunch follows. You will want time to linger over the life line exhibit created by the Jon Dann family. Gifts may be sent to Glen Helen Association, the UU Fellowship of Yellow Springs, PO Box 480, Y.S., 45387, Planned Parenthood or the charity of your choice. Serving ready desserts welcome. Those with questions should contact Sylvia, Ted, or Jon.