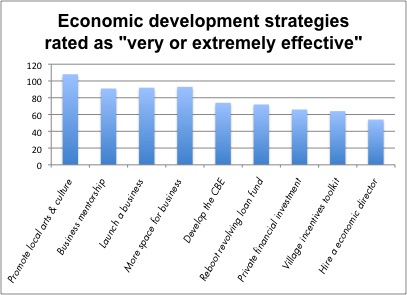 Villagers weighed in on how Yellow Springs should grow its economy in a recent YS News survey.

That’s how many villagers summed up the problem with the Yellow Springs economy in a recent online survey.

A total of 303 residents of Yellow Springs and Miami Township participated in the 20-question survey, which ran from April 25–May 11.

Survey respondents noted that a combination of high local housing costs and a seeming abundance of low-wage service industry jobs here are driving many low-wage workers to live elsewhere, while most local residents now commute to higher-paying work outside of town.

The economic pressure is not only on younger workers. Many retirees on fixed incomes are feeling the stress of stagnant tax revenues from local payroll in the form of a growing property tax burden, according to those surveyed.

The importance of the two issues — housing and jobs — was underscored by the fact that the top two village goals for those surveyed was a healthy economy, followed by affordable housing. Energy conservation and sustainability and infrastructure and services came next.

Click here for comments on how the YS economy is HEALTHY

Survey respondents also identified the decline of large local industries over the last few decades, the paucity of new businesses coming or starting here, the lack of diversity in local jobs, an overreliance on tourism and a negative attitude toward businesses as ways that the Yellow Springs economy is unhealthy.

Click here for comments on how the economy is UNHEALTHY

At the same time, tourism was overwhelmingly seen as one of the bright spots of the local economy, bringing in outside money and contributing to a “thriving downtown,” according to those surveyed. The village would do best to promote local arts, cultural and recreational assets, a strategy identified as the most effective way of growing the economy. 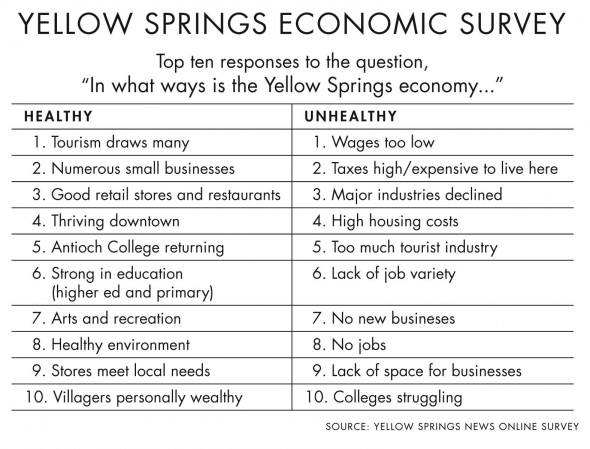 “We draw a lot of visitors to town who shop, dine, recreate and enjoy our cultural offerings,” a local female professor who works in Fairborn wrote. “Antioch College is beginning to rebound. We have a critical mass of small businesses that serve local residents.”

What Yellow Springs needs most are jobs that pay a living wage, especially in the technology field, along with more professions like architects and doctors and jobs in manufacturing, according to survey participants. The village should capitalize on its strengths in education, sustainable food and energy production, health and wellness and the arts and tourism in revitalizing our economy, they said.

Growing established local businesses and helping startups here should take precedence over attracting new firms to town, survey respondents added, and after promoting Yellow Springs’ cultural and environmental assets, the village should create a business mentorship program for entrepreneurs and launch a business incubator, other highly-effective strategies for economic development.

Read articles in the May 15 and May 22 issue of the News for the full story.