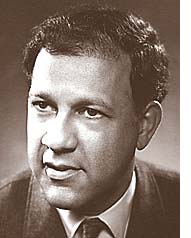 Paul Webb, M.D., long-time resident of Yellow Springs and research scientist of international renown, died peacefully in his Yellow Springs home on May 18, at the age of 90.

Dr. Webb was born in Willoughby, Ohio, on Dec. 2, 1923, to Monte Bourjaily and Barbara Webb. The Bourjaily children included Vance Bourjaily, author of novels, short stories, essays and reviews, whose works were acclaimed by critics, who likened them to those of F. Scott Fitzgerald and Ernest Hemingway.

Always an enthusiastic student, young Paul received his M.D. from the University of Virginia in 1943 and an M.S. in physiology from the University of Washington in 1949. He accepted a position at a hospital in Montreal, Canada, where he met and was smitten with a young nurse named Eileen. She became Eileen Webb on March 13, 1948. He served in the U.S. Army from 1948 to 1950, taught physiology at University of Oklahoma medical school from 1952 to 1954 and worked at the Air Force Biomedical Laboratory at Wright-Patterson Air Force Base from 1954 to 1958.

In 1959 he founded Webb Associates, a research company, in Yellow Springs. Webb Associates performed several major research studies for the U.S. Department of Agriculture, the Office of Naval Research and the Air Force.

While working with the Office of Naval Research, Dr. Webb developed an interest in protective clothing for persons working in dangerous environments — an interest that stayed with him throughout his life. With support from the National Aeronautics and Space Administration (NASA), he began work on a very lightweight elastic space activity suit that greatly reduced the physical energy required of the wearer, as well as enabling the wearer to move about with much greater freedom and comfort than with the established NASA suits, which were cumbersome and heavy.

Shortly thereafter Dr. Webb designed and built his famous calorimeter, a wearable device for measuring the heat produced by the human body. It consisted of an undergarment in which closely spaced water-filled tubes worn next to the skin absorbed heat from the body; as water was pumped through the tubes, it carried the heat through a specially designed computer that precisely measured the heat and displayed and printed the result in calories. The system could thereby tell how much heat energy the body used at rest and in various kinds of activity. When worn, the calorimeter was connected to the computer by an “umbilical cord” containing the many cords and tubes involved, but the subject was able to move about in normal activities with relative ease and comfort.

The calorimeter could also be used to manipulate the human subject’s body temperature to compensate for discomfort experienced in too-warm or too-cool work environments.

Dr. Webb closed his Yellow Springs laboratory in 1982 and moved to France. There he performed experiments at Hospital Bichat in Paris. From 1984 to 1988 he worked in various technical companies and universities in Norway, the Netherlands and Sweden.

During his career Dr. Webb received a great many awards for his work; two of these awards are the Fritz J. Russ Award in bioengineering and the Jeffries Aerospace Medicine and Life Sciences Research Award from the American Institute of Aeronautics and Astronautics, notification of which he received a short time before his death.

The forgoing is prologue — statistical, sad, expected. What follows is a series of commentaries on the man — Paul, our neighbor, our friend, our fellow citizen, our tennis buddy, our compañero — the peace-loving, gentle, generous guy who would invite you to a gourmet dinner he had cooked at home the night before he had to fly to Switzerland to receive an award for outstanding work in the field of bioenergetics.

Paul’s fame was something he never talked about. In fact, he seldom spoke of himself, his problems or anything else that made him so thoroughly human. He had a wonderful singing voice, a piercing Irish tenor that was exciting to those fortunate enough to hear or sing with him in groups performing classical, broadway, folk, madrigal, gospel or (especially) barbershop songs. He also soloed in many performances in and around Yellow Springs.

He rarely spoke of it, but Paul continued to take voice lessons from a professional vocalist and teacher until his death. Many other vocalists in the area commented frequently about how his voice kept getting better. He was scheduled to rehearse with a new barbershop quartet, brought together by local musician Beverly Logan, the day after he died.

Paul was well known for his singing and acting roles in the Gilbert and Sullivan operettas mounted by Yellow Springs Center Stage, for many years a distinguished community theater on Dayton Street. As an enthusiastic and able tenor he was called on to play difficult roles such as that of Coco in “The Mikado,” a fussbudget politico in the imaginary Japanese town of Titipu.

The role called for the singing of a particularly difficult patter song, consisting of many words sung together very, very fast, as in “I am the very model of a modern major general,” from another Gilbert and Sullivan operetta. He received wild applause for these performances.

Although he was hesitant to speak of his work, many townsfolk who expressed interest in his accomplishments were rewarded by Paul with copies of his books — often to their consternation when they got the books home and tried to comprehend the complex scientific language, formulas and illustrations.

Paul was a favorite partner — and opponent — of tennis enthusiasts in the area. He played the game in Yellow Springs for many years. Unless a business trip or a scientific event intervened, he usually spent a couple hours every day on the courts. The Antioch College courts on Livermore Street were the usual venue. He contributed to the resurfacing and other improvements to the courts a few years ago.

His friendship was of a special cloth, treasured by all who shared it and envied by all others who knew him. Although he was a private man, cherishing his cloistered time for work, reading, writing, and listening to music, he extended his help and friendship to anyone who desired his attention.

His gregarious nature was visible in his membership in the Tuesday Group, a gathering of five notably intelligent, accomplished, productive, interested and interesting men in the village — Victor Ayoub, Sam Bachtell, Paul Cooper, Hardy Trolander, and Paul Webb. These cognoscenti met weekly, usually in Sam’s house, to discuss books, music, politics, visions of civic health for the village, and anything else that came to mind.

In Paul Cooper’s words, “Anything that one of us found lying around near the roadside was a valid subject for conversation. We talked about everything!”

Cameraderie — and love, most admitted — waxed strong and lasting among all these men, and tears abounded during interviews with them.

“It’s really tough,” Sam said, “when people you’ve grown up with, and loved and shared your heart and mind with, suddenly are gone. I can’t believe I’ll never see my good friend again.”

Victor harkened back to Paul’s culinary expertise, citing many meals they had shared, usually with Paul as principal chef.

“A favorite meal we sometimes cooked together,” Victor said, “was a Lebanese dish (both Paul and Victor were of Lebanese extraction) called kibbe bi saniye. It contained lamb (kibbe) and cracked wheat (called “bulger”) cooked with herbs and spices in separate pans. It sounds pretty awful, but it was delicious!

“But in general,” he added, “in cooking, Paul was the hands-down leader!”

All these men, and many others expressing their sadness at the loss of Paul, agreed on the profound devotion Paul displayed in his relationship with wife Eileen throughout their 66 years together.

“He always deferred to her comfort and pleasure,” said Dr. Jim Agna, who for a few years lived next door to Paul and Eileen on Orton Road. Mary Agna, also a noted physician, said, “You usually don’t refer to a man as sweet. But you can’t deny that he was!”