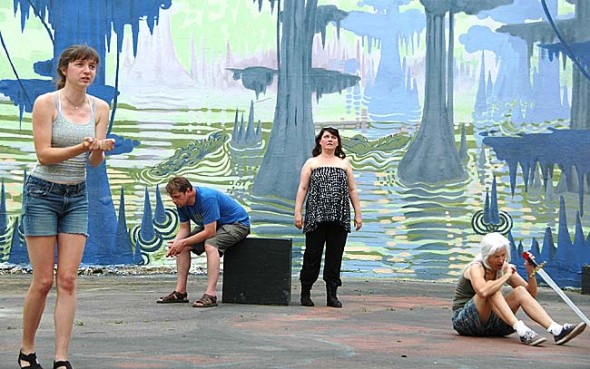 Charlotte Walkey, left, gave an impassioned monologue as Joan of Arc during a rehearsal for “D’Arc Comedy,” a play that opens at the Antioch Amphitheatre at 8 p.m. Saturday, May 31. Behind Joan, looking on unimpressed by her speech, are the saints of her visions, St. Michael (Thor Sage), St. Catherine (Miriam Eckenrode-Saari) and St. Margaret (Ali Thomas). “D’Arc Comedy” is the first production of the new Yellow Springs Theater Company. (Photo by Megan Bachman)

Starving in a prison cell in France awaiting trial for heresy, the 15th century teenage heroine Joan of Arc had little to laugh about.

But add comedic banter between the saints in her visions, a puppet show reenacting the entire 100 Years War between France and England, and the high drama of a modern cable television talk show, “Saint Chat,” and suddenly a story that ends with a burning at the stake may seem funny.

“It’s funny until it’s not — then it’s funny again,” explained Lorrie Sparrow, who is directing the regional premiere of “D’Arc Comedy,” which opens at 8 p.m. on Saturday, May 31, at the Antioch College Amphitheatre, 910 Corry St.

Written by Wanda Strukus of Boston College, “D’Arc Comedy” tells the tale of the Maid of Orleans — the peasant with spiritual visions who became a war heroine and ultimately a saint — while exploring themes like religion, network TV and God’s direct involvement with the world. It’s also hilarious, which is a testament to an “impressive script,” cast members say.

“You go from incredibly funny to very serious and poignant and back to funny — which is hard to write,” said Ali Thomas, who plays St. Margaret.

The 16-year-old Walkey wasn’t laughing on a recent sticky evening at the Antioch Amphitheatre while rehearsing a monologue about deep hunger and spiritual conflict — “And every day there is less of me,” she seethes.

Sparrow constantly interrupted with direction — “Do it again. Make it angrier” — until Walkey broke down and needed a moment to regroup.

“It’s hard for anyone to be emotionally vulnerable on stage — and [Charlotte] has to do it a lot,” Sparrow turned aside and said. “But it’s the work. And we are blessed to have an age-appropriate Joan who can do the work.”

To perform such a “strange vehicle” as a comedy about Joan of Arc, Sparrow said she needed actors who could trust one another, which she sees in the Yellow Springs Theater Company, a group of around 20 local actors who are mainly alumni of the revived Center Stage Theater.

Sparrow said the new company hopes to operate as a cooperative and to put on more local work and “not safe work.”

“We want to challenge the community with works that are riskier,” Sparrow said. Sparrow has directed three of the four Center Stage shows since its revival in 2011, including “Our Town,” “The Crucible,” and “The Threepenny Opera” and many members of the Yellow Springs Theater Company performed in previous Center Stage shows.

“Center Stage is alive and well and a valuable piece of the community,” Sparrow went on. “We wanted more artistic control and to be more like a commune.”

Though Sparrow is directing the company’s first show, members will rotate as playwrights, directors, actors and producers and show proceeds will eventually be shared among members, she said. At first, however, money from ticket sales will be rolled back into the company. The next show for the Yellow Springs Theater Company is an original play by Thor Sage called “Killers.” Upcoming shows may also include “Godspell” and “Inherit the Wind.”
Last fall, the playwright Strukus flew in from Boston to choreograph Center Stage’s production of “The Threepenny Opera,” but has long been a collaborator of Sparrow’s. They were both part of the Women’s Theater Alliance in Chicago and previously workshopped “D’Arc Comedy” in 1997, when Sparrow chose to work with Strukus’ script over that of now-famous comedian Tina Fey.

While “D’Arc Comedy” was performed in Chicago and Louisiana, it has not yet been staged in Ohio or the larger region. The group of local actors has been tackling the material since the beginning of April, and often spends long days together getting it right. Without startup funds, company members have had to do a lot of the work themselves, and last Sunday spent eight hours making puppets, painting and rehearsing. Many more from the community are chipping in. Antioch College donated the amphitheater, the Yellow Springs Arts Council is providing event insurance through its membership program and Strukus waived her royalties for the script.

“We don’t have any money,” Campbell explained. “For us, it’s our pursuit of good art.”
Sparrow added that the Yellow Springs Theater Company is comprised of many people who have worked professionally in theater, and is setting its expectations high.

“We want to treat this as a professional theater opportunity for Yellow Springs,” Sparrow said. “If you’re going to start a theater company in a town known for artistic excellence, you have a high bar to reach,” adding: “It’s also just fun to make art with friends.”
For more information, contact Ara Beal at 937-562-1328 or aragbeal@gmail.com.