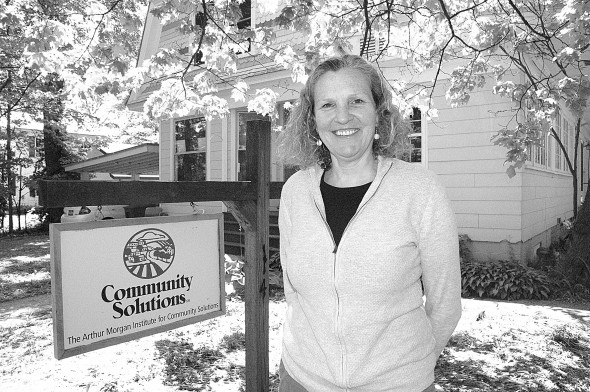 Susan Jennings of Marion, Mass. is the new executive director of the Arthur Morgan Institute, a non-profit organization on East Whiteman Street that promotes solutions to global climate change. (Photo by Megan Bachman)

News about environmental concerns is frequently grim and overwhelming. What can a single person do?

Quite a bit, according to a tiny Yellow Springs nonprofit. And the organization just hired a new director to help spread the word that ordinary people can make a difference.

“What’s inspiring to me is that, as people wake up [to environmental concerns], they won’t be starting from scratch,” said new Director Susan Jennings of the Arthur Morgan Institute of Community Solutions. “The tools are already here. And the role of Community Solutions is to highlight the tools and solutions so people don’t need to despair. There are many reasons people can feel hopeful.”

Jennings comes to Community Solutions from her previous position as head of the sustainability office at the University of Massachusetts in Dartmouth, Mass. There, she discovered that while academics from many disciplines held critical pieces of the environmental puzzle, those academics seldom spoke with each other, a problem she believes reflects the larger society.

This fall Community Solutions hopes to provide a venue for those conversations when the nonprofit presents its annual conference. The conference, titled “Climate Crisis Solutions: Curtailment and Community,” will take place in Yellow Springs Nov. 7–9 at Glen Helen. Persons interested in attending should contact the nonprofit at 767-2161.

Community Solutions leaders hope the event helps participants feel empowered around climate change issues by showing doable actions available to everyone.
“One of the big messages that Community Solutions can bring is that, yes, we’re heading toward rough times, but community strength can come forward,” said Faith Morgan, the nonprofit’s media director.

The actions relate to three main areas of energy use: transportation, food production and home energy use. Regarding transportation, Community Solutions has for years researched and advocated ride-sharing strategies, which are now becoming more mainstream through such companies as Uber and Lyft. The group’s research director, Pat Murphy, who is married to Faith Morgan, included ways to cut down transportation energy use in his book, “Plan C: Community Survival Strategies for Peak Oil and Climate Change,” which was published by the nonprofit.

In terms of food production, the upcoming conference will offer information on carbon sequestor farming, which includes farming techniques that “biochar,” or store carbon in the soil.

And the group has most recently focused on ways to conserve energy in the home. This spring, Community Solutions released its second documentary film, “Passive House Revolution,” which highlights the passive house construction technique used extensively in Germany and other European countries that can slash home energy consumption by 90 percent.

Strategies to address Peak Oil and climate change may seem a stretch from the initial purpose of the nonprofit, originally named Community Service when founded in the 1940s by former Antioch College President Arthur Morgan to promote the value of small communities. But the environmental focus isn’t a stretch at all, the group’s leaders believe, because these individual actions all relate to the value of community.

“There’s a connection between our community and our individual actions, and it has to do with the sharing of rides, of meals, of housing,” Jennings said. Community Solutions leaders believe, as did Arthur Morgan, that the small community is essential to healthy living and especially that small towns provide the community support needed to address coming environmental changes.

After Morgan retired from heading up Community Service in the 1960s, his son, Griscom, took over, and after Griscom’s death his widow, Jane Morgan, ran the organization. It continued its focus on intentional communities, holding a yearly national conference on the topic.

After Jane retired in the mid 90s, Marianne MacQueen became director and with the help of newsletter editor Don Wallis, the organization focused more on local topics, in the process gaining more local support.

After MacQueen left to become executive director of Home, Inc., the organization was briefly in hiatus while leaders looked for a new focus. While Faith Morgan and Murphy lived in California at the time, they were deeply involved in the organization founded by Morgan’s grandfather.

Around 2003, energy issues took national center stage, and Murphy and Morgan began studying Peak Oil, the point at which the world’s oil reserves begin to decline. While the exact date of peak oil was not known, it was clear that world oil production would decrease in the near future, contributing to international shortages and likely world crisis.

Murphy, who had founded a software company, became deeply involved in researching the Peak Oil issue and in 2003, he and Morgan moved to Yellow Springs, where he was named the new director of Community Solutions, which now focused on the Peak Oil issue.

“We thought that if Arthur Morgan were around, he’d be asking, ‘What’s needed in the world today?’” said Faith Morgan.

The nonprofit’s new focus led to the hiring of Megan Bachman, (who now works for the News), who organized the nonprofit’s annual conference. Community Solutions leaders also traveled to Cuba, where they filmed the nonprofit’s first documentary, “The Power of Community: How Cuba survived Peak Oil.”

The film has gained a wide audience, having been shown in festivals in 38 countries and translated into Chinese, Arabic and Japanese, among other languages.

“The film put us on the map,” Faith Morgan said.

In recent years Murphy stepped back as the nonprofit’s director to focus on research, and Morgan stepped in. Now, having produced and directed two documentaries focused on energy conservation, Morgan has become increasingly committed to film-making as an educational strategy. She is currently working on a new film, “Earth Island: Energy and Community,” and continues as the nonprofit’s media director.

Jennings, who officially began her position the beginning of June, recently moved to the community. She’s thrilled to be able to bike to work and take advantage of the benefits of living in a small community, as originally espoused by Arthur Morgan.

“I’m excited to be here,” Jennings said. “It’s easy to talk about the value of small communities while living in Yellow Springs.”