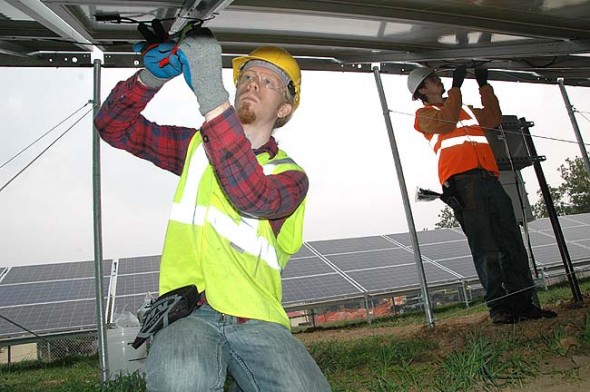 A one-megawatt solar farm recently popped up at Antioch College along Corry Street as part of the college’s plan to become carbon neutral.

Around 3,300 solar panels were erected behind fences on five acres of Antioch property commonly known as a the “golf course.” The panels could begin turning sunlight into electricity for the college later this month, according to Physical Plant Director Reggie Stratton.

A ribbon-cutting ceremony for the Antioch solar farm is 5 p.m. Friday, Oct. 10, before the annual community potluck.

The solar installation will generate 1.2 million kilowatt-hours per year and is expected to offset the electric consumption of Antioch’s $8.8 million geothermal heating and cooling plant, according to a news release.

By 2018, an estimated 90 percent of Antioch’s electric consumption will come from renewable sources as the college looks to be among the first in the nation fueled almost exclusively by green energy, the release added.

“We are proud to be moving forward with these significant investments in clean and renewable energy,” said President Mark Roosevelt in the release. “The new Antioch College is starting at a time when it is abundantly clear that the way we live in America today is not sustainable. We believe we have an obligation to address these issues and have an opportunity to be a model for others.”

Antioch also released the name of the project’s investor, SolarCity. Based in California, SolarCity is the nation’s largest solar service provider, according to the news release. Under an agreement with the college, SolarCity will finance and own the array while selling the power generated to the college at set prices. Solar, Power and Light of Miamisburg was contracted to build and maintain the array.

Future plans for the solar farm include a replacement of the temporary fence along Corry Street, the planting of around 100 trees, bushes and shrubs along fences and the installation of 18 art panels from college and community artists on the fence between the two solar arrays.