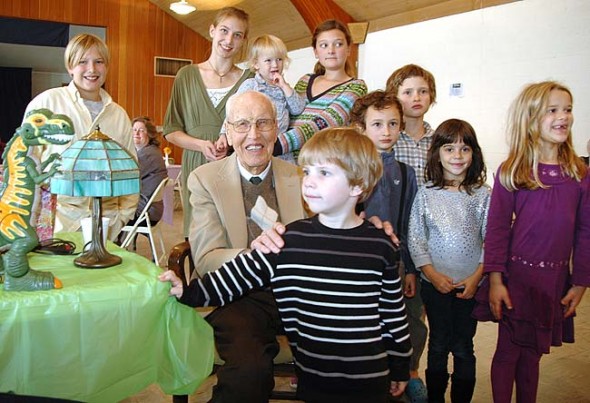 The gathering following the Sunday morning Oct. 19 worship service at First Presbyterian Church was nothing but joyous as more than 100 family, friends and admirers of parishioner Lloyd Kennedy celebrated his 100th birthday at his spiritual home for the past 64 years.

“I don’t think I know anyone else who is 100 years old,” said church member Libby Rudolph, with a note of wonder in her voice, as Kennedy accepted congratulations and well-wishes in a seat of honor at the center of First Presbyterian’s community room.

Kennedy’s son, Todd Kennedy, noted that his father’s birth year coincided with the start of the Great War, only later to be known as World War I. Born in a time when the world was tearing itself apart, Kennedy has devoted his life to the beauty and replenishment of the earth.

Well known in Yellow Springs for his work with the Tree Committee, and often referred to as “the tree man” by many locals, Kennedy has never been one for the spotlight or to take credit where he thinks it isn’t due. He’s always made it clear that while many call him “the heart and soul” of the Tree Committee, the group responsible for planting more than 2,000 trees and shrubs throughout the village was founded by others, and it accomplishes its work through the efforts of many.

Even Sunday, in the midst of a celebration focused on him, he deflected praise to others ­— most notably his wife of eight years, Fay, who served as hostess of the birthday fete.

“She was a life-saver,” Kennedy said of his second wife. Kennedy’s first wife, Mary, died in 2003, after 53 years of marriage.

A native of Terre Haute, Ind., Kennedy moved to Yellow Springs in 1938 after earning a masters degree in agronomy from Ohio State University. Early employment included a company at Antioch that produced hybrid seed corn, but eventually Kennedy went to work for the Ohio Department of Agriculture, retiring in 1980 after nearly four decades.

Having been involved in several major tree planting efforts in the village in the 1970s, Kennedy’s retirement gave him more time to work with the local Tree Committee from its official founding in 1982.

Regardless of Kennedy’s refusal to take credit for the group’s beginnings, former Tree Committee president and one of its originators, Evelyn LaMers, counts him as a founder.

“I’ve known Lloyd for 35 years, and I just adore him,” LaMers said. “He’s an enthusiastic, interesting, good-humored person who gets things done.”

She shared an anecdote she says sums up his personality and spirit: Two years ago, he was scheduled to have quintuple bypass surgery, and she went to visit him in his home a couple of days before the operation. While she was there, he got a call from a Tree Committee volunteer doing some work at Ellis Pond. The volunteer had run out of fuel for his equipment. Kennedy told him, “I have a visitor right now, but I’ll be down in 20 minutes with more fuel.”

LaMers said she was incredulous, telling Kennedy he should be resting, not going on errands. “He looked at me with such conviction and said, ‘It’s the Tree Committee that keeps me going.’”

Anna Bellisari, who has also served as Tree Committee president, said Kennedy has been a consistent source of inspiration for committee members and villagers over the years, and he remains so at the age of 100.