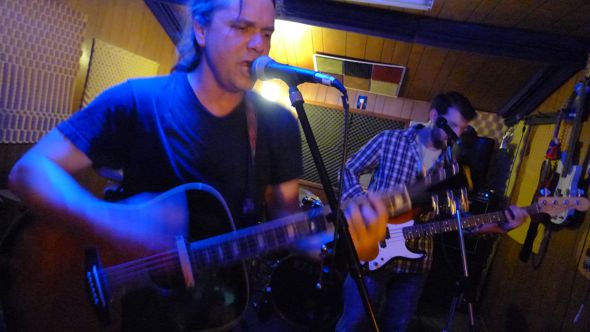 Stark Folk Band plays rock 'n' roll as it was meant to be – loud and liberating. Here in Millworks Studio Z is Brady Burkett and Dave Jurcsisn.

Joining Burkett on rhythm guitar and Shaffer on lead guitar in the lineup are bassist Dave Jurcsisn and Jeremy Malchow.

Stark Folk plays at a release party for its new record at Peach’s Grille on Friday, Oct. 3, with local band Speaking Suns, which takes the stage at 10 p.m. Stark Folk starts at 11:30 p.m.

Speaking Suns plays its last local show before hitting the road in support of its new LP, Vanishing Country, released by Great Guys Music in September.

The two-song 45 rpm “Modern Times/Ode to a Legend” showcases the band’s straightforward songwriting over two tracks rich with punchy rhythm guitar, potent electric leads and memorable refrains. They are songs itching to be sung along to. As Burkett says, “Rock ‘n’ roll is supposed to fun. It’s not supposed to be a drag.”