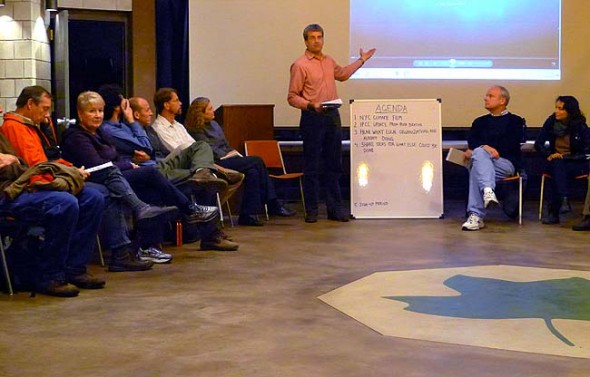 About 60 people attended a Climate Conversations event last month where resident and University of Dayton physics professor Bob Brecha, shown above, gave an update on the scientific consensus on climate change. The next Climate Conversation is 7:30 p.m. Tuesday, Nov. 4, at the Glen Helen Ecology Institute. (Photo by Megan Bachman)

At a meeting organized locally after the march — the first Climate Conversation — about 60 people shared steps they are taking to cut greenhouse gas emissions here and ways they could together spur more change in the village and world.

For example, Brett Henderson is working on a community solar project where residents buy a share in an array in town. Tom Clevenger wants to develop a zero waste plan for Yellow Springs. Alice Robrish is part of a group of local Quakers in a protest against a bank financing mountaintop coal removal. Others are leading climate change book discussion groups, working to bring back pollinators, pushing for a federal carbon tax or encouraging the village to ban plastic bags.

And one local climate change organization, Community Solutions, hopes to pull all the pieces together.

The local nonprofit Community Solutions is optimistic that the ongoing dialogue will help individual villagers learn ways they can become more sustainable in their lives and help the community cut more carbon emissions too, according to Executive Director Susan Jennings recently.

“A lot of people here are concerned about the climate and you feel like you’re on your own so it’s nice to see the concern of your neighbors,” Jennings said. The group might develop a comprehensive Climate Action Plan for Yellow Springs, Jennings added.

Heinberg, author of 11 books on energy and economy including “The Party’s Over” and “The End of Growth,” will “set the context” for the need to make drastic personal cuts in energy use, Jennings said. However, most of the conference will focus on what people can do to make changes in their lives and communities.

“We assume people know about climate change and are looking at ways to take personal responsibility and ways to take leadership in their community,” Jennings said. “This is for people who are looking for tools.”

Community Solutions held four conferences on peak oil in Yellow Springs from 2004–2007 and another in Michigan in 2008 before putting its annual event on hiatus. Community Solutions Board member Faith Morgan said the conference was brought back after the organization had switched its focus from peak oil to climate change and had “learned a lot that we needed to share.” While the conference “preaches to the converted,” it is important that the “converted make sure we are headed in the right direction,” she said.

“Other conferences talk about all the technical things we could do but we talk about reducing [carbon emissions],” Morgan said. “We’ll do better if we do it sooner, rather than being forced to when we go over the cliff.”

The event’s other keynote speaker is Jim Merkel, author of “Radical Simplicity,” who will suggest dozens of lifestyle steps that “lighten ecological footprints and the heaviness of a world going sour,” according to an event flyer. Merkel, who Morgan said “lives on $5,000 per year and shows how saving energy can be fun,” speaks at 7:30 p.m. Saturday, Nov. 8, at the Vernet Ecological Center. Attendees can register for a single keynote, a one-day pass or the entire weekend.

Traveling from Cuba to speak at the conference is Mario Arrastía, energy specialist at Cuba Energía and author of five books, including “The Undefeatable God Sun.” He will talk about Cuba’s recent energy revolution, during which the island nation replaced its incandescent light bulbs and inefficient appliances while decentralizing electric power, according to Morgan. Arrastia is one of the Cubans to be featured in a new film that Morgan is working on as a follow-up to Community Solutions’ 2006 “The Power of Community: How Cuba Survived Peak Oil,” which sold nearly 20,000 copies and was translated into 18 foreign languages.

Liz Walker, who helped start EcoVillage at Ithaca in Ithaca, N.Y. will talk about a recent project to build small homes at the ecovillage to LEED platinum and Passive House standards that are 90 to 95 percent efficient. Martin Heller, researcher at the Center for Sustainable Systems at the University of Michigan, will speak about life cycle assessments for food and agricultural systems and low emissions diets. Peter Bane, publisher of the Permaculture Activist magazine, will talk about his pioneering suburban farm in Bloomington, Ind. and the importance of protecting the “commons.”

Resident Eric Johnson will talk on a panel about his household carbon emission reductions, which he cut to one-quarter of what it was a few years ago by retrofitting his home and installing solar panels. Pat Murphy, research director at Community Solutions and author of “Plan C — Community Survival Strategies for Peak Oil and Climate Change,” will present his new lifecycle assessment tool, “Curtailers Emission Guidebook.”

Home energy expert Linda Wigington, founder of the Affordable Comfort Conference and the Thousand Home Challenge, will talk about ways to cut energy use in housing. And Yellow Springs resident Bob Brecha, a University of Dayton physics professor and visiting scientist at the Potsdam Institute for Climate Impact Research in Germany, will give the latest information on the scientific consensus around climate change.

At the first Climate Conversations meeting, Brecha summarized the latest report from the United Nations’ Intergovernmental Panel on Climate Change, which for a group that relies on scientific consensus is exceedingly clear in its report that the climate is warming and humans are the dominant cause.

However, Brecha said he believes that the technology is there to transition from fossil fuels and that the cost to avert climate change would only be 0.1 percent of global gross domestic product per year.

“This shouldn’t be an economic issue. We can do it with little pain,” Brecha said, adding: “It’s not a technological challenge, it’s a people challenge.”

At future Climate Conversations, Community Solutions hopes to explore the idea of a Climate Action Plan for Yellow Springs, a model for reducing greenhouse gases implemented in other communities.

“We would be looking at the main emissions generators in town — at our housing, food, transportation and waste — and ways we can work together as a community and as individuals to reduce that,” Jennings explained. She added the group has discussed inviting organizers from Oberlin, which committed in 2007 to reduce its greenhouse gas emissions by 50 percent by 2016, 75 percent by 2035 and to zero by 2050.

The Village of Yellow Springs has taken significant steps to reduce its carbon footprint in recent years. At the Climate Conversations meeting, Energy Board Chair Jerry Papania reported on the municipality’s progress, which has included streetlight replacements, Bryan Community Center lighting upgrades, library energy-efficiency renovations, the passing of a net metering ordinance and the signing of power contracts for solar, wind and hydroelectric power. By 2016, 85 percent of Yellow Springs’ electricity portfolio will be renewable energy, Papania said.
However, Morgan explained that there is more for the Village to do. Even though Yellow Springs pays its municipal energy provider American Municipal Power more to invest in renewable energy, most of the actual electricity that powers local homes and businesses is coming from coal-fired electricity nearby, she said.

“It’s very noble we’re supporting AMP in getting renewables but most of our electricity is coal,” Morgan said. “That’s one reason for Antioch [College] having photovoltaics so close. When you have it right there it goes to the closest place. We really want to have the renewable energy here.”

For more information or to register, visit http://www.communitysolution.org.