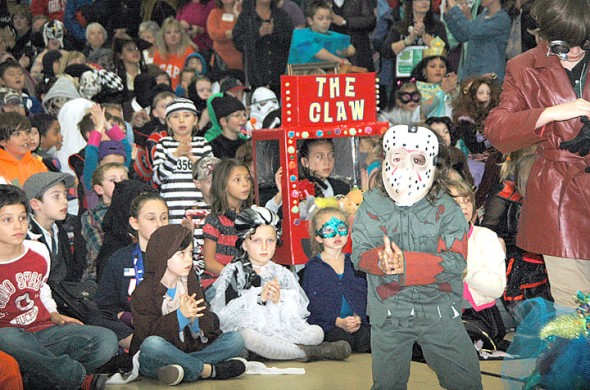 Mills Lawn School came alive with stuff of dreams and nightmares Friday, Oct. 31 at the annual Halloween Parade. The parade was held indoors because of inclement weather. (Photos by Matt Minde)

Rain on the parade

The seasonally decorated students (and teachers) of Mills Lawn School had to make do with holding the annual Halloween Parade indoors Friday, Oct. 31, as the outside was chilly and might have dissolved many a mask.

There was the usual parade of costumes across the stage, with older students leading their often slightly hesitant younger “buddies.”

Teachers and other MLS staff showed off their own hidden selves, as faeries, dominoes, rock-paper-scissors, and — to some, the most horrifying — Principal Houshes.

The 5th- and 6th-grade choir performed a few spooky songs, including a complicated 5-part rendition of “Ghost of John.” The final musical offering was a calesthetic version of Edvard Grieg’s “In the Hall of the Mountain King”, which starts off slow and works to a feverish frenzy, just enough to burn off all those sweets-to-come.

Students filed back into their classrooms to partake of movies or games, discussions about that evening’s trick-or-treating, and of course, delicious snacks.

View photos from the event below.