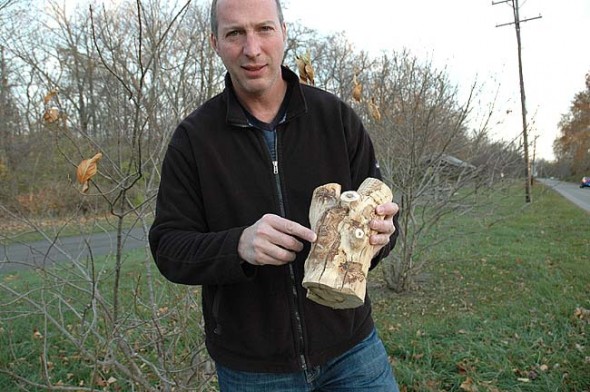 Wright State University Biology Professor Dr. Don Cipollini pointed out his groundbreaking discovery that the white fringe tree can be a host for the emerald ash borer. Cipollini was the first to publish research and convince the U.S. EPA to confirm the white fringe tree as the only other known host for the invasive beetle. Trees planted along the bike path and elsewhere in the village were instrumental to his discovery. (Photo by Megan Bachman)

A local white fringe tree planted along the bike path is now famous as the first documented non-ash tree host of an invasive beetle that was thought to only prey upon ashes.

Also famous is the local ecologist who made the discovery thanks to perseverance — and a little luck.

After scouring the village, Wright State University biology professor Don Cipollini, who lives in town, first saw the telltale signs of an emerald ash borer infestation in a white fringe tree planted along the bike path on Corry Street this summer.

Last month Cipollini’s lucky discovery of a dead adult male beetle in a log of the same tree led the U.S. Department of Agriculture to officially confirm the white fringe tree as a host. Previously, it was thought that the emerald ash borer could only reproduce in — and kill — ash trees.

“Who would have thought that what’s off of the bike trail in Yellow Springs could change possibly federal policy?” Cipollini said in a recent interview.

Cipollini’s revelation, soon to be published in the Journal of Economic Entomology, has alarmed everyone from nursery owners to entomologists to policymakers. Not only might the white fringe tree be driven to extinction in Ohio where the native species is already threatened, but the spread of the emerald ash borer into warmer southern climes, where white fringe trees are more common in the wild, means the invasive beetle will bring even more devastation as it marches south.

The implications of Cipollini’s discovery are profound. The white fringe tree, which grows wild along the Ohio River and is becoming a popular ornamental elsewhere in Ohio, may soon become quarantined by the federal government, effectively removing it from the nursery trade. His finding also opens the door to the potential that other species related to the ash, such as wild and cultivated olive trees, may be under threat from the emerald ash borer.

While some scientists are holding out hope that Cipollini’s findings are an anomaly (even though he has found evidence of white fringe tree infestation elsewhere in the Dayton and Cincinnati area), most are responding with a mixture of fear and dread.

Native to Asia, the emerald ash borer was unknown in this country until 2002, when it was discovered killing trees in southeastern Michigan and Windsor, Ontario.

Since 2003, the borer has made its way through Ohio, which was home to 3.8 billion ash trees, according to the Ohio Department of Natural Resources. Cipollini first saw evidence of emerald ash borer in Yellow Springs in 2012. Within a few years, many of local untreated green and white ash trees in the path of the voracious bug have succumbed.

The white fringe tree is a shrub or small tree with fragrant white, thread-like flowers and olive-like fruit native to the Eastern U.S. Since the white fringe tree is a close relative of the ash, Cipollini became curious about its potential as a host this summer. Earlier studies done a decade ago did show that the emerald ash borer nibbled on the plant’s leaves, but did not determine whether or not the tree could be a host. Since then there have been no studies published in the scientific literature that looked more closely at the ash relative.

Hot on the trail of the emerald ash borer in August, Cipollini had the local police called on him twice — once for climbing under a white fringe tree along the bike path to get a closer look and again when he was cutting down a 15-foot-tall white fringe tree in the same area with the permission of the Yellow Springs Tree Committee, which had planted it.

It was that tree, which would have likely died in the next few years due to its emerald ash borer infestation, that yielded larvae and an adult specimen that convinced the USDA’s Animal and Plant Health Inspection Service that Cipollini was right about the white fringe tree as a host for the emerald ash borer.

Cipollini first checked the white fringe tree in his backyard and later tracked down trees at the Lloyd Kennedy Arboretum at Ellis Pond, and on the Antioch College campus. He found evidence of the emerald ash borer while inspecting eight trees that had been planted along the bike path by the Yellow Springs Tree Committee.

“The fourth tree I looked at, there was the characteristic [emerald ash borer] exit hole three-feet off the ground,” Cipollini said. “I was facing directly at it. I couldn’t believe it.”

After felling the tree and cutting into the log, Cipollini noticed “galleries” where emerald ash borer larvae had fed dating back at least two years to the arrival of the bug in Yellow Springs. He also found about eight live larvae actively feeding on the tree. While he identified the larvae as emerald ash borer, the federal government wasn’t convinced — they needed an adult specimen to be sure.

In the meantime, Cipollini found infested trees at a High Street residence, Cox Arboretum in Dayton, and Ferncliff Cemetery in Springfield. Then some six weeks after he chopped the bike path tree down, Cipollini took another look. The log had since dried and cracked. From one split in the log, a gleam of light hit his eye.

“I see a little gleam of light, which is the light reflecting off of the emerald sheen of the emerald ash borer,” Cipollini said. “It was a two-year old beetle preserved in the wood.”

USDA entomologists in Michigan and Washington D.C. studied the specimen before agreeing that it was emerald ash borer, thus confirming a new host record for the insect, only the second documented host in either North America or China.

Cipollini’s findings represent a “major new direction” for his work, which has focused heavily on the ash borer in recent years. Pending funding, he will look at the extent of the risk that emerald ash borer poses to planted and wild white fringetrees, as well as treatment protocols to save white fringe trees from infestation. Because the tree’s flowers attract pollinators, systemic pesticides, which are used to treat ash trees, wouldn’t be prudent. Instead there may be bark sprays that don’t have fewer “non-target” effects. He also hopes to study other ash relatives that may also be vulnerable.

Cipollini, who moved to the village in 2000, is a Ph.D. biology professor at Wright State and the director of its Environmental Sciences Ph.D. program. He lives in town his wife and children Emmett and Otto.