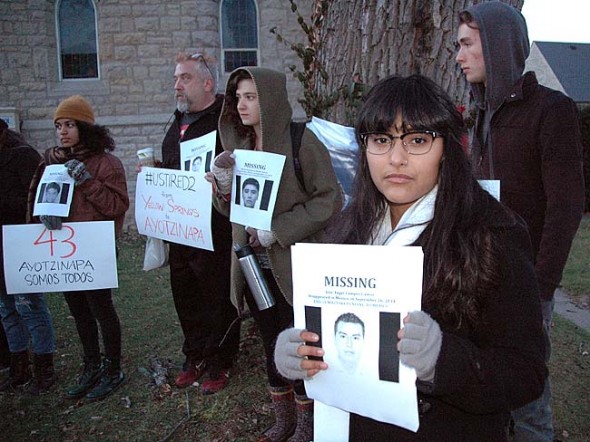 Odette Chavez-Mayo, in foreground, organized a candlelight vigil Friday, Dec. 3, after she found out about the murders of 43 Mexican students who were headed to a protest. She points out the similarity between police brutality in Mexico and the shooting of an unarmed African-American youth in Ferguson, and notes the need to "stick together." (Photos by Matt Minde)

Last Friday, Dec. 3, several Antioch College students, faculty and townspeople participated in a candlelight vigil on Xenia Avenue, in a display of solidarity with Mexico for the disappearance and subsequent murder of 43 students on their way to protest discriminatory hiring and funding practices by the government. The students had been arrested by police and, allegedly upon approval by the region’s mayor, turned over to a drug cartel for disposal.

Antioch student Odette Chavez-Mayo organized the event after she found out about the murders. “I felt extremely frustrated…like there was nothing I could do to help,” she wrote in an email.

“Although this wasn’t the first time that people in Mexico have gone missing (over 25,000 in the past 8 years and 100,000 murdered) it definitely caused an uproar and now people are out on the streets demanding justice.”

Chavez-Mayo wrote that she “reached out to #UStired2, an organization in the United States that was planning demonstrations all over the country… to spread awareness on the issues and to demand the U.S. government immediately stop the Merida Initiative,” a security cooperation agreement between the United States and Mexico, with the declared aim of combating the threats of drug trafficking, transnational organized crime and money laundering. Critics point out that the efficacy of the program is often thwarted because of corrupt government officials, police and military.

“My purpose was to bring awareness on the injustices happening in Mexico, the extreme corruption of the government, and the police brutality,” Chavez-Mayo writes, “all of which, I think is not that different from everything that’s been happening in Ferguson lately, so I think it’s extremely important to stick together.”

The protesters handed out flyers, each with a picture of one of the 43 murdered students. They also placed 43 candles at the foot of a large tree, which were left to burn as the vigil waned and dusk descended, making the flames increasingly prominent.