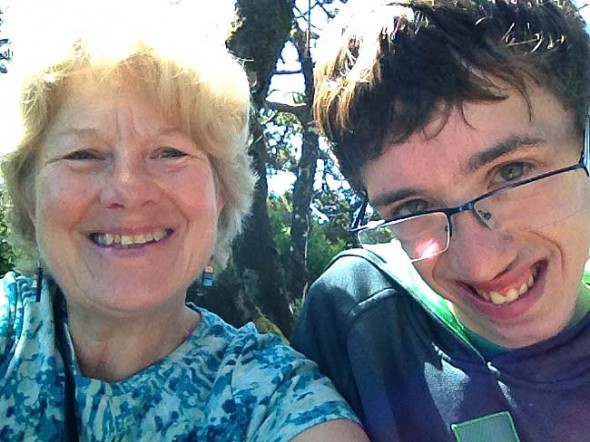 Yellow Springs resident Debra Williamson, here with her son Alex Oliver, is organizing a conference on the issues facing those with mental and physical disabilities. “Valuing Diversity: A Day of Disability Awareness and Education” is Friday, Dec. 5, at Antioch University Midwest. (Submitted photo)

Conference at AUMidwest— A day of disability awareness

Dara Cosby doesn’t want a life that revolves around her disability.

But the 33-year-old Centerville woman with cerebral palsy encounters a new challenge every day, whether it’s pulling herself out of bed, maneuvering around an unreliable public transportation system or navigating the dating scene.

The problem is that Cosby, who is in a wheelchair, is not only limited by the availability of ramps, automatic doors and accessible bathrooms. She is also limited by the prejudices of a society that assumes what she can and cannot do — a form of discrimination called “ableism.”

“With ableism you are downgrading someone because of their differences,” Cosby said. “People make assumptions about what you can and cannot do.”

Cosby will speak next week along with 13 others at a local conference on disability organized by Yellow Springs residents Debra Williamson and Adriane Miller and sponsored by the Yellow Springs Human Relations Commission, Antioch University Midwest and the National Conference for Community and Justice of Greater Dayton, or NCCJ.

“Valuing Diversity: A Day of Disability Awareness and Education” is 9 a.m. to 4 p.m. Friday, Dec. 5, at Antioch University Midwest, 900 Dayton St. Aimed at social workers, educators, parents, caregivers, counselors and others, the conference is an effort to raise awareness of issues faced by the disabled and open dialogue about the discrimination they face, according to Williamson.

“It’s not just prejudice — it’s something that limits someone’s access based upon stereotype or physical appearance,” said Williamson, whose 16-year-old son, Alex, a Yellow Springs High School student, has physical and cognitive impairments.

Topics at the conference include parenting strategies, addressing “invisible” mental and physical impairments, disability in education and community activism.

Crosby, also a licensed counselor, will speak on the difficulties of dating in a wheelchair in a talk on “sexuality and disability.” Williamson will help parents understand IEPs, 504 plans and other aspects of special education in schools. The keynote speaker, Dr. Julie Williams, of Wright State University’s School of Professional Psychology, who is a dwarf, will talk on abuse in the community of people with disabilities. Barb Greiwe of Yellow Springs Schools will focus on conflict resolution. Other speakers will address mental disability and resilience, fathering children with special needs, autism in higher education and more.

According to Miller, a co-organizer who works for NCCJ, ableism is one “ism” that needs more attention.

“We think about racism, sexism and classism but really there are so many more,” Miller said. “There is so much privilege we have as able-bodied people.”

For example, able-bodied people enjoy basic privileges like talking on the phone or going to the bathroom by themselves in a public place that those with disabilities sometimes do not, Miller said. In addition to a lack of independence, the disabled also often face difficulties in finding and keeping jobs, accessing healthcare and dating, to name a few.

According to 2010 U.S. Census figures, nearly one in five Americans — more than 56 million people — live with a disability. Since about half of all disabilities are age-related, the number is expected to grow, Williamson commented. And while some disabilities are visible; others are not.

As a result, Miller said it’s important that people not judge and instead work to support and include those with disabilities as much as possible.

“If you see someone park in a handicapped spot and they don’t look handicapped, don’t judge,” Miller said. “Take time to get to know people. You never know what someone has gone through before they’ve gone through the door.”

Rather than just accepting those with a disability, people should aim for inclusion as much as possible, Miller added, citing a quote about the difference between diversity and inclusion. “Diversity is being invited to the party; inclusion is being asked to dance,” she said.

Miller and Williamson both said that Yellow Springs has a long ways to go to make the town accessible and inclusive for those with a disability. Miller cited the lack of sidewalks throughout the village and the many downtown businesses that are inaccessible to those in a wheelchair.

Williamson added that even though Yellow Springs claims to celebrate diversity, cultural biases affect how people here view the disabled.

“It’s been eye opening to me how people even in this small village are not aware of how what is said impacts others,” Williamson said. “People who are in positions of power have limited perceptions, and until they examine those and change those we have a lot of work to do.”

Cosby said that continually calling attention to disability issues is important because most people don’t think about it on a day-to-day basis unless they or someone they know are affected. She urged people to be thoughtful about how they use language, not make assumptions about others and treat everyone, including the disabled, with respect. Even when people have good intentions, they can still offend.

“Most people are generally lovely but there are individuals who talk to you like you were a small child and make assumptions you are slow,” Cosby said. “And you don’t get invited to certain things because people make assumptions about what you can and cannot do. Sometimes people have the best intentions, but it doesn’t necessarily feel that way.”