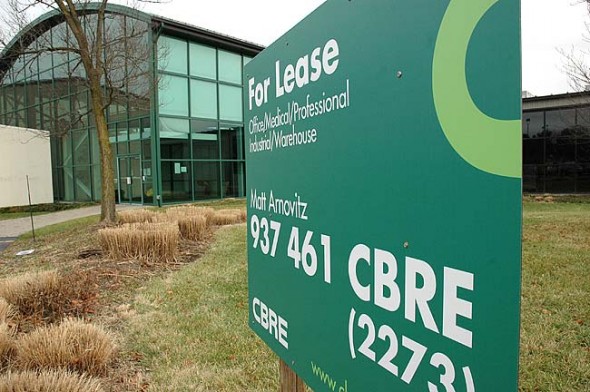 Community Physicians of Yellow Springs will move into a 6,000-square-foot space at 888 Dayton Street, the former Creative Memories building, where it hopes to expand its services as a rural health center. Most of the 90,000-square-foot facility is still available. (Photo by Megan Bachman)

Community Physicians of Yellow Springs will move across town and double in size next year.

The local primary care practice is relocating to 888 Dayton St., the former Creative Memories building, where it hopes to expand its services as a rural health clinic.

The new 6,000-square-foot office will feature 12 exam rooms, a nurses’ station, a waiting room, a laboratory and a separate building entrance and should be complete by summer 2015, according to building architect and construction manager Ted Donnell.

By relocating into a new and bigger space, Community Physicians can accommodate the growing demand for its services and can meet the higher standards of the federal rural health clinic designation, according to Mark Floro, director of clinical service for Greene Memorial Hospital and Soin Medical Center.

Rural health clinics increase rural Medicare and Medicaid patients’ access to primary care by relying on nurse practitioners and physician’s assistants and offering the services of visiting specialists such as neurologists, cardiologists and obstetricians, according to Floro. There are fewer than 30 rural health centers in Ohio.

The Kettering Health Network is interested in establishing rural health clinics in Cedarville and Yellow Springs to improve the quality of life there with more comprehensive healthcare, Floro said.

“There is no reason that patients should have to leave their community for basic healthcare needs and if we can do that, we will,” he said. Rural health clinics also receive special Medicare and Medicaid reimbursements, which are important since primary care practices don’t make much money, Floro added.

Community Physicians currently receives 8,000 visits per year, a number that is expected to grow even though the clinic hopes to minimize return visits through preventive care, Floro said. Part of that growth is due to the increase in those covered by insurance through the Affordable Care Act, the related expansion of Medicaid in Ohio and an aging population.

In addition to cosmetic upgrades, the existing Xenia Avenue building would need extensive renovation to meet the more strict safety and sanitary requirements of a rural health clinic, Floro explained. And with only seven exam rooms it could not meet increased demand.

The Xenia Avenue building is owned by Dr. David Hyde and Dr. Paul Van Ausdal, who retired from the practice last year. The 0.72 acre commercial property is for sale and listed at $375,000. Hyde’s father, retired physician Dr. Carl Hyde, along with Dr. Harry Berley, now deceased, opened Community Physicians at that location in 1956.

Kettering Health Network will recruit  specialists to rotate through the practice, Floro said, while Community Physicians office manager  Carol Morris said the practice is likely to hire at least one more support staff.

Community Physicians, now the largest committed tenant in the 90,000-square-foot facility at its new Dayton Street site, will anchor an area of the building being renovated for medical and wellness use, according to commercial realtor Matt Arnovitz. In that section, physician Dr. Donald Gronbeck currently leases about 2,000 square feet of space for his private practice, Yellow Springs Primary Care (while also accommodating a shiatsu masseuse). In addition, there has been demand for the space from massage therapists, physical therapists and clinical psychologists, Arnovitz said. There are also tentative plans for a multi-purpose room that could be used for yoga, aerobics, dance or meetings, he added.

The move of Community Physicians into the building will not require Village approval since the 10 acres of the Dayton Street property located in the Village were rezoned last April from I-2 Industrial to Planned Unit Development to accommodate mixed use at the site. Under its new zoning, professional offices and medical offices are permitted without requiring additional Village approval, while any light industrial use would have to be approved, according to Donnell.

The property was purchased last year by Yellow Springs LLC, a group of investors located in California and around the country. Other tenants sharing building space with Community Physicians are e-Health Data Solutions, which recently expanded its footprint to take up around 5,000 square feet, and Brick Forge, a customized minifigure accessories company formerly located at Blokhedz novelty building toy store downtown.

Arnovitz said other businesses have expressed interest in moving into the building, including a video production company and a small tool and die shop.

“It is a good building, it is in a very good location, it has ample parking and it lends itself well to doing the ‘flex’ space because there are different ceiling heights and entrance points,” Arnovitz said. “There are very few buildings like it in the area.”

The building has been slowly filling up since e-Health Data Solutions first moved in in 2011, followed by Antioch University in 2012. (Creative Memories closed in 2012). According to Arnovitz, “activity breeds activity” which explains the recent flood of interest. However, the process of securing tenants seems to move more slowly in Yellow Springs than elsewhere in the Dayton region.

“The Yellow Springs market is a little bit unique in that there tends to be a lot of interest but it’s a slower process than in other places,” Arnovitz said. “People are a little more cautious.”