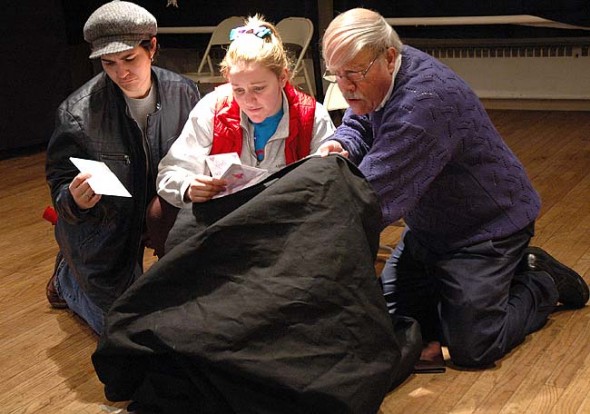 For the fifth consecutive year, the Ten Minute Play Festival that revived community theater in Yellow Springs is back. The Yellow Springs Theater Company is producing a range of comedies, dramas and experimental pieces about sharp-toothed animals, the talking dead, burglars with a conscience and growing old in a small town, with all local or locally associated playwrights, directors, actors and producers. The event, featuring six plays, will start the second half of the YSTC’s season that opened last fall with “D’Arc Comedy” and “Killers” and will finish this spring with “Godspell” and “Inherit the Wind.”

This year’s Ten Minute Festival will be performed at the Presbyterian Church, the troupe’s original home, on Friday and Saturday, Jan. 30 and 31, at 7:30 p.m.
Kay Reimers and Virgil Hervey started the Ten Minute plays in 2011 under Reimers’ newly invigorated Center Stage Theater (a 30-year community theater that closed in 2003). The theater troupe opened with “The Cherry Orchard” and produced half a dozen plays over its four years, bringing many local actors and directors back to the stage after an eight-year pause in local productions. When Reimers announced last month that the Center Stage group would rest and hand the Ten Minute Festival to the YSTC, Lorrie Sparrow, artistic director for the YSTC, was very grateful.

“I told them we’d love to continue the tradition because it’s such a cool thing,” Sparrow said this week. “I give Kay and Virgil a lot of props for the Ten Minute Play Festival and the subsequent Center Stage Theater productions — I couldn’t be more honored to have been part of that group.”

According to event co-coordinator Miriam Eckenrode-Saari, the lineup includes two pieces written by local playwright Lee Huntington. “Ever After” is set in a crypt and was staged last year by the Human Race Theater Company and edited for its debut at the festival. Huntington will direct her other play, “Who Done It,” a dark comedy about a couple (played by Ten Minute veteran actors, Jerry and Kathy Buck) and a mystery novel.

Wanda Strukus wrote “Leopard, Tiger, Bride and Groom,” a play about nature and its consequences, as a wedding gift to Sparrow. Strukus, who directs the Contemporary Theater program at Boston Conservatory, has collaborated with both Center Stage and the YSTC since 2011 and wrote last summer’s production “D’Arc Comedy” about Joan of Arc.

“She enjoys being part of this hive, and we enjoy her,” Sparrow said of her distant colleague.

Local writer and former Mad River Theater Director Holly Hudson authored one of this year’s dramas about an intimate relationship. And Harold Wright, a local writer and Japanese poetry scholar, wrote “Persimmon Tree” about a day in the life of an elderly Yellow Springs couple.

“In all the Ten Minute Festivals there’s typically one play that’s very, very Yellow Springs with lots of familiar references to local people and places — this year, this is the one,” Eckenrode said.

YSTC is made up of about 20 semi-professional actors and directors, many of whom started out with the Center Stage group. But while Center Stage was a community theater that welcomed those without any previous experience, some members saw the potential to develop a more professional company.

“I like the way Lorrie puts it: We’re not a community theater, we’re a theater for the community,” Eckenrode said.

According to Sparrow, Yellow Springs has a tradition of high level theater that goes back to the 1950s Shakespeare Under the Stars summer series that brought professional actors to perform at Antioch College.

“Our goal is to be able to offer our artists subsidies, like the Arthur Lithgow model,” she said, referring to one of the more famous Shakespeare series’ founders.
To that end, the YSTC also hopes to make some significant growth in the next year as it starts to consider a new home, Sparrow said. The Presbyterian Church has been a gracious host to the company, housing both its rehearsals and productions, as well as providing some storage space over the years. But the company would eventually like one place to store its costumes and props, which are now scattered among the basements of a few members, and have a dedicated rehearsal space for each production.

For any theater group, the value of the Ten Minute plays can’t be underestimated, Sparrow said.

“This is about the experience of hearing a play being performed for the very first time,” she said.

“What I love about the Ten Minute plays is they’re closely connected to the community theater model,” she said. “It’s a nice bridge between the two companies.”