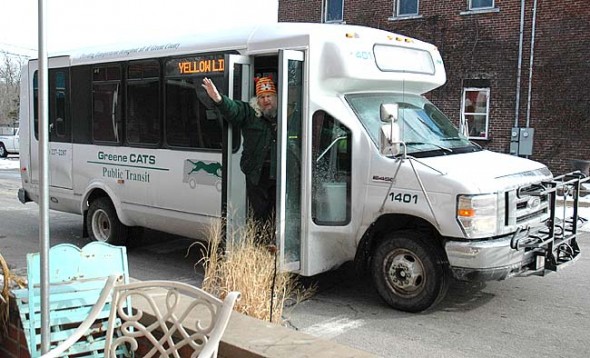 Local resident Gene Lohman is one of about 65 Yellow Springs residents who ride the public bus that comes through the village about every 45 minutes during the weekdays. Anyone interested in a bus route tutorial and free trial ride is invited to sign up now for an event scheduled the week of April 13. The rides are sponsored by the local Climate Change group. (Photo by Lauren Heaton)

Riders welcome on the public bus

Village resident Gene Lohman loves the “flex” bus — Greene County’s public transit system. When he wants to get anywhere, be it the Highlander Laundromat downtown, the Greene County recycling center in Xenia, or the Greene Town Center in Beavercreek, he simply puts himself at a place along the bus route where the driver will see him and hails a ride. As a senior, the trip costs him $.75, half the regular fee of $1.50. Transfers are free.

Villager Brian Housh also likes the flex bus. Living in Bangkok, Thailand, New Orleans and Chicago before coming to Yellow Springs three years ago, he got used to public transit. And he was thrilled to find in Greene County, Ohio, a public bus to get him to meetings in Dayton, doctors’ appointments in Xenia and other places he can’t easily bike to.

Elaine Brown also rides the flex bus to get to doctor’s appointments and other places she can no longer drive to with her sight and hearing disabilities. She catches it on Dayton Street and finds it a useful and friendly service.

The flex bus is the short, fat, white shuttle bus that scoots through the village about every hour with a digital display of its route overhead. The vehicle looks like a private bus because it’s handicapped accessible. But it’s public transport available to any resident 14 and over (those 13 and under must be accompanied by an adult) weekdays, 6 a.m. to 6 p.m.

Operated by Greene CATS Public Transit, the flex bus is so named because the stops are flexible. Instead of physical bus stops, the drivers will stop anywhere along their daily routes to pick up passengers who flag them down. The routes go from Xenia to Fairborn to Beavercreek, with connector lines to the Dayton RTA. And the buses can also deviate up to three quarters of a mile off route for a pick-up or drop off, though deviations must be arranged by calling the scheduling office two days in advance.

In 2014 an average of 63 riders per day used the flex bus from Yellow Springs. But a transportation committee from the recent Climate Change Conference in Yellow Springs believes that public transportation is a key energy saving tool, and that if more people knew how to use the flex bus, more would ride it. So during the week of April 13, a week before Earth Day, the group will sponsor a Ride the Bus education initiative when villagers can learn about the routes and go on a free trial ride on one of its routes from Yellow Springs.

Greene CATS mobility manager Shannon Webster will give three presentations that week, each followed by a bus ride. On Monday, April 13, Webster will address transportationally disadvantaged riders, including low-income and disabled riders, beginning at the Senior Center at 3 p.m. At 4:06 those who are interested can flag down the bus for a trial ride to Xenia and back. On Tuesday, April 14, at 2:30 p.m. Webster will talk about student mobility at the McGregor lecture hall at Antioch College, followed by a trial ride to Fairborn with a route deviation and a transfer to the Beavercreek RTA line. On Thursday, April 16, Webster will talk at the Yellow Springs Library at 11 a.m., after which riders can choose their own trial route. The trial rides are limited to 10 people per route, and participants are encouraged to sign up now at the location of the talk associated with the route they want to try.

The Climate Change group hopes the events will give local residents “one option to leave your car at home,” according to Dimi Reber, who organized the transportation week with Käthi Seidl.

The bus routes are easy to use once you start riding them, according to both Lohman and Housh. There is one line out of Yellow Springs that goes to either Xenia or Fairborn, where riders can catch other lines to get around Xenia, Beavercreek, Fairborn and connect to the Dayton bus. Rides cost $1.50, with free transfers within the county.

Housh uses the bus for fun outings, such as taking his two young nephews, Tyler and Kenji, out to lunch in Dayton with his aunt. And he found his favorite Thai restaurant in the region, Thai Kitchen, just riding the bus through Beavercreek one day. He has also met some very nice people around the county on the bus as well.

“More than half the time I get pulled into conversation, such as one guy who learned I was a Village Council member and said to me, ‘Wow, I can’t believe that a Council person would be riding the bus!”

There are also drawbacks, Lohman admits, to the bus system. Riders have to be on their toes to be able to catch the ride they need, and the bus does not operate at night or on weekends. And the bus is rather slow. It can take a full six hours to ride the bus to Dayton, attend to business and then get back, according to Housh, who often plans to check his email or read Council packets in transit.

For health and cost reasons, Lohman, who is 68, does not own a car. That used to be a hassle for him. But since Greene CATS decided to bring their flex routes through Yellow Springs several years ago, he can now be more mobile and independent.

“I ride the bus almost every day to downtown — I catch it right outside my house on Woodrow and it drops me off at the Spirited Goat,” he said. “But you have to be on your toes to catch it when it comes around again about an hour and a half later.”

Lohman would like others to know how convenient the bus can be, and how fitting it is for a town whose residents are socially and environmentally conscious.

“I try to encourage people to ride the bus here in town because we’re always talking about being green. What better way is there to be green? … You can tell ’em, Clean Gene says go green!” Lohman said, using his DJ moniker.