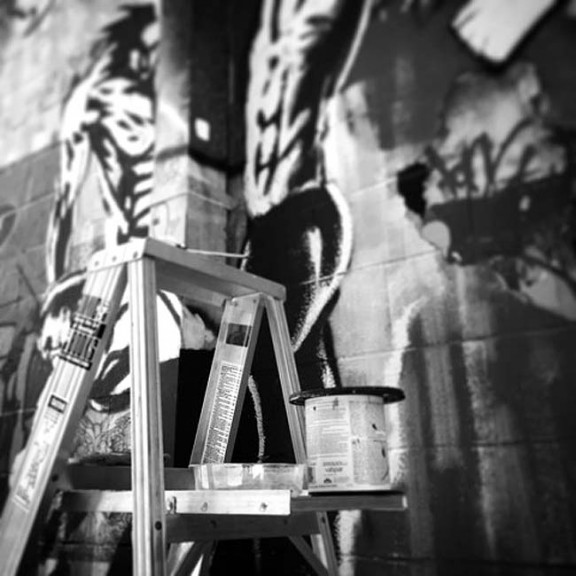 A photo by Amy Hable of the tools of mural making in Kieth’s Alley, shown above, is one of many local images on display beginning Friday, March 20, at the #ysgram exhibit at the YSAC Gallery on Corry Street. The exhibit, which contains photos of local scenes by seven village photographers originally shown on Instagram, opens with a reception from 6 to 9 p.m. this Friday. (Instagram photo by Amy Hable)

#ysgram show focuses on the local

Organizers of the #ysgram, the new show at the Yellow Springs Arts Council Gallery, want to offer villagers an opportunity to see familiar local sights in new ways.

“I hope this helps people think about how to look at ordinary things anew,” said Corrine Bayraktaroglu, one of the photographers whose work is on exhibit.

The exhibit of seven local artists’ photographs of Yellow Springs opens this Friday, March 20, with a reception from 6 to 9 p.m. at the Corry Street gallery. The show runs through April 12, with gallery open hours Wednesdays through Sundays from 1 to 4 p.m.

The photos on display were originally posted on the Instagram page #ysgram over the course of the last several months. The page offers a place for villagers to display photos that show an insider’s view of Yellow Springs, according to Hable.

“The hashtags created in Instagram are little communities in some ways and photographers tag their shots based on what community you want to have them viewed by,” she wrote in an email. “Since Yellow Springs is such a tourist town, all the hashtags for the village mainly consisted of pictures by tourists … I created the hashtag #ysgram for those of us that live here, work here and see all the amazing things that tourists may not be looking for.”

The photos on display include sights many of us see on a regular basis, but which we may not have seen in the photographers’ singular way. For instance, Hable’s photos include views of washing machines from the Highlander Laundromat, a dramatic sky at dusk over a Whitehall Farm field and a ladder and paint can next to the Kieth’s Alley murals; Sharp’s include a view of Bayraktaroglu at the old Bryan Center amphitheater and an open door at a dilapidated building on the Antioch campus; and Bayraktaroglu’s include black and white images of a rural scene off Polecat Road and clouds reflected in an old barn’s window. Most of Green’s photos are of the natural world, and include the sun setting over the Pitstick Farm on Enon Road.

Mainly, Green said, she finds inspiration in the Glen. As a child, she grew up on Cemetery Street near the Glen and often spent long periods wandering in its natural beauty.

“It’s my grounding point,” she said of the Glen. “It cheers me up.”

While the photos can be seen online at ysarts.blogspot.com/2015/03/ysgram, there is something special about seeing them in the gallery, organizers believe, where each artist is represented by nine photos of 8” x 8”.

“A photo looks different in real life compared to online,” Sharp said. “There’s something totally different about standing in front of a photo.”

Seeing nine examples of each artist’s work offers a comprehensive look at the photographers’ sensibility, and the spaces between photos help to give each one emphasis, organizers said. All of the photos on exhibit will be on sale for $45.

The spark for the #ysgram show came about a year ago when Bayraktaroglu’s husband gave her an iPhone and “I went bonkers,” she said. Specifically, she was amazed at how well the phones took pictures, and how she could use special apps or Instagram filters to manipulate the photo’s mood or effects.

“What people once did in a dark room, they now do on an iPhone,” she said. “And in about a minute.”

Her newfound facility with a camera inspired Bayraktaroglu to take more photos of her village, and she began posting them on Instagram, the online platform for photos. Others were doing the same thing, until the idea to congregate photos from village locals emerged in the hashtag #ysgram.

While many in the #ysgram show are artists in a variety of media — Bayraktaroglu paints and embroiders, Sharp also paints, and Green creates jewelry and stained glass — they find that photography affects their art, and their lives, in a multitude of positive ways. Photos can serve as inspiration for other works of art, according to Bayraktaroglu, and perhaps most importantly, it helps her to live in a different way.

“It makes me more observant,” she said. “It gets me out of the studio and watching the world around me.”