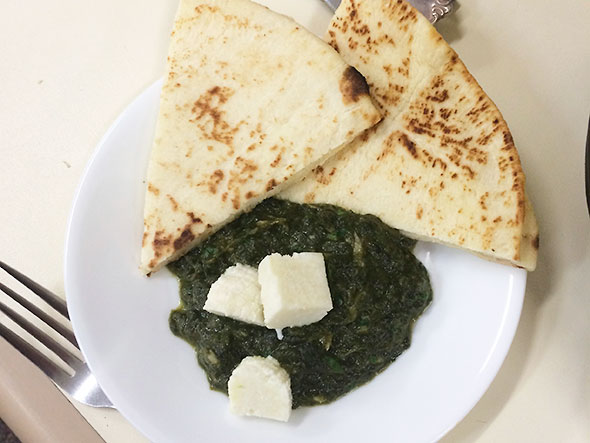 I woke to an unexpected text. “Good morning! Question—do you have an immersion blender by chance?” I don’t actually. When it comes to food processing, I’m old school relying on the stone mortar and pestle more often than the plastic-wrapped cuisinart. Jeremy brought his mom’s hand mixer into our marriage, and Rita’s 5-speed blender works like a charm. Still I tend to rely on self-propelled tools—wood spoons and wire whisks—to whip and mix my concoctions. 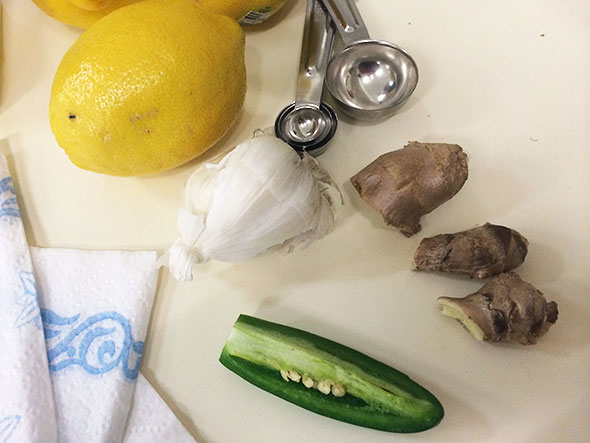 Chef Corey Elbin was gearing up for his afternoon cooking class—“Saag Paneer”, he tells me—and had left his immersion blender on the west side of Dayton. We ticked off a couple potential local sources and promised to meet each other later that morning at the Yellow Springs Senior Center for the class. By 11am, I was on my way to pick up a blender from a friend when Corey texted back his own success, quickly followed by a request, “Grab some naan??” I parked out side the senior center, scooted over to Tom’s Market, and picked up couple packages of the flat bread from Aisle 5. 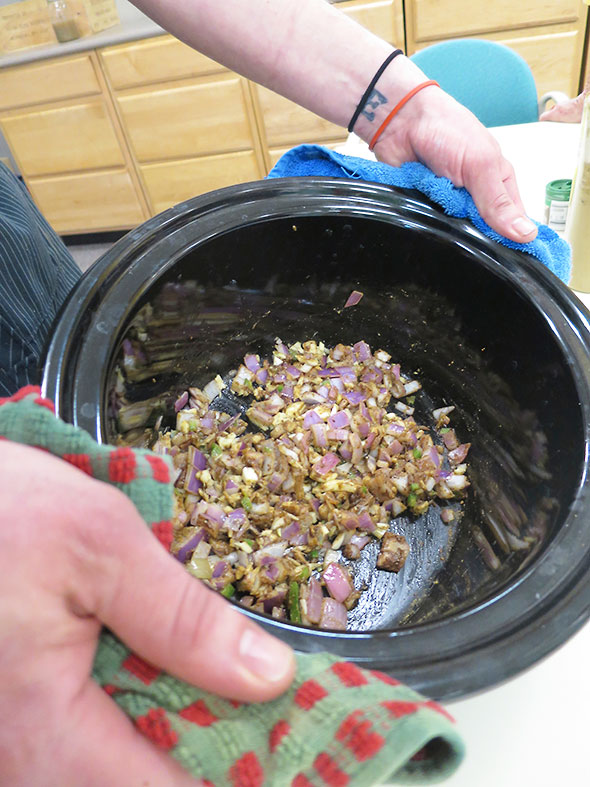 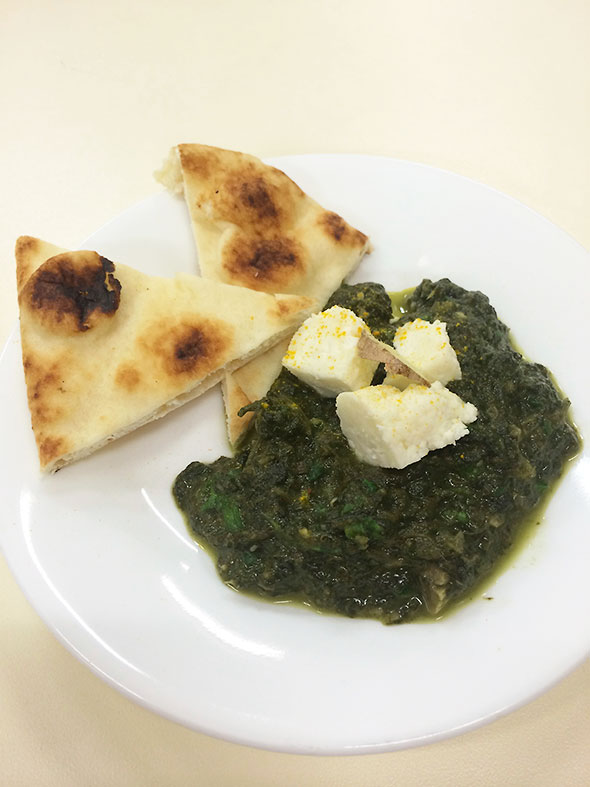 Back at the senior center, Corey was leading a group of ten students through the process of making the two separate parts of the dish, the saag and the paneer. The saag—an aromatic purée of wilted spinach and yogurt—is slow cooked in a crockpot. The paneer is a simple cheese set using the juice of a lemon and served fresh. Both parts take a stretch of time to complete: the saag about 3.5 hours before eating and the paneer about 45 minutes.

Before the class began, Corey set eight cups of milk in a pot on the stove to bring it to a slow boil. Turning the heat down to low, He fresh squeezed the juice of a lemon—enough to make 1/4 cup—then added the juice to the boiling milk. The acid in the lemon juice cause curds to separate themselves from the whey of the milk. Giving the milk a gentle stir, he turned next to preparing the saag.

Because the saag slow cooks, Corey had brought two crockpots: one to demonstration the start of the process, one nearing the end of the preparation. Corey set the empty crockpot on high, melted 4 tablespoons of butter, and added small chopped pieces of six garlic cloves, one red onion, two serrano peppers, and three tablespoons of minced ginger. He seasoned the aromatics with a spice mixture of garam masala, coriander, cumin, and turmeric—one tablespoon each—a dash of cayenne pepper, and a teaspoon of salt. In an hour, he would add 30 ounces of spinach and turn the crockpot to low. In two hours, he’d add a bag of fresh baby spinach until it wilted. Here, Corey turned to his second crockpot which was three hours into its cooking process and demonstrated pureeing the seasoned spinach with 2 tablespoons of butter and a half cup of greek yogurt. The immersion blender that Corey borrowed from the Emporium allowed him to puree the saag without removing it from the crockpot. 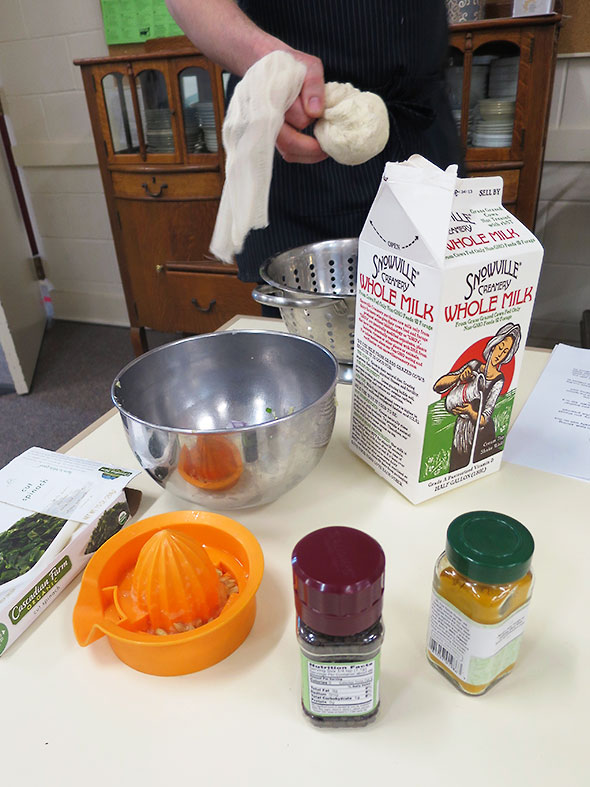 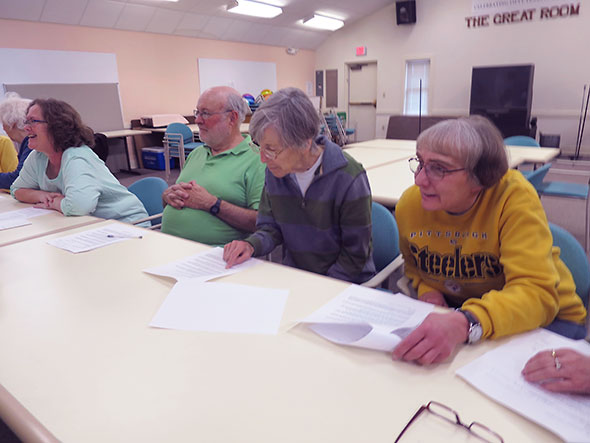 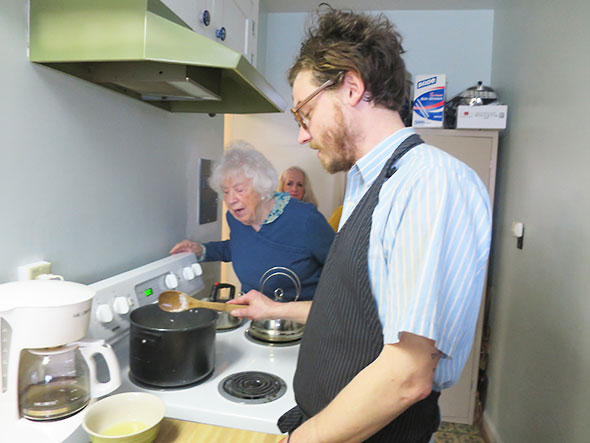 When he got the saag to a creamy but still textured consistency, he returned to making the paneer and strained out the curds by pouring the whey through a cheesecloth covered straining. He tied the ends of the cheesecloth together and squeezed to remove more whey until the curds reached a feta like consistency. He then flattened the cheese and covered it with a stack of plates, again to encourage more of the whey out and to press the cheese into a uniform thickness. 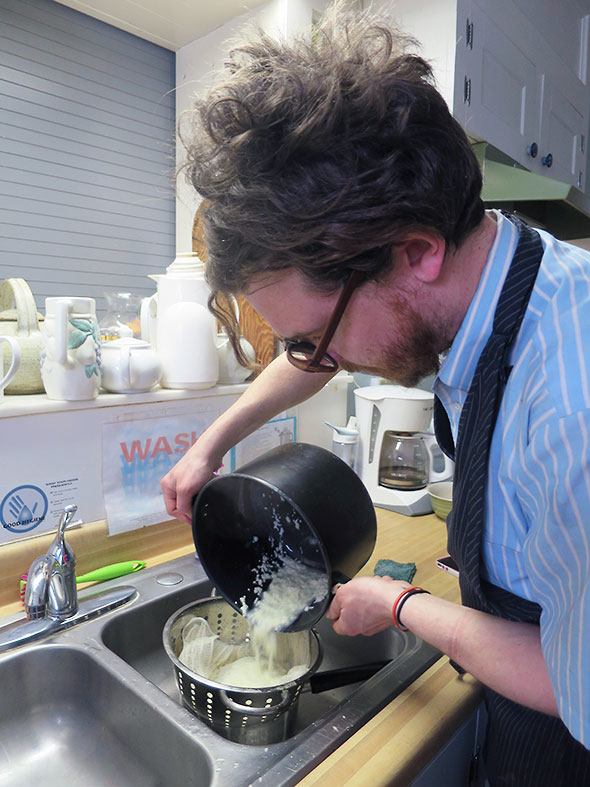 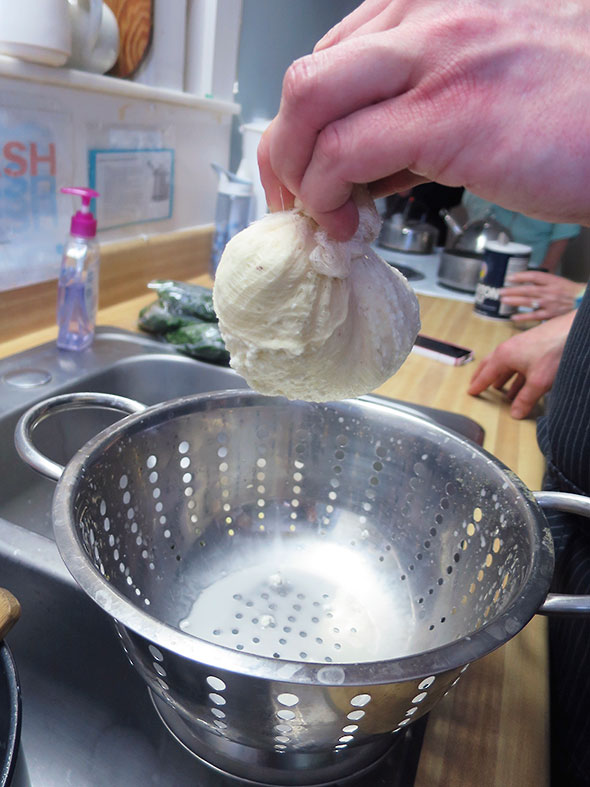 We heated the naan in the oven and cut it into triangles and began dressing plates with the saag. Corey release the paneer from its mold and cut it into cubes. We added three cubes of cheese to each plate and handed out plates to class members and senior center staff. 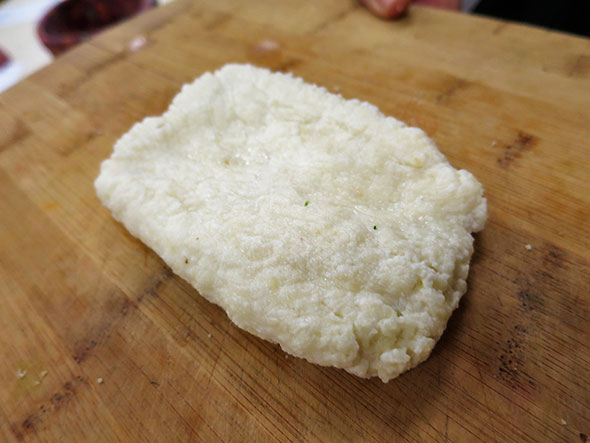 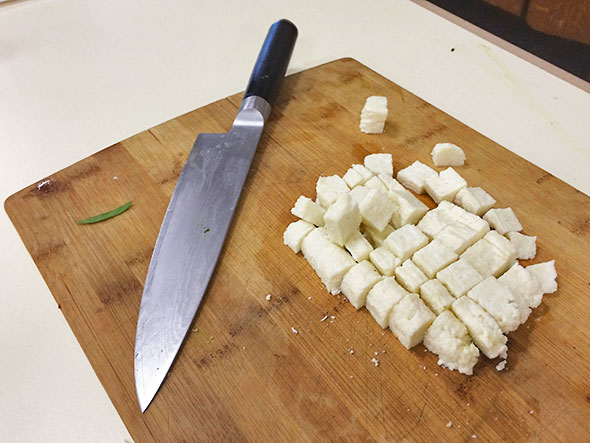 The class got into a discussion of the milk used for the dish. Corey choose Snowville milk to prepare the paneer. Snowville Creamery does not homogenize their milk which means cream natural separates in its milk. As a consequence, it’s easier to form curds from Snowville milk than homogenized milk. Members of herdshare—which are legal in the state of Ohio—can also use their raw milk to prepare paneer.

This weekend, I plan to make Corey’s saag paneer myself using a quart of freshly drawn raw milk. I’ll be back at Corey’s side again on Friday 17 April 11:15am at the Yellow Springs Senior Center, 227 Xenia Ave, making tamales with chili sauce. So far, Chef Elbin has taken us on a tour of wonderful home crafted meals from Italy, China, and India. I’m looking forward to the next trip, this time to Mexico.