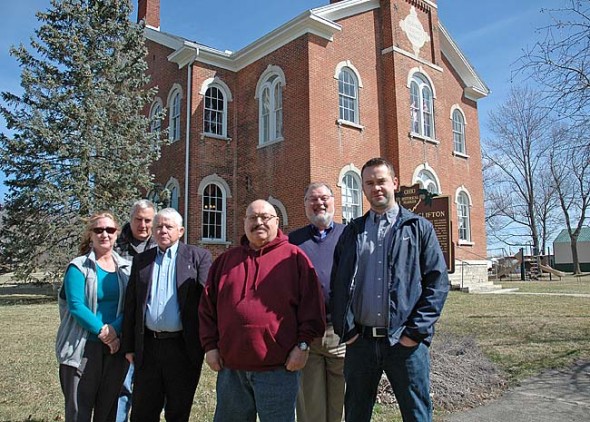 J. Goldsborough Bruff was an adventurous artist and mapmaker who captained an expedition of 60 armed men, 14 wagons, and 70 mules across the continent during the 1849 California Gold Rush. He chronicled his travels in a journal, known today as the best guidebook to the California Trail of that era. The details of Bruff’s life and the culture of the raw American West can be accessed in many volumes lodged at the Library of Congress. Or, they can be gleaned in person from the man himself — that is, the scholar actor who will portray him when Ohio Chautauqua comes to the Village of Clifton this summer.

Chautauquas started as a 19th century teacher-training event and evolved into traveling bands of actors and entertainers who brought world culture and humanities education to rural America. The troupes set up tents at stops along their route and presented live historical reenactments, read poetry and literature, and held discussions about the political issues of the time. Antioch College hosted a big tent event every year from 1907 to 1916 for town/gown academic stimulation and entertainment, and according to a Yellow Springs News editorial at the time, the chautauqua aimed to engage a more active citizenry.

“Here will be the best thinkers of the age. … The burning problems of the times will be discussed — problems that affect not only the nation but all humanity. Here, one will gain the inspiration to live a better life, to think higher thoughts and, for a time at least, will be lifted above the common drudgery of everyday toil.”

According to Alex Bieri, mayor of Clifton and a member of the village’s Chautauqua Steering Committee, today’s Ohio Chautauqua isn’t that different from the original incarnation. The events use living history scholars to bring the voices and personalities of early Americans to life so modern folk can remember their stories and talk about what they mean to the contemporary world of 2015.

“What resonates with me about the event is not just the entertainment value and the fact that it’s open and absolutely free to the public … but these history scholars dig deep into their characters and address cultural and social issues, such as income inequality and civil rights, that are still pertinent today,” Bieri said in an interview recently.

The Ohio Humanities Council (funded by the National Endowment for the Humanities) resurrected the Ohio Chautauqua tour in 1998 as its signature event, each year holding a week-long big tent series in four communities around the state. Clifton was chosen for the first time as one of the 2015 sites and will host its five-day event from June 30 to July 4.

With an official population of 153, Clifton is one of the smallest communities to host Ohio Chautauqua. But according to Chautauqua coordinator Fran Tiburzio, the event seems to work best in smaller towns, where residents seem to be more interested in coming outside to sit with their neighbors and learn some history. Clifton stood out from this year’s dozen other applicants at the host site visit by packing a room full of area leaders all offering to support the event, including Clark and Greene county commissioners and representatives from Clifton, Yellow Springs, the Greene County Visitors Bureau and the Afro-American Museum in Wilberforce.

“There was a huge showing of support from the moment I waltzed into town,” Tiburzio said.

All of the evening performances will take place under a red and white striped tent to be erected on Clifton’s school house lawn, adjacent to the Opera House. The full schedule of each day’s events was released last month and includes daytime presentations at the Yellow Springs, Xenia and Cedarville libraries, among other sites.

See the full schedule of chautauqua events at ysnews.com.