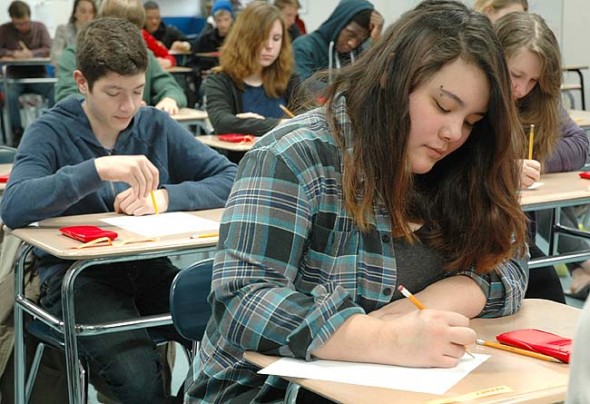 Yellow Springs public school students are one big step closer to taking significantly fewer standardized tests next school year, as the state of Ohio approved the district’s assessment waiver application last week. The five-year waiver was a request to allow village public schools to replace traditional tests in grades K–12 with competency-based assessments and to reduce the time spent on standardized testing by about 54 percent. The waiver application must next be approved by the U.S. Department of Education, which District Superintendent Mario Basora hopes could happen in the next two months in order for the waiver to take effect this coming school year.

“We are very excited about the state approval for our assessment waiver idea,” Basora said this week. “We think this is a big step along the journey we’ve been on — it’s probably the biggest step and the one we were most concerned about happening.”

Yellow Springs was one of seven school districts and seven STEM schools in the state to receive the waiver, including close partner schools, Springfield City Schools and Springfield’s Global Impact STEM Academy. All the schools are now working together to draft a common waiver application for federal approval. The chances for success at the federal level improved after the U.S. education secretary approved a similar assessment waiver for a four-school consortium in New Hampshire last month.

“I feel very confident in getting approval from the federal government [because] New Hampshire’s application is similar to ours,” Basora said.

The number of standardized tests the Ohio Department of Education is mandating students take in the 2016–17 school year will increase to 97 test sessions of several hours each for K–12 students, including kindergarten readiness assessments, PARCC, STAR, high school end of course exams and 11th grade national assessments. The number of days involved varies for each grade, but for example, third graders will use nine full days for standardized testing; fifth graders will use 11. Already this year the amount of testing has increased from last year to a level Yellow Springs High School Principal Tim Krier found overwhelming, which he communicated at the March school board meeting.

In addition to the oversize volume of tests, according to Basora, the current tests don’t do a good job of measuring the kinds of skills that current business leaders have said are needed in the work force — skills such as critical thinking, time management, adaptability and initiative.

“Ultimately what we want is an accountability system that measures what we value instead of trying to value what we measure,” Basora said at the school board meeting.

So as an alternative, the district proposes to cut the overall testing by over half to about 45 sessions and replace tests like PARCC (three-hour bubble-fill and short answer test) with truly performance-based tests such as Stanford University’s SCALE & SCOPE assessment (two-week project-based test). A sample Stanford assessment in algebra II for high school juniors, for example, asks students to compare two states’ motor vehicle laws using data sets and reports to make a formal recommendation, with original diagrams, graphs and formulas, naming the most appropriate one. The work is expected to take one to two weeks, some of which is done in pairs or groups, and may involve a formal presentation. Though the students should have learned the skills they will need to complete the test, the assessment is designed to be somewhat embedded in the curriculum itself, Basora said.

The evaluation of these intense performance-based assessments is a point that hasn’t been clarified, but the consortium of schools that received the Ohio waiver are discussing the possibility of helping each other to evaluate or grade each other’s students.

The district created its waiver application in collaboration with the teachers’ union and is still looking for input from the community and its seven fellow school districts before sending the final application off to Washington. Though it’s taken over a year of work lobbying with local and state officials to win the right to apply for a waiver, and then make the actual application, Basora feels the effort is worth it because it represents the future of student assessment. And Yellow Springs, he said, is taking the lead.