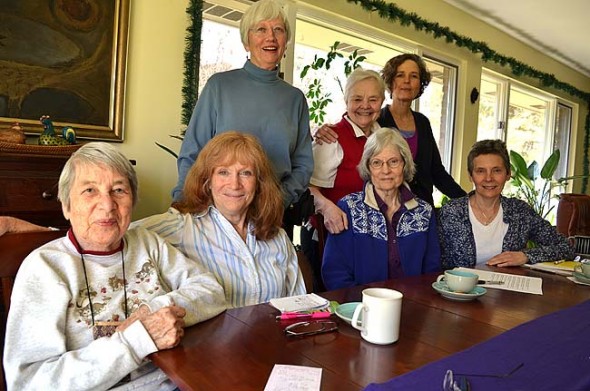 Founded in 1980, the Feminist Health Fund raises money from the community and disperses it to needy women suffering from a catastrophic illness. Current board members are, clockwise from front, Esther Hetzler, Kathy Robertson, Sue Parker, Janet Ward, Joyce Morrissey, Denise Cupps and Marianne Whelchel. Not pictured is Elizabeth Danowski. (Photo by Megan Bachman)

When Moya Shea received an unexpected medical bill from a clinic a few years ago for a procedure she thought was covered by insurance, she was startled. Quite ill at the time, she turned to a local group for help.

Not only did the Feminist Health Fund of Yellow Springs agree to pay Shea’s bill, but the group’s board members told her how to negotiate to have it cut in half.

“They were extremely helpful and creative,” said Shea, who agreed to talk about her experience. “For face-to-face help and help for those who fall between the cracks, I am glad they are there.” Now in a better financial situation, Shea is considering becoming a contributor.

The cycle of women supporting each other continues today as it did when the Feminist Health Fund was started in 1980. Now, as then, the local 501(c)(3) raises money from the community, and disperses it to needy women suffering from a catastrophic illness. All cases are kept anonymous.

The group aims to help area women who need help paying medical bills, including those who are low-income, without health insurance or seeking holistic healthcare alternatives not covered by insurance. But many women are reluctant to ask for help, even when it is needed most, board members said this week.

“Any woman who picks up the phone and contacts us, that’s a real act of courage,” said board member Joyce Morrissey. “Facing an illness is really difficult and to ask for help is not what we’ve been trained to do.”

Fellow board member Janet Ward said the group, and its moniker, are essentially about “strong women helping other strong women.”

“It’s culturally engrained to be independent, to stand on your own two feet and not ask for help,” Ward added. But when local women do ask, the health fund is typically able to respond.

“No matter how small our budget has been, it’s always worked out that we’ve had money to help someone who needed help,” Ward said.

To inquire about the application process, or to donate, contact the group at mariannewhelchel@gmail.com, 937-767-1033 or P.O. Box 323, Yellow Springs. Information supplied by women about their financial and health situations remains confidential. Donations are tax deductible.

The Feminist Health Fund has paid sums as low as $35 and as high as $3,000 in its 35-year history, while most requests are in the range of $1,000. Money is available for biological women and women-identified people in Greene, Clark and Montgomery counties, though the majority of recipients are from Yellow Springs. The fund does not pay for elective procedures, including abortions and cosmetic surgery.

A unique feature of the Feminist Health Fund is its willingness to pay for everything from traditional, allopathic treatments to holistic alternative practices that are often not covered by insurance. The fund has paid for dental care, eyeglasses, dialysis, acupuncture, psychological counseling, diabetic supplies, prescriptions and supplements and treatments for cancer, Crohn’s disease, gastritis, fibromyalgia, hemorrhagic cysts and much more.

Feminist Health Fund board members also help women navigate the complex world of medical billing, and have negotiated on their behalf for bills to be dramatically reduced. Longtime board member Marianne Whelchel is often the one making the phone calls to get bills lowered or set up payment plans, and said that hospitals and other providers are more likely to negotiate when they learn the patient is being assisted by an established organization.

Whelchel, a former women’s studies professor at Antioch College, continues to see the value in assisting local women, who are still disadvantaged compared to men, and often suffering from multiple crises — health, personal and financial — at the same time. And figuring out how to pay for health services is often one of the biggest challenges of an illness.

“For many women, it’s a nightmare,” Whelchel said.

While the Feminist Health Fund typically pays healthcare providers directly, they have also assisted women with rent payments and gas bills when they had to be hospitalized for major illnesses, board members said. The group prides itself on being able to respond quickly when necessary.

Now the Feminist Health Fund is looking to develop a network of local resources so the group can support women in other ways, not just financially. Morrissey is spearheading the effort to create a “resource bank” where local women could volunteer for each other to receive “hours” that they later use at local providers. For example, women may need help navigating billing, massage therapy or someone to cook for them while they are sick, Morrissey explained, adding there are many local providers who are already discounting or donating their services to help villagers in need.

“It’s the spirit of women helping women in a quiet way,” Morrissey said of the local wellness community in general. “There are resources here rather than just financial. It’s an example of the communities within communities here.”

The Feminist Health Fund had its roots decades ago in the support a group of local women gave to resident Joan Margaret to help her pay for cancer treatments. Margaret had come from California to Yellow Springs to find health services and friends here and crafted an alternative healing program that included raw foods, visualization and intestinal cleansing, according to a history of the group in the 1999 book “Celebrating Women: The Women’s Park of Yellow Springs.” When Margaret’s money ran out, her friends set up a fund for her, which Margaret repaid in kind when she regained her health by co-founding the Feminist Health Fund to help others. According to board members, local feminist Gene Trollander was also instrumental in its founding, and in coming up with its distinctive name. Today, Margaret is healthy and practicing as a Doctor of Osteopathic Medicine.

Shea, who is now financially able to donate to the group, views the Feminist Health Fund as a natural part of a small community where people take care of each other.
“The thing about small communities is that they are human-sized and humans respond to each other in need,” Shea said. “We are lucky.”