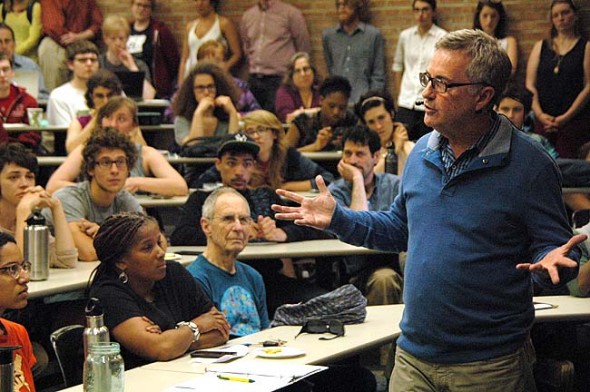 Antioch College President Mark Roosevelt addressed a capacity crowd on campus Tuesday afternoon with the news that he will be stepping down in December of this year, when his contract expires. He says he “will have finished” what he tried to do. (Photo by Matt Minde)

At a meeting attended by several hundred in the Antioch College community on Tuesday, May 5, College President Mark Roosevelt announced that he will no longer lead the college when his five-year contract expires at the end of 2015.

“We’ve taken a dream and made it a reality,” Roosevelt said to college faculty, staff and students, stating that he’ll leave his job “with enormous regret and mixed feelings.”

However, he said, he believes, “it’s the right time. This gives the college the opportunity to find a new leader to take the college to the next level.”

The decision to leave is clearly Roosevelt’s, and Board of Trustee Chair Frances Horowitz of New York City, who was unable to attend due to a recent fall, thanked him in a statement read by Trustee Maureen Lynch.

“You have exceeded our expectations — which were high — and set us on a path of momentum that we have every confidence will be maintained in the years ahead,” Horowitz wrote.

Hired as the college’s first president a year after Antioch reopened in 2009, Roosevelt faced the daunting task of relaunching a liberal arts college at a time when liberal arts colleges are closing their doors. When he came to Antioch College five years ago, “There were no students, no faculty, no dormitories, no farm, no solar arrays, no identified means for renovating the campus,” Glen Helen Director Nick Boutis said at the event. “It’s extraordinary what we’ve accomplished. I’m deeply grateful that you’ve positioned the school to succeed.”

At the event, Roosevelt also announced that the Morgan Family Foundation has donated $6 million to the college, the largest single gift since Antioch’s rebirth, and perhaps its largest gift ever.

In an interview on Monday, Roosevelt said that while the task of reviving the college is not complete, “I feel a certain sense of completion.” When he leaves in eight months,  “I will have finished what I tried to do for as long as I could.”

And it’s time, Roosevelt said, “to take a deep breath and to consolidate our gains.”

There have been considerable gains, Roosevelt said. First and most important, the college is well on its way to accreditation. The process, which provides criticial legitimacy to colleges and universities, has been unexpectedly long and difficult but after a successful 2013 site visit from the North Central Association, or NCA, accreditation team, Antioch became an official candidate for accreditation, which allows students to receive federal aid. The second and last site visit will take place this November, when Roosevelt will still be on the job. The college could receive full accreditation in June 2016, he said.

“I’m very hopeful. I feel confident,” he said, stating his confidence is linked to the progress the college has made addressing concerns raised by the NCA team. Those concerns centered on financial instability, and the Morgan Foundation gift of $6 million helps to stabilize finances, he said, stating that the college budget will be in the black for 2015, as it has been each year since he arrived.

The need to raise money has been a constant pressure for Roosevelt. So far $75 million has been raised, and the college also received about $30 million from the sale of YSI stock. Along with operations, the funds have financed large renovations on a campus that had for years been allowed to deteriorate, with the largest renovation that of the Science and Art building ($30 million) followed by the Wellness Center ($8 million), Birch and North Hall dormitories ( about $11 million) and the construction of geothermal and solar energy installations. The college also is renovating West Hall for additional student housing, along with the Foundry Theater.

But the need for campus improvement remains huge, Roosevelt said in the interview. The complete renovation of facilities is estimated to cost about $100 million, rather than the $30 million estimated cost made by earlier college leaders, because the deterioration of campus buildings was so profound.

“About the only thing I’m angry about is how the campus was let go, and how everything was done on the cheap,” Roosevelt said about the college previous to its 2008 closing by Antioch University.

The unexpectedly high cost of upgrading the campus was one of several surprises for Roosevelt when he took on the job, he said in the interview. The other two were the difficulty of achieving accreditation and “the woundedness of the community,” around the issue of former faculty of the college, with strong voices raised both for and against rehiring former faculty members. In the end, while former faculty were not hired to teach, several were brought in to the revitalized college in administrative positions.

While the need for ongong fundraising remains critical, significant progress has been made in the depth and breadth of contributors. Before its closing, about 3 to 4 percent of alumni donated to the college, and that number is now up to 30 percent. The college has received in five years about 40,000 individual donations from 8,500 contributors, Roosevelt said.

What these challenges have in common has been the need for supporters to believe in the viability of the reborn Antioch College, Roosevelt said, and instilling that belief has been his most important task.

“My job was to build belief in the possibility of the college’s success,” he said.

He’s proud of his work, Roosevelt said, but ultimately the pressures of constant fundraising weighed on him. The pollen-rich Miami Valley has been hard on his health and worsened allergies and asthma attacks. And Roosevelt and his wife, Dorothy, feel a need for a change.

Roosevelt came to the Antioch College job one year after the college was reopened by alumni after its 2008 closure by Antioch University, following Matthew Derr, the revived college’s interim president. Previously, Roosevelt was for five years superintendent of schools in Pittsburgh, where he instituted significant school reform. A Harvard-educated lawyer, he had previously served as a state legislator in Massachusetts and led an educational reform effort in that state. He also ran unsuccessfully for governor of Massachusetts, was the CEO of Massachusetts Biomedical Initiatives and managing director of the Massachusetts Business Alliance for Education, and taught government at Carnegie Mellon University.

On Monday, Roosevelt said he does not know what his next job will be.

In the interview Monday, Horowitz said that the college revival will continue on pace regardless of Roosevelt’s leaving.

“I think we’re committed to maintaining the momentum already established,” she said. “While a new person may have their own vision, nothing already accomplished will be undone.”

At the Tuesday event, Trustee Malte von Matthiessen, who will chair the search committee, said the committee is being formed, with representatives from students, faculty, administrators and the Board of Trustees. The search will be conducted by Isaacson, Miller, the same firm that brought Roosevelt to Antioch.