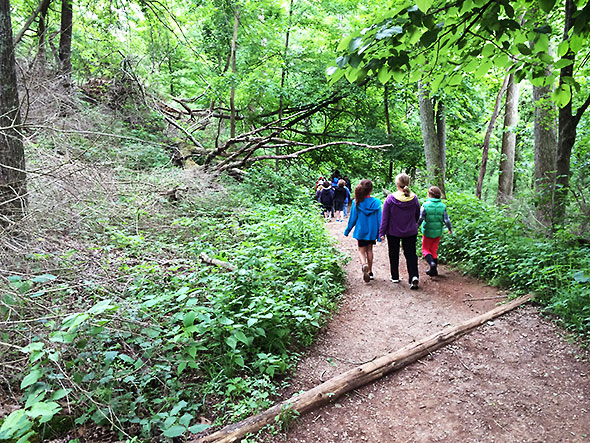 BLOG-A Walk in the Glen

Monday morning my daughter got up and dressed with purpose. Her last day at Mills Lawn School was supposed to be the preceding Friday but, due to a hard winter, the school calendar stretched into June’s first week. On this first makeup of winter’s snow days, my second grader’s class had planned a walk in the glen. We were not sure however if the weather was cooperating. The morning sky was filled with gray clouds and, through rain drops were not falling yet, the temperature was. Feeling optimistic, she dressed in long sleeves, warm pants, old sneakers, a rain jacket, and hat in preparation for a lengthy, potentially muddy morning in the glen.

When I entered Mrs Hoover’s classroom at 8:30am, the class was deep in conference. Though everyone was outfitted well for a cool morning hike, there was general concern over rain. The weather report and radar threatened a downpour. Though the forecast indicated that the rain might hold off until noon, a healthy skepticism remained. 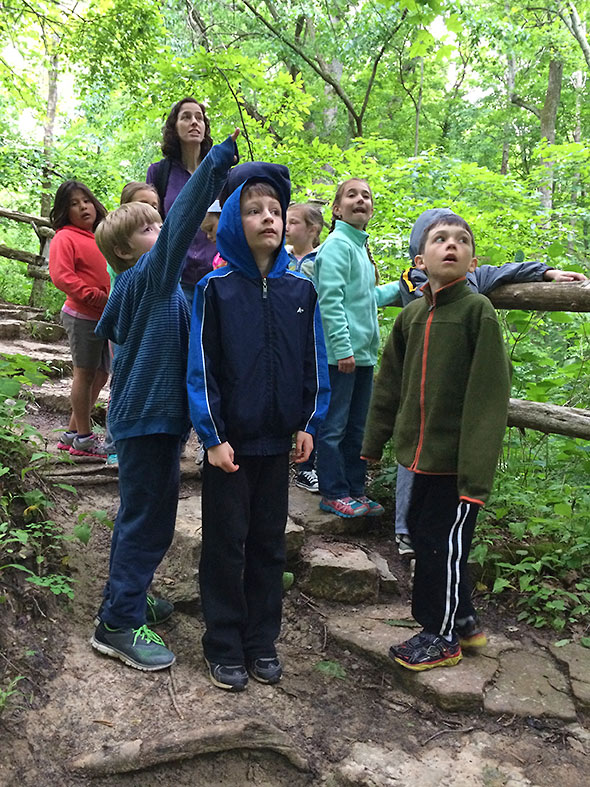 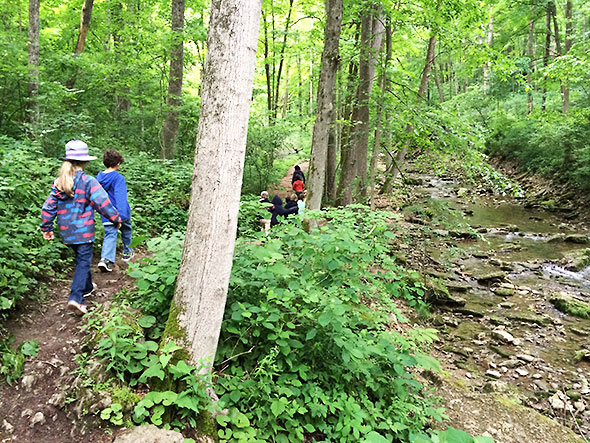 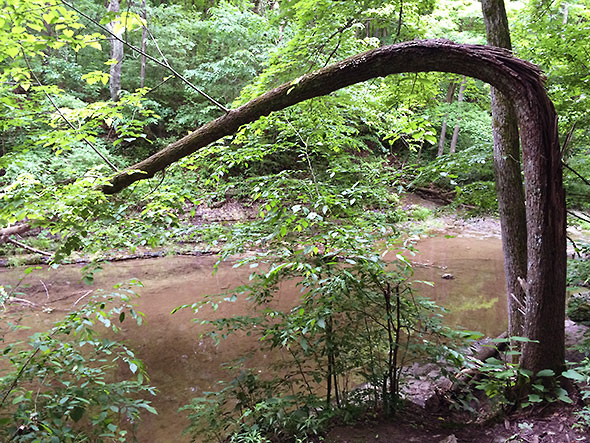 By 9am, however, the promise of a vigorous walk among forest and fauna overcame the fear of a soaking and the group was off. They exited out the front door—three adults and twenty children—and headed south on Walnut Street then west on Limestone. We rendezvoused with my son on Limestone—dropped off by his dad—and, after our young man promised to stay close and keep pace, we proceeded down the bike path to the main entrance of Glen Helen. After a review of hiking ethics, we entered the glen at the stairwell near the Trailside Museum. We crossed the Yellow Springs Creek first—pausing to count the half dozen or so fish swimming south of the bridge—then proceeded up the Birch Creek path toward the waterfall known as the Cascades. 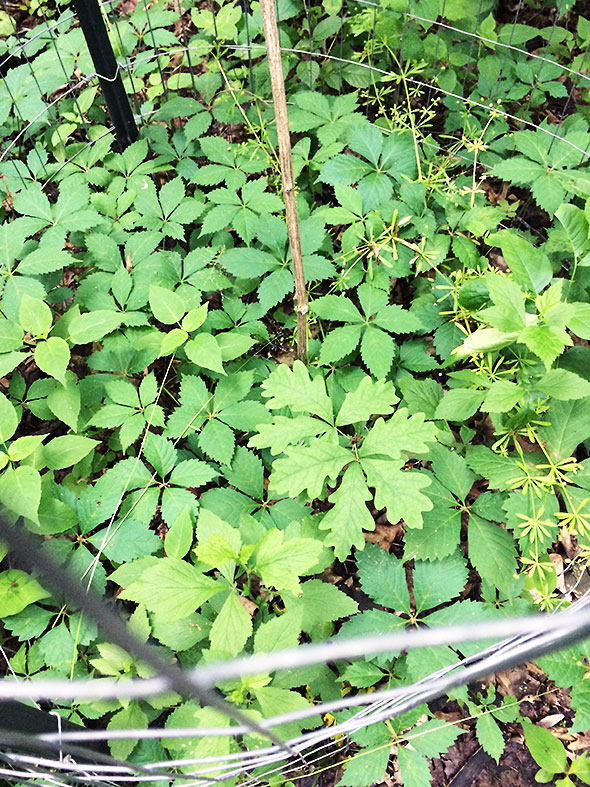 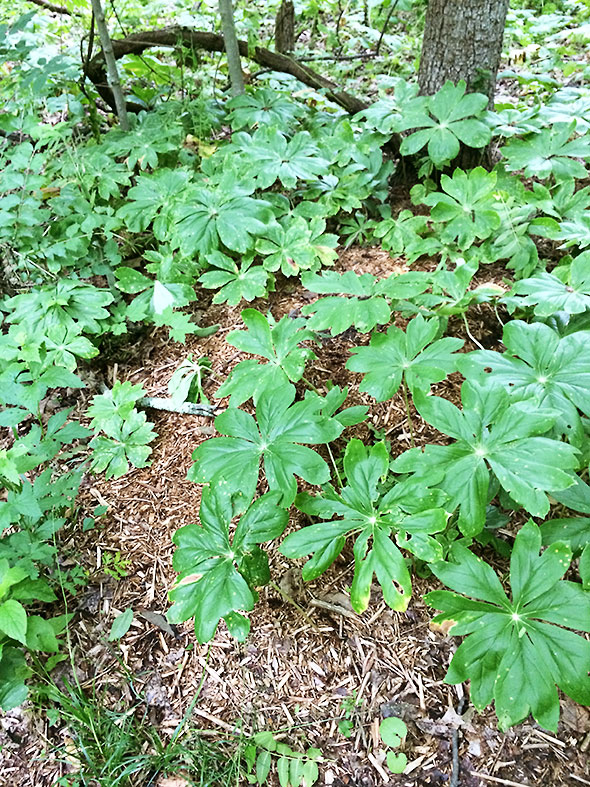 We walked quietly alive to the exotic calls of birds. Heidi Hoover and instruction aide Jane Jako pointed out the stands of flora: wild Ginger and Geranium, hydrangea and water flowers, may apples and poison ivy. We passed several cages and noted the elegant curving line of leaves on the white oak saplings within. Recently planted as part of the ongoing restoration of the forested glen, each white oak stood less than a foot high and just hovering over creeping ivy. A uncommon native, the most well known white oak marks the memorial of Helen Birch Bartlett, the glen’s namesake and longtime resident. 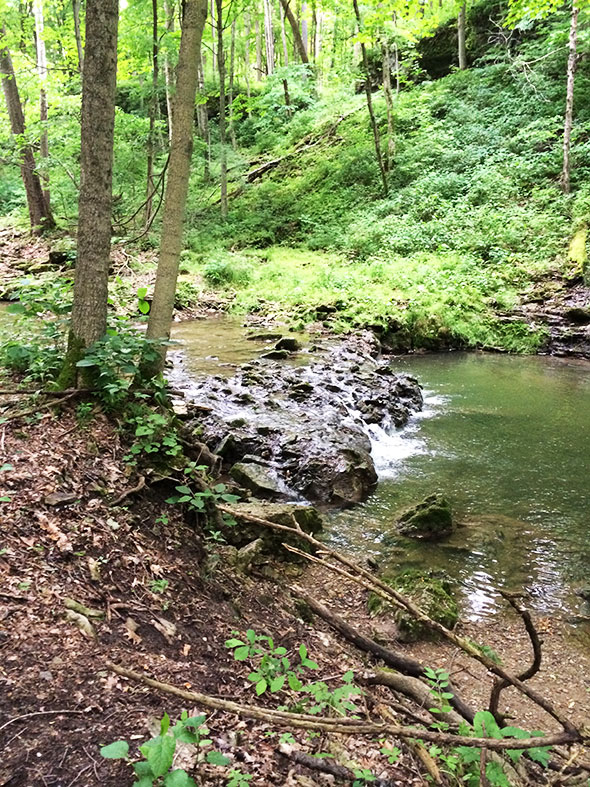 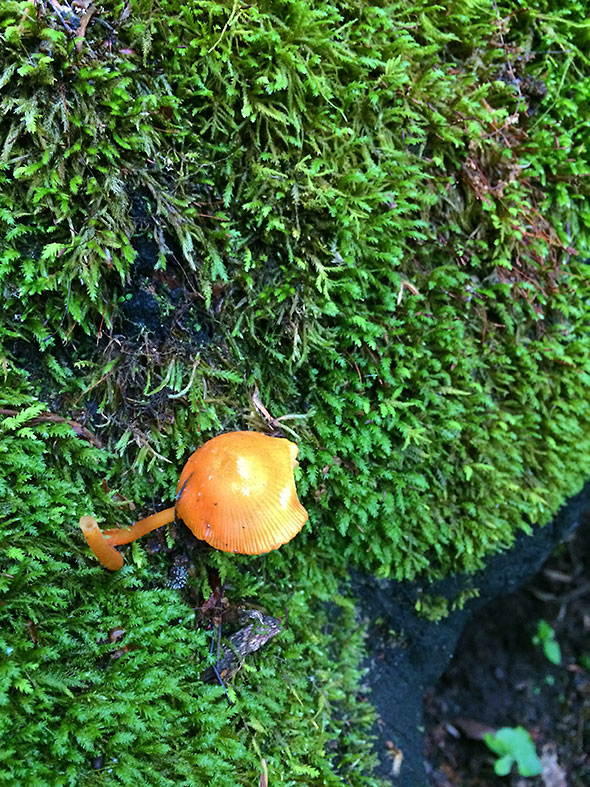 The children demonstrated their own familiarity with the glen’s features and pointed out several findings including caves and overlooks, clusters of eggs on leaves and the many mushrooms springing from the damp forest floor. Rare and ethereal, most appeared in clusters of pale pearl but two toadstools popping up from a carpet of moss were an bright glossy orange. 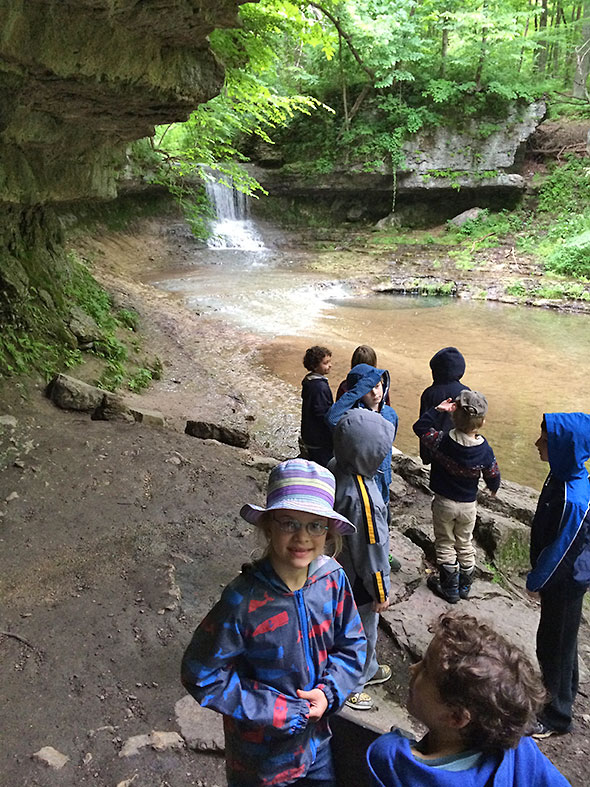 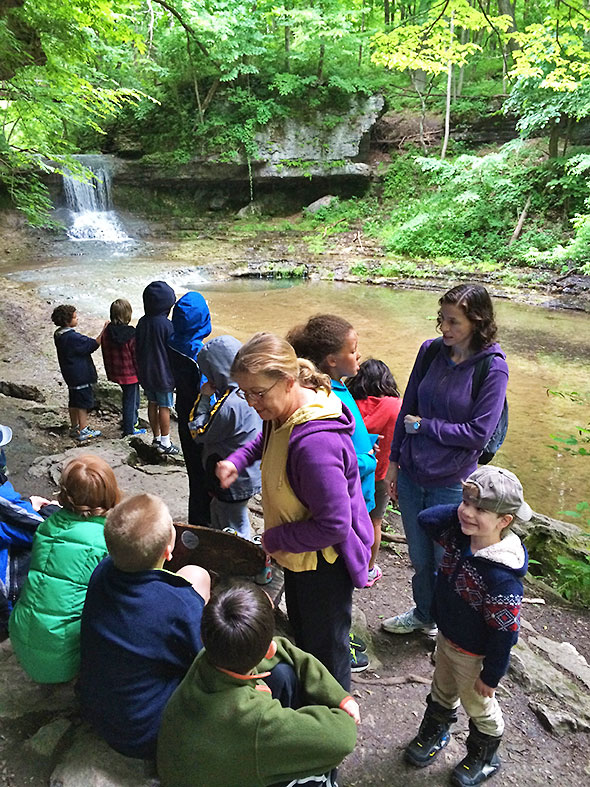 We walked up to and around the Cascades before choosing the path that would lead past Helen’s white oak and the indian mound and then to the Yellow Springs. As promised, my son had no trouble keeping up with the group. Instead, the lagger was me. I had put on creek shoes instead of hiking boots and was regretting the choice. My son had chosen boots himself–Batman boots—scuffling their soles on Inman Trail. He wore a Glen Helen baseball cap for the occasion. The brim shielded his eyes when he had first descended the stairs, but now he was wearing it front to back so that he could look up at the leaf canopy that he had loved since a baby. When he walked beside me, he made sure I knew about the poison ivy—perhaps noting my open toe sandals with concern—and then would bolt forward and back among the other children to confer with Hoover and Jako. 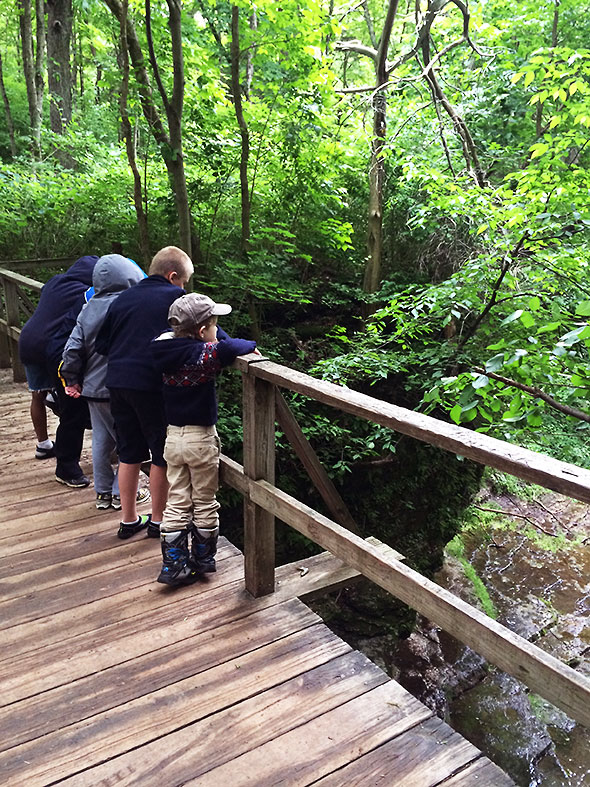 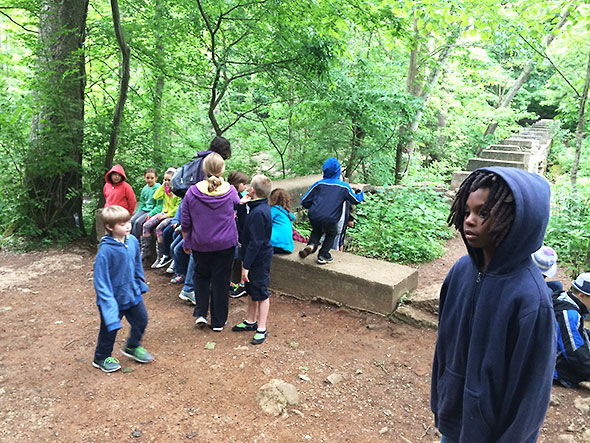 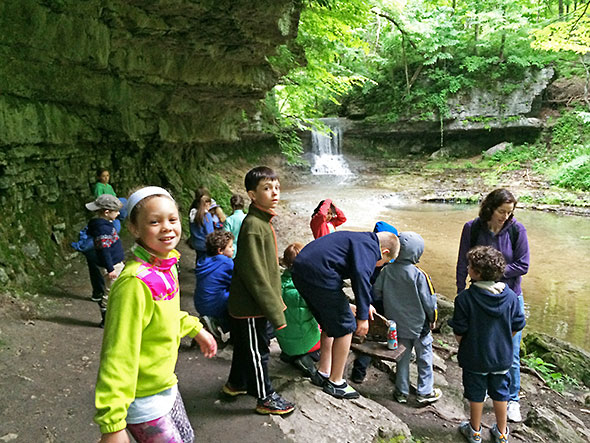 Though we saw only the occasional bird take wing and squirrel out foraging, we had plenty to draw our attention. The glen was dressed in fresh spring green, the leaves of its canopy still tender and translucent. The carpets of moss were particularly thick on the glen floor, snow white violets dotted bouquets of green leaves, and various forms of fungi sprouted from felled trees and floor litter. The wet conditions of the past day or so had transformed the glen with subtle detailing but the kind that intrigues and charms. 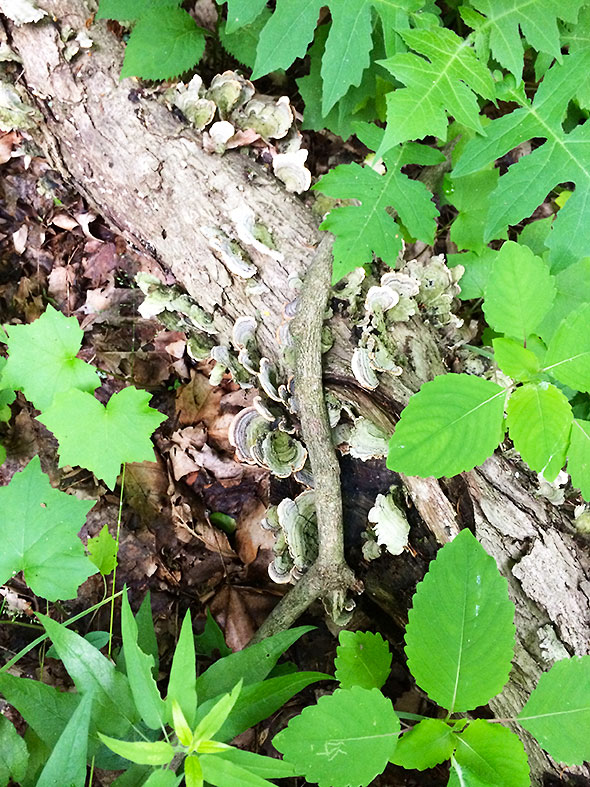 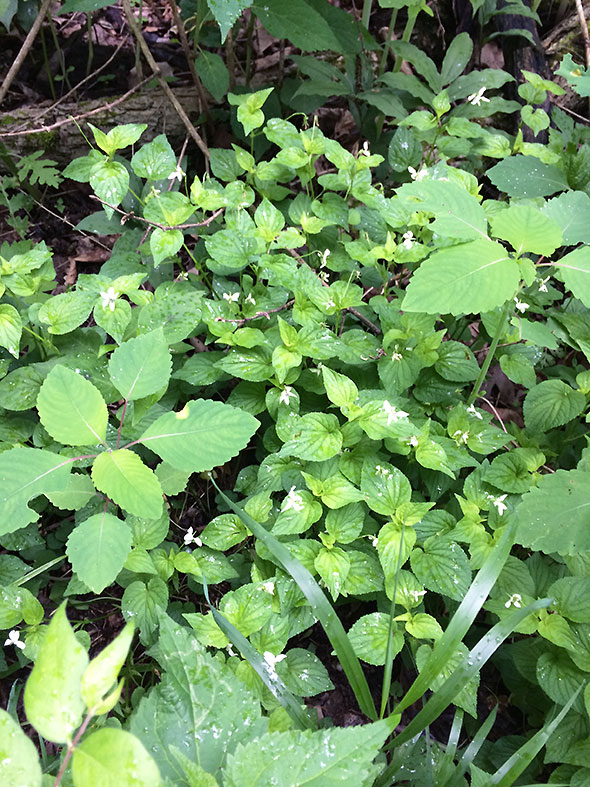 The air temperature was cool for the duration of our brisk walk but, setting a quick pace, we remained comfortable. Our earlier skepticism about the weather was answered by a few raindrops—filtered by the forest canopy—just as we started to work our way back west. “It’s alright. We won’t melt.” Mrs Hoover reassured the group. 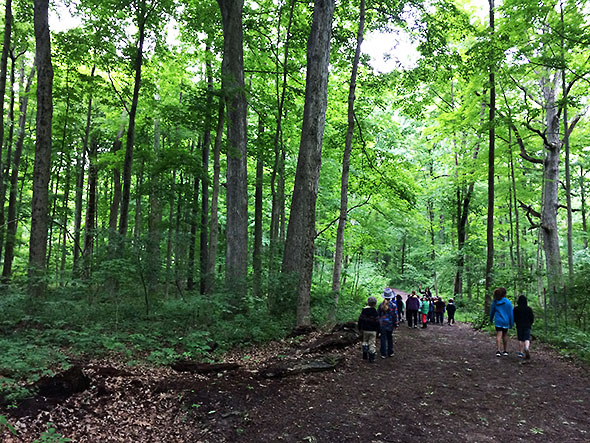 We took one last pause lining up along a retention wall of the Old Dam and listening to the water fall over the mouth of the Grotto, the west-facing cave that my children call Rainbow Rock. Kicking off our final push home, we crossed the Yellow Springs Creek avoiding the washed out bridge to pick across creek rocks until we reached the western slope that would return us to the bike path above. 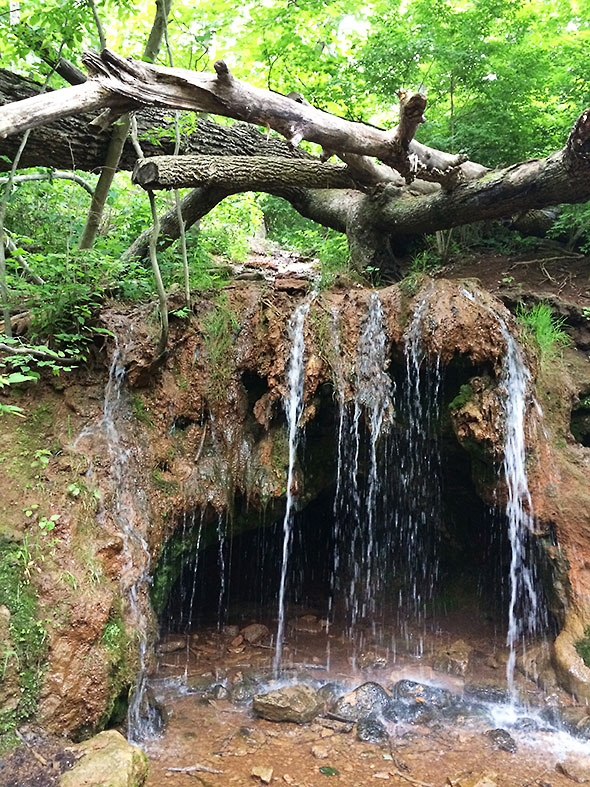 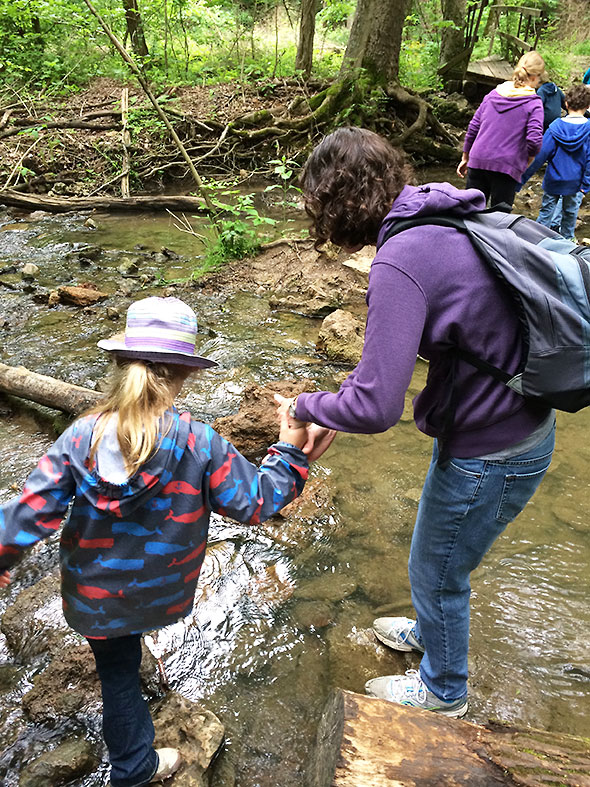 Before we wound up the hill to Talus Trail and left the envelope of the glen, Mrs Hoover encouraged the class to return to the glen over the course of the summer. Even within a single season, it’s always changing. Week to week, there is so much to see, so much to surprise as the glen—like a small child—shifts, metamorphizes, and grows. The experience of watching Glen Helen’s seasonal transformations—largely organic yet attended and tuned—is exactly like watching Mrs Hoover’s charges. So much has changed since we first gathered together last August. So much will have transpired when we gather again in summer’s last days.