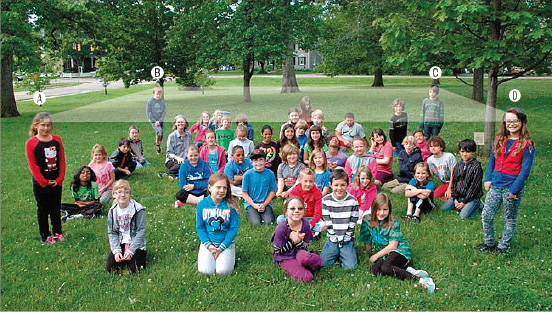 Mills Lawn third-grade students studied quadrilaterals in math class this year by getting outside and identifying four-sided shapes in the community. (Photo by Carol Simmons)

One of the challenges for teachers of mathematics is helping students see the relevancy of seemingly abstract concepts in their daily lives. “When will I ever use this?” is an oft-muttered refrain as young learners scratch out worksheet problems at classroom desks.

That wasn’t the scenario this spring, however, in the Mills Lawn classrooms of third-grade teachers Peg Morgan and Jeff May. The two educators teamed up to develop a project-based learning unit that not only addressed state content standards for third-grade math, but also got their students up from their desks, out of their classrooms, and into the community.

The state content standards call for the ability to recognize and understand the attributes of a quadrilateral. For those of us who have grown rusty with our basic math concepts, third-grader Lucas Dun explained: “Quadrilaterals are shapes with four sides.”

Autumn Cipollini continued: “They include the rhombus, the square, rectangles, and parallelograms.”

The Mills Lawn students’ task, said teacher Morgan, was to investigate how quadrilaterals are “part of our Yellow Springs community.”

Nyekeira Thomas described the beginning of their quest. “We first started out in the back of Mills Lawn, in the fourth-sixth (grade) playground.”

Gabriela Skidmore continued: “After we did the playground, we broke into groups to sketch quadrilaterals out in Yellow Springs.”

They soon discovered that they had no trouble finding plenty of four-sided shapes.

“Quadrilaterals are everywhere,” said Joslyn Herring. “All you have to do is look at a thing, and go, ‘oh.’”

“I don’t think it was hard at all,” agreed Derek Reed. “Like at the skate park — there were tons there.”

“They were even in the Glen,” said Violet Babb. “I thought they would be more in the town, in the buildings, but they’re in nature, too.”

The students sketched their findings, and then made photographs, which they marked with dry-erase crayons to highlight the quadrilateral shapes. They also wrote about their discoveries. And they eventually bound their work in individual scrapbooks.

Max Lugo said he learned a lot and enjoyed it too. “When I first heard about (the quadrilateral project), I thought, ‘I don’t know what that means.’ But after we started, it was actually pretty fun.”

Nevaeh Smith said she was enthusiastic from the get-go. “When we first started (the project), it sounded like it was exciting and fun,” she said.

It appears to have succeeded in prompting the students to become more involved in their learning. “We got ideas,” Nevaeh said.

Math is a subject that can elicit fear and loathing among students, but Mills Lawn third-graders now agree that’s a bad rap.

Lily Kibblewhite is one who changed her mind over the course of the project. “At first when I heard about this, I thought it was going to be pretty boring, because it was just math,” she said. “I had no clue that there could be a quadrilateral in a shadow.”