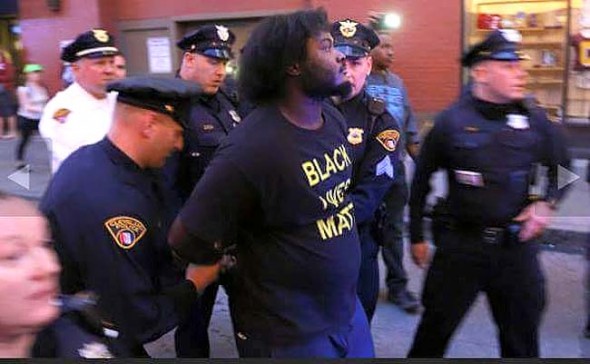 Local resident Talis X was arrested last weekend at protests over the acquittal of a Cleveland police officer of charges stemming from a 2012 shooting of an unarmed black couple. Talis X will speak about his experiences with police violence and injustice at an Antioch College teach-in on mass incarceration and prison justice Saturday, May 30, from 1 to 4 p.m. in McGregor 113. (Still photo from CNN video)

Local landscaper Talis X spent Memorial Day weekend in a Cleveland jail after leading a spontaneous street protest on Saturday when a judge acquitted a white Cleveland police officer in the 2012 shooting of an unarmed black couple.

Talis X was visiting his hometown to protest another police shooting — that of 12-year-old Tamir Rice, who was gunned down by a white officer last year while holding a replica handgun — when the news broke about acquittal. He headed downtown.

“There were two to three hundred gathered in Public Square and more were jumping out of buses,” Talis X said. Arriving amidst the chaos, he organized a mass of people in chants through an alley, upsetting diners in a nearby restaurant before the police showed up.

“With no justice, there should be no peace,” Talis X said of the disturbance. “I want to disrupt people’s happiness because I’m not happy, and I can’t let you do this to my brothers and sisters anymore.”

Talis X was one of 77 protesters arrested that day, with a video arrest on CNN. He went on to lead social justice songs in jail and collect the names and phone numbers of his fellow inmates. They are now organizing together for justice as the “Cleveland 77.”

“I turned that negative into a positive,” Talis X said. “There were 77 of us who were arrested and now we’re all moving together, we’re all united.”

Talis X will speak about his recent experiences as a prisoner held in deplorable conditions and as an activist working to bring justice for victims of police violence at an Antioch College teach-in on mass incarceration on Saturday, May 30. Talis X will join with correctional officers, formerly incarcerated people and educators and activists during the event, 1 to 4 p.m. in McGregor 113.

As fellow panelist Cathy Roma, who has been teaching in prisons since 1990, sees it,  prisons are a massive business that aren’t about rehabilitation but about “keeping people in the beds.” The problems are systemic, she said, ranging from the failed War on Drugs to the cancellation of Pell grant money for prisoners to earn a degree while they serve time.

“It is our country’s racialized form of control — we had slavery, then we had Jim Crow, now we have prisons,” Roma said.

The teach-in caps a four-day long series on prison justice on campus initated by third-year Antioch students Charlotte Pulitzer, Charlotte Blair and others. With an eye to the larger issues of police brutality and racial oppression, the event also focuses on the difficulties faced by prisoners with a disability.

Other events scheduled are a presentation on “Disability Incarcerated” with a University of Toledo professor on Wednesday, a screening of the documentary “The New Asylums” at 7 p.m. on Thursday, in the Antioch College Science Building, room 219, and a TEDx Talks screening from the Marion Correctional Institution at 7 p.m., on Friday. There is a $5 suggested donation for each event, or the donation of two to 12 books for prisoners.

Pulitzer wrote in an e-mail that she came up with the idea for the event as part of an Antioch independent study on prison justice issues in order to “wake people up.”

“There is such an oppression of voices and experiences in our own backyard that we need to be made aware of,” Pulitzer wrote. “To not listen to those voices is not only perpetuating that oppression, but it also denies a huge opportunity to better our own communities.”

Pulitzer has spent the semester visiting with nine incarcerated women at the Dayton Correctional Institution as part of an independent study with three other Antioch students. After hearing their experiences of the justice system, Pulitzer said she believes that the system is broken and more needs to be done to “stop the mass incarceration and oppression of our brothers and sisters.”

Blair said that visiting the prison as part of the independent study has been an eye-opening experience.

“There is definitely injustice happening and as a white Antioch student it’s easy to be buried in your books and not be exposed to other people’s problems,” Blair said.

Antioch assistant professor of cultural anthropology Emily Steinmetz, who is advising the independent study, is also teaching in the prisons this semester as part of an “inside outside” class where Antioch students learn alongside prison inmates, exploring subjects such as race and citizenship. Learning together “breaks down the stereotypes of each group,” Steinmetz explained.

“We think incarcerated people are scary, but when you meet them as peers, you forget they are incarcerated,” Steinmetz said. “The common humanity is what you see.”

Other speakers at the Saturday teach-in may include a group of incarcerated men from Marion Correctional Institution, who will speak via Skype; a few female correctional officers from the Warren Correctional Institution; Danni West of TGI Justice Project, a group of transgender people in and out of prison working to fight against “police violence, racism, poverty and societal pressures;” a representative from Black & Pink, a group speaking out against “the violence of the prison industrial complex against LGBTQ people;” Najmunddeen Salaam of the Healing Broken Circles non-profit that educates and trains incarcerated people; Cheryl Meyer of Wright State University, an author on maternal filicide and female reproductive rights, and Jonathan Platt, an Antioch alumnus who started Story Chain, a project to record prisoners reading books to their children. A final presentation will focus on sentencing and re-entry issues for people labeled as sex offenders, according to a handout.

Roma has spent 25 years in prisons, first as a Wilmington College professor, and now as a choir director at three prisons, which she visits every week. She believes in the importance of “cross pollination” between inmates and “outmates” and in the power of music to spur change.

“Lives can be changed when people go in and see what’s going on in prisons,” Roma said. “I also want to make life better in there by bringing [the inmates] music and I also want to hear their music.”

Roma, who has brought the local World House Choir she directs into the prisons for concerts, also believes music can unify people, make them feel safer and help them control their own space, citing the fact that every movement for social change has been accompanied by singing and chanting.

Talis X only recently learned chants as part of Black Lives Matter Miami Valley, and now leads protestors in his own versions, such as “OH–IO, police brutality has got to go.” A victim of police brutality when he was 14 years old who claims he is still today stalked and harrassed by police because he is black, Talis X said he decided he would risk  jail time for the cause of justice:

“If I have to take the risk, if that is what it takes to change things, I don’t mind putting my life out there.”