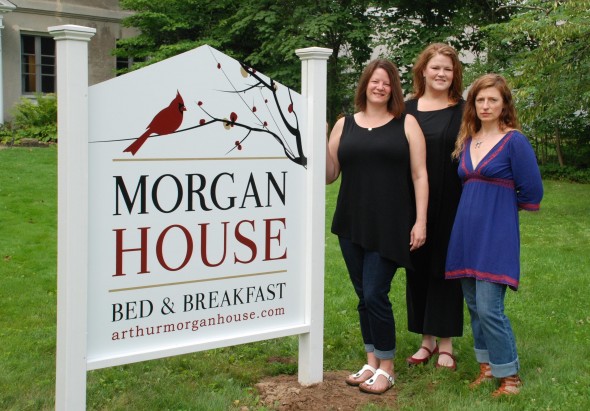 An open house for the Arthur Morgan House

The task of preserving the historic Arthur Morgan House Bed & Breakfast, open to overnight visitors for nearly 30 years, is now to village resident Stacey Wirrig, who purchased the six-room B&B on Limestone Street late last year. In words of Wirrig, the former residence of Arthur and Lucy Morgan is a “community treasure” and she’s confident it will continue to attract visitors, while she has relished the process of restoration.

“I see potential in places, with their beautiful histories,” Wirrig said. “I enjoy bringing them back up to their glory.”

To showcase the changes, the new host of the Arthur Morgan B&B is throwing a housewarming party Thursday, July 23, from 4 to 7 p.m. at the B&B, 120 West Limestone St. The event will feature complementary hors d’ouevres, tours of the property and an art exhibit and sale of the paintings of the late Robert Whitmore, who taught at Antioch College from the 1920s to 1950s. The event is free and open to the community.

Wirrig purchased the Arthur Morgan House last November from Susanne Oldham, who owned and operated the B&B for the last decade. With experience in restoring old homes, interior decorating and tracking down unique modern and antique furnishings, Stacey Wirrig has since been busy overseeing a renovation she called “fresh modern” and which has included new carpeting, painting, furniture and custom-built beds. Above all, Wirrig has focused on making changes that align with the home’s rich history.

While it was originally built as the private residence for the Morgans when they moved to town in 1921 after Arthur Morgan was hired as Antioch College’s president, the home has always served a larger constituency. During the Great Depression, Lucy created a food cooperative for Antioch students out of the home, according to a history document provided by Wirrig. Then, in 1934 the Morgan sold the home to Antioch, which used it as a co-op dorm, housing some 26 students. It was later used as administrative offices for Antioch before it was sold to Marianne Britton and turned into a bed & breakfast in 1986. Oldham purchased it in 2003 and reopened the B&B after a yearlong renovation.

Read the full story in the July 23 issue of the News.

2 Responses to “An open house for the Arthur Morgan House”