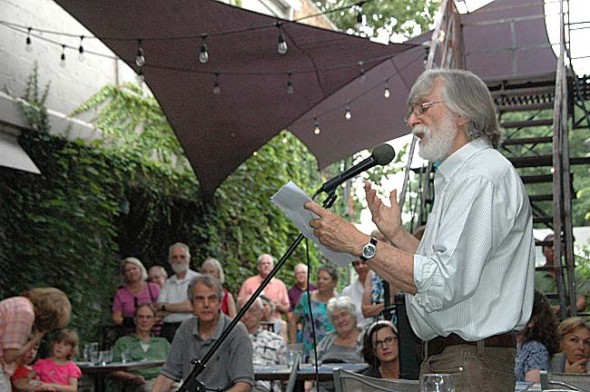 Local author Bill Felker read some of his observations of the natural world during the opening of the 25/25 landscape art exhibit at the Winds Cafe on Sunday, July 12. The art, to benefit Tecumseh Land Trust, will show through Sept. 6. (photo by Dylan Taylor-Lehman)

This past weekend, patrons of the arts and admirers of nature were able to “ooh” and “ahh” for the same reason.

On Sunday, July 12, The Winds Cafe hosted the opening reception for 25/25, an exhibition benefiting the Tecumseh Land Trust. The show features paintings of lands preserved by TLT. 25/25 refers to the 25,000 acres TLT has saved from development in its 25-year existence. The exhibition features over 40 pieces by artists from the area and as far away as Taos, N.M. and Bangor, Maine.

“The gifted artists who have captured these protected landscapes carry the message of our mission — we must act soon to protect our irreplaceable landscapes,” TLT Executive Director Krista Magaw said.

TLT assists landowners in putting conservation easements on their properties, thereby protecting the property in perpetuity from residential and commercial development.
Snacks and wine were provided by Current Cuisine and Bill Felker read from his nationally syndicated “Poor Will’s Almanack.”

Event organizer Jennifer Rosengarten said she sought landscape painters specifically. “They are perfect ambassadors for the Land Trust,” she said.

Many of the pieces were painted en plein air, or out in the open on the property the artist is depicting. Rosengarten said that painting on site allows artists to appreciate the landscape in a more present way, and this intimate, meditative relationship is in turn transmitted to the viewer.

The sense of connection to the land and the importance of preserving it was a sentiment echoed by the artists. Lee Funderburg discussed his contribution “Sycamore #11”:
“It’s in the South Glen. I live beside the South Glen and have painted it for a long time. It’s a sort of inspiration to me. I’ve always loved the sycamores. I call the tree in my painting ‘crazy tree’ because it looks like it’s dancing. That tree always appealed to me.”
Local artist Linda Pauley has been painting for 40 years. Her two paintings are of Prairie’s Edge, the TLT-protected property she owns. She was happy to participate in support of the land trust.

“Prairie’s Edge has a 17-acre marshland, two huge woods, and it’s the headwaters of Deer Creek,” she said. “We wanted to maintain it that way. We maintain that no trees are cut, no one infringes on the wetland.”

Pauley is from Indiana originally and said she appreciates Ohio’s vibrant arts community. “The work here is top-notch. There’s every style. There’s something for everyone,” she said of the exhibit. “In fact, a lot of men have been coming up to me and telling me how much they like my painting “Passing Storm — Prairie’s Edge #2.” Why that is, I don’t know. Something about the power of it?”

Soon after the doors opened at 4, the cafe was “packed like a rock concert!” said one attendee. About half of the artists were on hand for the opening reception, mingling with friends, family, and art lovers alike.

Behind it all is Rosengarten, a volunteer with TLT’s education committee who was asked to help organize the event. TLT was interested in producing a high-quality exhibit, so Rosengarten sought out top-tier landscape painters. Many of the artists came by word-of-mouth recommendation and many were personally asked to participate, such as Rosengarten’s painting professor from Wright State, Glen Cebulash. The only limitations were that the pieces had to be smaller than 5’x5’ and the medium had to be paint.
Rosengarten is particularly smitten with the South Glen and its covered bridge, though the green space around the Village is something she considers rare and impressive in its entirety. As a well-known painter, she has two pieces in the show, including one in the entryway to the cafe.

The proceeds of every painting sold will be split between TLT and the artist. “It’s super generous of the artists to contribute their works. And it’s a nice price range for buyers, between $150 and $2,000,” said Magaw.

The exhibit is hosted by The Winds Cafe because of the TLT’s history with restaurant, which has donated meals for the big fall auction in Springfield and prepares an annual local food benefit dinner, which is coming up on its 12th year.

“We felt that for our 25th anniversary it would be a lot of fun to do the show there. They do a lot of nice things for us,” said Magaw.

After an hour of spirited mingling, attendees were ushered outside to hear Bill Felker read.

“Bill Felker is the perfect component to tie it all together,” Rosengarten said. “He has an incredible reading voice. You’ll be driving down the road and you’ll hear him come on the radio and let out a sigh of relief. His writing perfectly captures the reflectiveness inspired by the landscape. He shows us how the seasons are changing and reminds us to slow down.”

Magaw, who also mentioned the calming effect of Felker’s voice, noted that he does a walking meditation with TLT in the Glen once a month. “We walk silently and try to focus on all the senses, then sit and write a little bit and reflect,” she said. “It’s just great. You really feel refreshed. It’s good to be quiet sometimes.”

In his reading, Felker referred to an Almanack series from 1993 when residents were asked to make predictions about what Yellow Springs would look like in the 21st century. He said some of their comments applied to the 25/25 exhibition.

The audience nodded, contemplating the evening’s layered significance. The reading concluded with a toast by Magaw. “To you, to the Land Trust, and to 75,000 acres in the next 25 years!”

At the end of the opening, Rosengarten mentioned how proud she was of the turnout and the artists’ contributions. “It’s great to see through new eyes landscapes that are familiar to me,” she said. She was also happy to report that many of the pieces had sold, helping TLT insure that the landscapes will always be around to paint.

The exhibit is located at The Winds Cafe on Xenia Avenue, and runs through Sept. 6. The annual TLT benefit dinner will be held at the same location on Aug. 3. More information can be found at http://www.tecumsehlandtrust.org or by calling 937-767-9490.