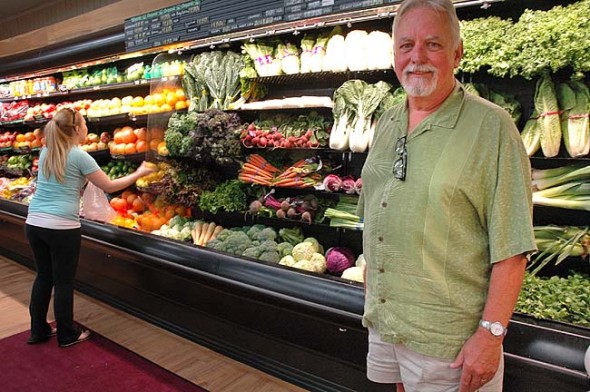 Tom Gray, owner of Tom’s Market, has been with the store 50 years, and the store will celebrate the anniversary with free hot dogs on July 17–18. Gray is shown here in the store’s produce department, which underwent extensive renovation last year. (Photo by Diane Chiddister)

Tom Gray was a high school freshman when he got his first job, as a bag boy at Luttrell’s, the grocery store on Xenia Avenue. Working at Luttrell’s was a family affair, as Gray’s two older brothers had both worked at the store, then moved on. But Gray didn’t move on; rather, he dug in.  After high school he moved up to manage produce, then the meat department, then dairy and finally groceries at the store, later called Weaver’s after Bud Weaver bought out Luttrell. And in 2001 Gray purchased the grocery, which is now Tom’s Market.

Tom’s Market will celebrate Gray’s 50 years at the store the weekend of July 17–18, with free hot dogs and soda from 11 a.m. to 2 p.m. Recently, Gray sat for an interview to reflect on his half-century in the small-town grocery business.

It’s been a good life, he said. And while you don’t get rich selling groceries, you have the satisfaction of doing good work that matters to people.

“I never made a lot of money, but I also never got laid off,” he said. “And I was able to raise four kids.”

Gray doesn’t plan to get out of the grocery business any time soon. He enjoys being the first one each morning at 5:30 a.m. to arrive at the store, where he makes coffee, puts out the doughnuts and gets the registers ready to go. Some folks will be waiting by the door when Tom’s opens at 7 a.m., and he wants to be ready. He enjoys people, and looks forward to seeing both his employees and his customers.

“The best part is coming in every morning,” he said. “Everyone is happy to see me and I’m happy to see them. We talk about last night’s ballgame or whatever’s on their minds.”

When Gray first worked at the store, there were about 15 employees, and he now has 30 full- and part-timers. Several, such as David Trollinger, Kay Trollinger, Brenda Donley and Lori Allen, have been with him for more than 20 years, and Gray is proud of that longevity.

“I try to treat employees the way I want to be treated,” he said. “I try to pay as much as I can, and give time off when I can.”

The grocery business has been especially volatile in recent years, with new chain stores such as Whole Foods and Trader Joe’s moving into the area and many longtime independent groceries, such as Lofino’s in Beavercreek, closing up shop. Gray is proud that business at Tom’s Market has remained steady, and in fact Tom’s has picked up some former Lofino’s customers who now drive from Beavercreek to shop at his store. Gray believes the new customers make the drive because they like a small store and also because they appreciate the service.

“One of the biggest reasons is the service here,” he said. “Here, the cashiers will smile and try to help them.”

Gray also does his best to respond to customers’ preferences. If someone asks for a new product, he’ll do his best to supply it; and if others buy the product as well, he’ll keep it on the shelves.

Over the years, Gray has seen many changes in the grocery business. When he was growing up in town, there were five groceries, mainly mom-and-pop businesses, including one in the current Credit Union location, a second at the site of Dunphy’s Real Estate, and a co-op store located at the current location of Antique Power — now, most groceries are chain stores. In the past most stores had busy butcher departments, with whole carcasses of meat hanging from the ceiling. Now, most grocery stores have eliminated butchers, although Tom’s Market still employs two to respond to customers’ needs. And these days most groceries sell produce in packaged quanities, while Gray believes in leaving apples or pears loose so that his customers can choose the number they want.

Salesmen for specific brands of products once visited the store regularly, and Gray enjoyed the interactions. But now, due to corporate cutbacks, there are few salesmen, so Gray finds new products at the two food fairs he attends each year. The store’s main supplier, Supervalu, has fewer distribution centers than it once did, so trucks now bring products from Ft. Wayne, Ind., rather than just down the road in Xenia.

While these corporate cutbacks have led to an industry that feels less personal, Gray sees that other changes over the years have been good ones. For instance, the quality of food has steadily improved, especially in produce. Organic produce, once expensive and of poor quality, is now of much higher quality. Tom’s was one of the first stores in the area to stock organic produce due to customers’ requests, and now, if the price of organic and nonorganic items are similar, Gray stocks only organic. Only if there’s a significant difference in price does he order nonorganic produce.

Overall, he said, “The quality of everything is better.”

Gray also has increased the number of products that are gluten-free and non-GMO, again in response to his customers’ desires and believes that before too long all products will include GMO labeling.

Twenty years ago Gray put a deli in the store, and its success reflects the growing trend of the grocery industry to provide “good food fast,” he said, due to the increased number of working couples who want something healthy and already prepared when they shop for dinner. The store has undergone two expansions, one in front to provide room for the deli and the other on the south end of the store, where what was once an alley is now office space, storage and the store’s meat department.

While he’s grateful that business has remained steady, Gray takes nothing for granted, and tries hard to not overspend. However, he feels the pressure of upgrades in other area stores, so is constantly looking for ways to improve, including the renovation last year of the produce department and the store’s new freezer units. He frequently visits his competition, just to see what’s new and popular.

“You have to know what other stores are doing and try to keep up,” he said.

Asked about the hardest part of his job, Gray paused for a minute. It hasn’t happened often, he said, but there have been times when employees have been dishonest or stolen from the store.

“Having to confront them is a hard thing,” Gray said.

But mainly, he’s loved doing what he does. And after a half century of seeing vast changes in the grocery business, he’s especially appreciative of the steady support he gets from the village. And he appreciates the level of professionalism of his staff.

“These are good people who I trust,” he said. “When I’m not here I don’t worry about it.”

But even when he doesn’t have to be there, Gray might end up at Tom’s Market.

“Sometimes I stop in just to pick something up,” he said. “It’s not unusual to find me at the store on my day off.”