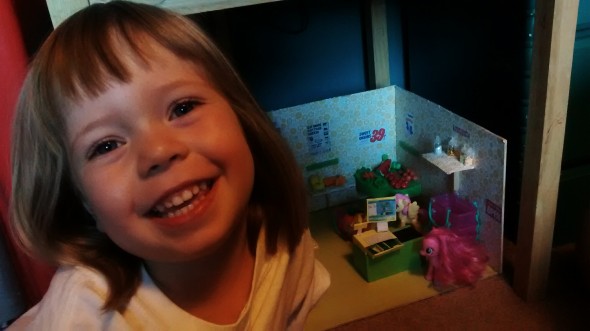 “What do you want for your birthday?” I asked my daughter. The question was asked off-hand, a way to make conversation, as my 4-year old, Lucy, desperately wanted my attention while I was cooking dinner. I thought it a safe question, as in holidays past, she has thought for a few moments, and then declared that she didn’t really know; toys, maybe?

This year, however, I was surprised to learn that she had an answer. A baffling one initially, but an answer.

A beat while I tried to wrap my head around this sentence.

“Um. Can you be more specific.”

“Oh! Okay, I gotcha,” I said, reasoning that if a grocery store constituted a paradise, I had some reevaluation to do concerning life and my place in it.

If you have read my blog in the past, you may remember that I have an obsession, possibly unhealthy, with tiny things, and especially with tiny food. I have to admit something further here: I spend way too much time each day rearranging my daughter’s dollhouse after she plays with it. She’s pretty good about getting everything back into it, but I take pleasure in arranging all the little pieces just so. Depending on how much time we spend in the house, this may happen several times a day. Look, it’s not necessarily normal behavior, I get that; especially considering I have no such regard for the regular-sized mess in my regular-sized house. 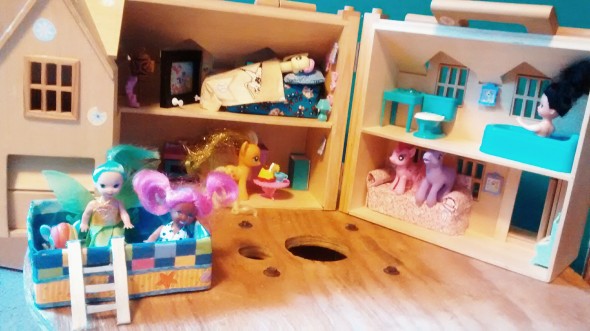 It’s that time of day when everybody is either taking a bath, eating spaghetti, swimming, lying in bed or sitting quietly on the sofa with a friend. You know that time of day, right?

So when my daughter said she wanted a doll-sized grocery store for her toys to visit, I was on board like you would not believe.

It would have been very easy to head on down to a toy store and get this particular request knocked out in about 10 minutes. It wouldn’t even have cost too terribly much; Target carries a cute line of dollhouses and accessories called “Li’l Woodzeez” (which appear to be knock-offs of of the pricey Calico Critters line), and the Li’l Woodzeez General Store set goes for about $25 (with a similar Calico Critters set at around $80). I came so close to buying it. Like, I had it in my hand, looking at the tiny little apples and bread loaves and cheese rounds. 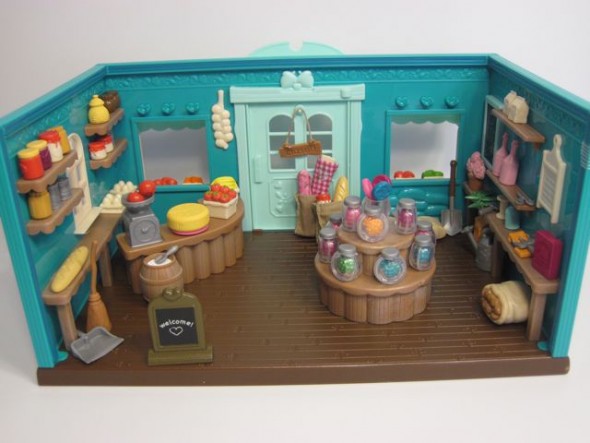 Li’l Woodzeez: could you say no to such perfection?

I stood in the toy aisle for several minutes, looking at it. Then, the fatal thought flitted across my brain: “Eh … I could just make this, right?”

I would like to go on record and say that, if you are in the market for a doll-sized grocery store, you will not save much money by building your own; maybe like $5, and that’s if you for some reason already have some of the materials. So unless you get some perverse joy out of staying up until 3 in the morning kneading food coloring into air-dry polymer clay and then making a bunch of tiny produce and baked goods, go ahead and buy the Li’l Woodzeez. 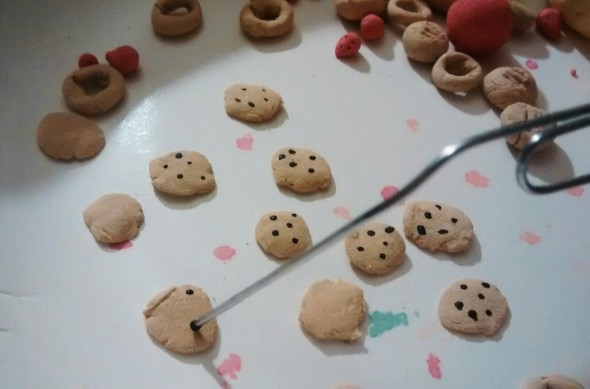 The act of a true miscreant.

But if you are, like me, perverse, let me be the first to remind you that YouTube is a wonderland of tips and tricks when it comes to all things miniature. My guiding light was a channel called “My Froggy Stuff,” which is operated by a family of four, under the helm of the matriarch, who is clearly some kind of wizard. This woman can make literally anything out of cardboard and hot glue. And while it’s clear these toys are for her children, they are, maybe almost equally, for her, because she gets such joy out of making them. She is, ladies and gentlemen, my hero.

I used her grocery store instruction video as a loose template for building my own store. (Sorry, I mistyped: I meant to say “my daughter’s store.”) We made the walls and floor from thin craft wood, hot glued together and papered over with cast off scrapbooking paper I received from my mother-in-law a few months back. At the time, I had no idea what I would do with it, but my general philosophy on free stuff is “Yes, please!” 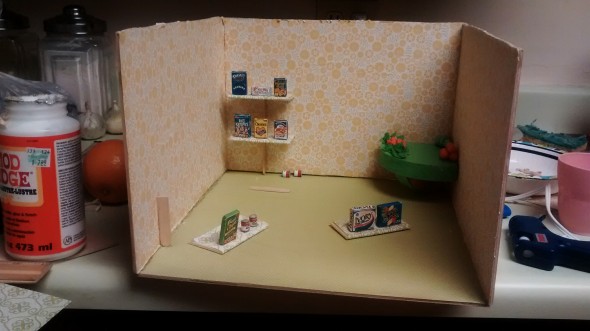 Note: I am still removing both Mod Podge and hot glue from underneath my fingernails.

As previously mentioned, much of the food was made from polymer clay and Mod Podge, but other pieces were made from package templates from a wonderful website called “Jennifer’s Printables,” which, when printed on card stock and then folded and glued appropriately, allowed me to add cereal boxes, soup cans and laundry detergent. 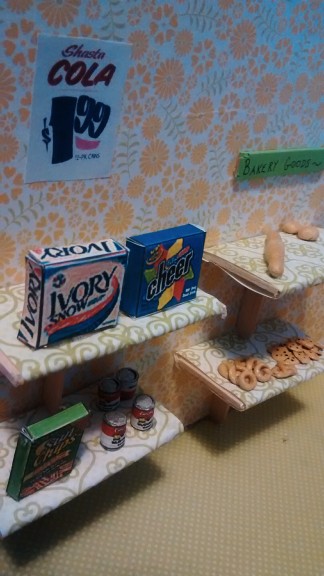 Apparently my daughter’s dolls live in a time and place when both Ivory Snow and Shasta Cola are common purchases. Also where Sun Chips come in a box?

Next was a checkout area, which was a joint effort with my husband, Anthony, who insisted (and rightly so) that any child of his deserved a checkout line with a pretend conveyor belt. He found an appropriately-sized block of wood and painted it thusly. Meanwhile, I made a cash register out of card stock, paper and Mod Podge, once again calling upon the power of “My Froggy Stuff.” Anthony cut pieces from popsicle sticks to bolster the balsa wood shelves, and, by his own design, used the leftover bits to make tiny wooden money, cementing in my mind the notion that he is the perfect man. 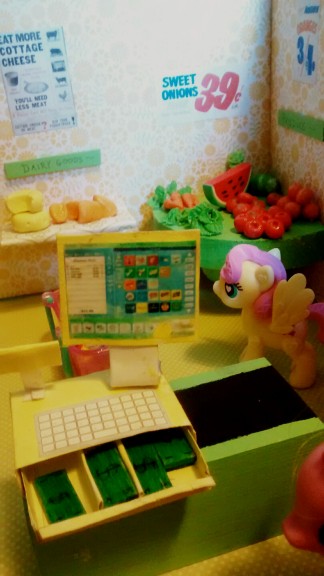 Be still, my heart.

All of this took place over a week or so leading up to my daughter’s birthday party. I applied the finishing touches around 2:30 a.m., the night before the party, while my daughter, husband, mother and younger sister all slept. 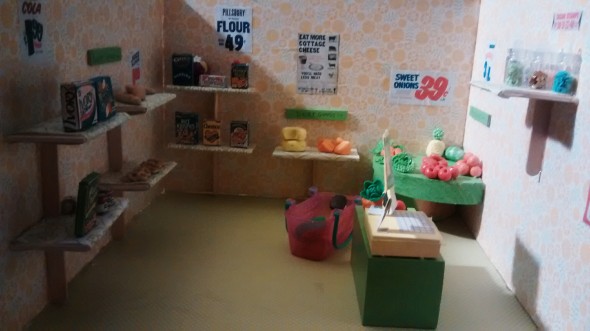 The birthday party was held at the Jacoby Road boat launch on the Little Miami; on the morning of the party, I decided that there was no way I was carting this thing and its tiny little parts all the way down there where a bunch of kids would be running around, cake-crazed and dripping river water. I would just give it to Lucy after the party.

She fell asleep on the way home at around 7 p.m., and didn’t wake up until around 9 a.m. the next day.

Lucy did eventually receive this gift, and was very effusive in her praise. I took these good words to heart, though I know that, freshly five years old, she has very little conception of the work it took to build such a plaything. Likewise, now that I’ve handed this toy over, the painstaking care I took to arrange each carrot or box of Cheerios is now irrelevant, as each piece is now Lucy’s, to do with as she pleases. Sure, I can give her advice or pointers, looking over her shoulder all the while, but in the end, it’s her decision to make. This is Lucy’s.

Anyway, I’m glad she likes it, because I also like it, and honestly, building it was sheer ecstasy for me. And I’m also glad that the two of us easily came to an understanding: Lucy and I both agreed that, the day she loses interest in this toy, ownership immediately reverts back to Mom.

One Response to “BLOG — Toy paradise”