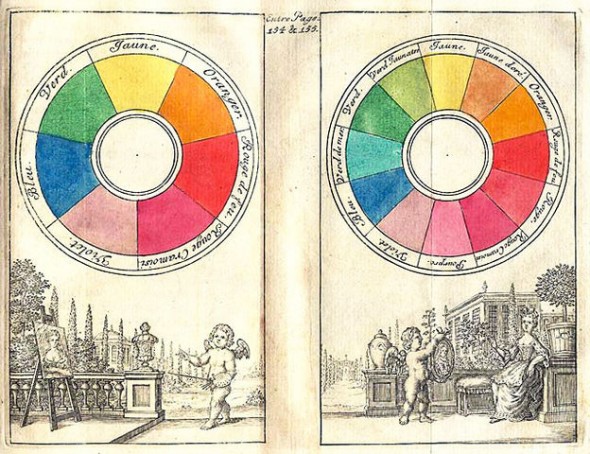 Green and yellow, so close on the color wheel. "Boutet 1708 color circles" by C. B. (probably Claude Boutet). From Wikipedia.

I confess: I had a brief romance last summer. With Vermont. Not the whole state, just one or two towns. A friend was selling a small house in southern Vermont, and I was intrigued. My husband and I are from the East, and though we’d lived in Yellow Springs, very happily, for two years at that point, we felt an eastward tug. So I went, with my husband’s blessing, to pursue the hope of new love.

The house was small, even smaller than we’d thought — a lovely but impractical outbuilding had been counted in its total square footage — and overpriced. (Why look 800 miles away for small-and-overpriced, we quipped to each other later. We have that right here!) It was quickly eliminated, though other houses were explored. After three days of looking, I was a little bit in love. I’d seen a sweet house, and it had seemed to see me. Longing looks were exchanged, though no definite plans were made. Off its back deck rose a perfect green mountain. (This is Vermont, I sighed. A green mountain for every man, woman and child.)

The night before leaving, I drove to see the house a second time. I had dinner on the patio of a neighborhood restaurant. Over cheap but intoxicating wine, I gazed again at the house’s specs. The air felt cool — green, somehow. Though no green mountains were in immediate sight, they were there. I could feel their reassuring presence, like a council of serene elders, all around. And just as my infatuation threatened to take on the deeper hue of love, I was seized with homesickness.

I drove back to my lodgings in an agitated state. Brooding behind the wheel — never a safe practice — I got hideously lost. Up and down country roads past the now-hateful green hills I drove. Why, oh why did they stand like that, shoulder to shoulder to shoulder, blocking out the last of the evening sun? Gone were the serene elders. Now I felt menaced by bouncers at every bend. No way were those dudes going to break ranks and let me in.

Yellow Springs is no utopia. (Though I’m new enough, and at times wistfully naive enough, to half-believe that it is.) What it is is a place — something that’s rare these days. I’ve lived in a few places, and many more un- or anti-places. Scotland, where I lived for a year, was definitely a place. (Or, more accurately, a place of many places.) White Plains, New York, where I lived for several, really wasn’t. Oh, there were little pockets of placehood — there always are. A struggling but spunky coffeehouse with endearingly awful pastries; a tiny Japanese housewares shop with an even tinier restaurant attached; a Kinkos (remember those?) where a surprising camaraderie sprang up among the late-night faxers and photocopiers. But White Plains as a whole? A hole where the place should be.

We didn’t move. I came home oddly frightened by the thought of moving, the way a child fears the power of a mean thought to come calamitously true. “We don’t really want to move,” I implored whichever deity’s in charge of such things, maybe Hestia/Vesta, goddess of home and hearth. “Please cancel the order.”

I still think, sometimes, of green mountains. From this distance, they are elders again: kind, patient, wise. The house stayed unbought on Realtor.com for a few months, then I stopped checking. I hope it and someone fell deeply in love.