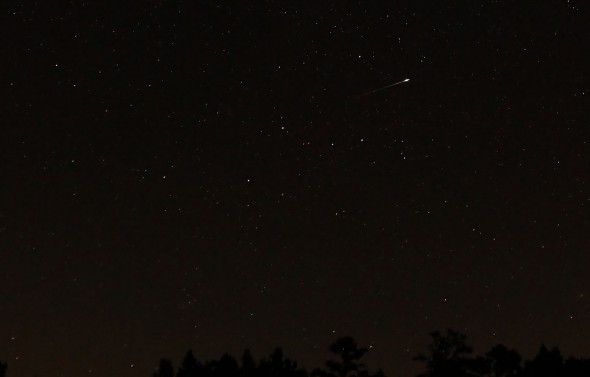 What we didn't see: High-drama skies like the above shot of Perseid in Cassiopeia, August, 2014. Photo by John Flannery.

The world looks different at 3 a.m. It’s a strange hour, one in which deaths, crimes and hauntings are said to cluster. But in the wee hours last Wednesday, the universe was practicing not its dark arts, but those of light. The Perseid meteor shower was due to make its annual appearance — a particularly fine one, astronomers predicted — and so my husband and I arose at 3 to watch the sky.

Everything was so still and the air had an autumn chill as we walked out Polecat Road. One car passed us, headed out of town. We stopped at the entrance to the old farm road, planted our feet and flung back our heads as if to guzzle the stars. After just minutes in this stance, I began to feel pleasantly disoriented, as well as neck-sore. (Next time, we’ll bring lawn chairs.) Within a quarter hour, existential befuddlement had set in. What was I looking at, and who was the “I” who was looking? A line from the movie Harold and Maude suggested itself: “The earth is my body; my head is in the stars!” Maude, naturally.

Three constellations oriented us: the Pleiades, or Seven Sisters, a smudge to the east; the haughty queen Cassiopeia just overhead (“Look for the wobbly ‘W,'” my husband instructed); and the Northern Cross, technically not a constellation, but an asterism, or star pattern, part of the Cygnus constellation. The Perseids themselves were hard to pick out, at least for novices like us. But we knew to look roughly northwest for the promised meteor activity.

I say “promised” because the astronomy sites I’d consulted had promised a good-to-spectacular show, even while disclaiming “absolute certainty” in their forecasts. The cosmic production we witnessed underscored the value of that scientific fine print. Its highlights were subtle, often comically so. “Did you see that?” my husband and I cried out, a few times each, pointing urgently to a dark gap where a moment before something had occurred. The experience began to feel a bit like Noh theater, or Beckett without the crushing despair. If you blinked, you missed the action. Yet looking so hard your eyes watered was no guarantee of seeing anything at all, and certainly not what your spouse was seeing. There was a surreal asynchronicity to the whole affair. Standing side by side, we were watching our own shows.

But was it a “show”? Walking back home — we’d finally had “our moment,” when we both simultaneously saw the same beautiful burning arc flare and fade — I wondered about this. We’re citizens of a nation that demands to be entertained. Call it the consumer ethos: everything tailored to our taste and comfort, everything packed with “peak experiences,” the valleys stripped away. And then, perhaps as a consequence of rising so early or the Maude-like expansion of consciousness I’d just undergone, I thought about our genome, the cosmos within. Its vast blank stretches, empty as 3 a.m. roads. Turns out all that blankness is somehow key to who we are. In us and everything, nature builds in lots of lulls, stasis, static places, rest. What we’d just witnessed was at least as valuable for what we didn’t see as for what we did.

Or maybe the very idea of what we didn’t see obscures, like a cloudy night, the truer view of what we did. I mean, we were peering into the universe — back through time, as my grandfather loved to tell me when I was a girl. We were two tiny dots of consciousness blinking up at a billion burning rocks wrapped in a deep, dark, multidimensional mystery. A mystery that we also are in and of. Had I really been clamoring for a “good show”?

I returned home chastened, happy for our dark house, the still-dark day and a couple hours yet of dreamless sleep.

One Response to “BLOG— Perseid report: what we didn’t see”