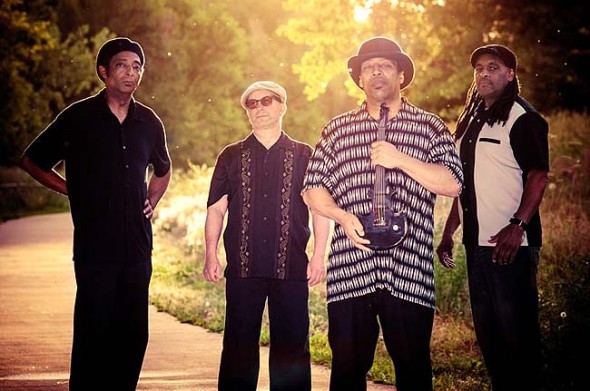 Gospel, blues turn out on the town

Following a year’s hiatus, the AACW Blues, Jazz & Gospel Fest is set to make a grand comeback next weekend, Sept. 24–26.

Its absence in 2014 — after 16 prior annual events — left a void in the village’s cultural life amid that calendar sweet spot when summer gives way to fall. Karen Patterson, current lead organizer and the daughter of festival co-founder Faith Patterson, said construction of the solar panel array on the open land adjacent to the Antioch College amphitheater — the festival’s primary performance venue -— led to the break last year.

Keeping a music festival going year after year is difficult enough, but restarting one after even just a year can be especially daunting. Waiting another year might have ended it for good, said Patterson, who feels a responsibility to her mother, the village and to the music to keep the festival alive.

A classically trained cellist, Patterson has been involved with the festival since the beginning, both as a performer and organizer. She took on more of the organizational duties in recent years as her mother’s health curtailed Faith Patterson’s hands-on leadership.

Karen has become the point person, but she insists that nothing would happen if not for all of the community members who come forward to help. “It’s an all-volunteer effort,” with multiple committees that put together and run the event. “Programming, financing, PR, stage, grounds … that’s what makes this whole thing work,” she said.

The event remains under the auspices of the locally based AACW (African American Cross-Cultural Works), which promotes diversity, community and education. “A lot of times we’ll meet right here in this living room,” Patterson said, speaking at the Patterson family home on West South College Street. The music festival has become AACW’s main vehicle for promoting and applying its mission.

Faith Patterson is well known for always insisting “Everybody counts,” and that ethic remains at the heart of the event. Diversity is celebrated throughout the festival — not only cultural, ethnic and religious diversity, but artistic as well.

The festival began in 1997 as a blues event, but over time evolved to include jazz and gospel. This year’s installment continues that inclusive legacy with the introduction of a film component. A fundraising gala Friday night will feature the showing of the historical drama “The Amazing Grace,” which tells the story of British slave trader John Newton and the origins of the beloved hymn from which the film takes its title. The movie was directed by award-winning Nigerian filmmaker Jeta Amata, who will participate in a panel-style conversation with the audience after the screening. The evening also will include a catered West African dinner and music by jazz and blues violinist Lionel Young, who will perform with his band as part of Saturday night’s concert lineup.

The weekend’s festivities will begin Thursday, Sept. 24, with a gospel-themed program presented by the Northern Kentucky Brotherhood Singers at First Presbyterian Church. The group, which also performs on Saturday night’s main stage, has participated in the festival before and was featured during the former Cityfolk Festival in Dayton. The music part of the program will be followed by a community potluck dinner at the church.

The three-day festival wraps up Saturday with a full slate of activities that includes jazz, blues and gospel workshops through the afternoon at various locations around town; the Festival Bazaar, featuring merchandise and food vendors, beginning at 3 p.m. outside the Antioch College amphitheater; and then the main stage concert starting at 6 p.m. in the amphitheater. In addition to the Northern Kentucky Brotherhood and the Lionel Young Band, the concert will feature festival mainstay The Nerak Roth Patterson Band, which is led by the longtime former villager and now includes his son, a 2011 YSHS graduate, Nerak Jr.Patterson said that an effort to encompass more of the Yellow Springs community is reflected in the scheduling of more festival events at different locations in town. The Thursday night program at the Presbyterian church and the Saturday afternoon workshops will take place at venues that are new for the festival. A 12:30 p.m. jazz workshop will be at the Yellow Springs Brewery; a 2 p.m. workshop with the jazz and blues violinist Lionel Young and his band will be at the Emporium; and a 4:30 p.m. gospel and R&B session with the Northern Kentucky Brotherhood Singers will be at Yellow Springs Arts Council Gallery.

“The whole festival is a teaching tool,” Patterson said. “I find that very powerful.”

But even more than that, when everything comes together, the festival experience can be transcendent, Patterson said. “It’s a healing thing for (festival-goers). Everything that’s bothering them goes away that weekend.”