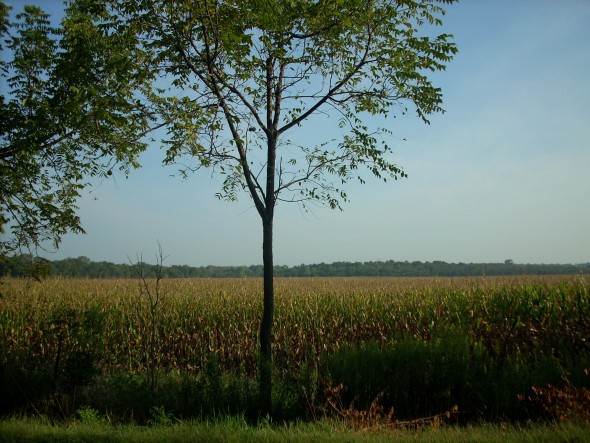 BLOG— The ends of things

It’s 90 fierce degrees outside, but summer is done. Labor Day arrives to wake us from the green dream. That’s the real reason for the no-white-slacks-or-shoes rule, I think. Our wardrobes know better than we when summer is all boxed up and ready to stow.

End-of-summer deniers have their problem, I have mine. It’s the opposite problem, really. By the Fourth of July, summer’s over. “It’s gone by so fast,” I lament. “Actually, it’s just beginning,” my husband says gently. Living in Ohio has only made things worse. The corn, the beautiful corn, unflinchingly measures summer’s rise. As the corn shoots up to full height, so does summer. “Head-high by the Fourth of July!” I wail. My husband again offers the sane corrective. “The expression is ‘knee-high,’ and look — it is.”

But if reports of summer’s demise are greatly exaggerated in July, by September, they’re just plain true. Even in this wet year, the corn is showing cautionary yellow. The leaves and stalks are drying, withering. In another month, the fields will be a ragged, skeletal army. And if they’re that way in October, they’re as good as that now. Or so says the strange and fatalistic drumbeat in my soul.

Living the ends of things in the midst of their blooming and becoming is not exactly a path to wisdom, much less to happiness. Last week I wrote about the pleasures of “living in the moment…after.” This orientation to living — extending and deepening the moment through reflection and recollection — does have its rewards. But the “moment after” also has its darker side. Most things we humans count as our strengths cast the shadows of our weaknesses. So reflection becomes…rumination. Recollection intrudes in the present moment and becomes, oddly, the presentiment of the end to which all things come.

This summer is (almost) over. The canopy above my house looks to me pretty much as it did in July. It may be that the green of summer is like a slow leak — you don’t really notice the tiny increments of loss along the way. (Biologically, that is what’s happening, as I understand it: chloroplasts are one by one shutting down, like boardwalk tee-shirt and saltwater taffy shops closing up for the season. As they cease production, the character and composition of the leaf, like the boardwalk, changes.) The ground’s a different story. “It’s fall,” I say, pointing down, and this time my husband agrees. Measured by volume-of-leaves-awaiting-raking, it really is.

Summer will come again, but not this summer. That’s the bittersweet truth. Do you know that invasive vine that turns blazingly beautiful in the fall? When I lived in New England, people would pull over and charge into the weedy woods by the road to cut down armfuls of it. A few months later, pine boughs took its place in vases and on mantles. Bittersweet was back to being all it ever really was, just another weed. Another fall — felled.

Labor Day is lazy day, but this year, I’ve made a resolution. When I walk or ride along a field of corn, I will try to see it as it is. Not as an emblem of endings. No transposing now and then. When I look at the brown fields of October, I’ll see brown fields. When I look at today’s yellowing green, I’ll see yellowing green. There will be greening green and knee-high corn again. Just not this corn-before-me corn. That’s impetus enough, I think, to both look hard and let go.