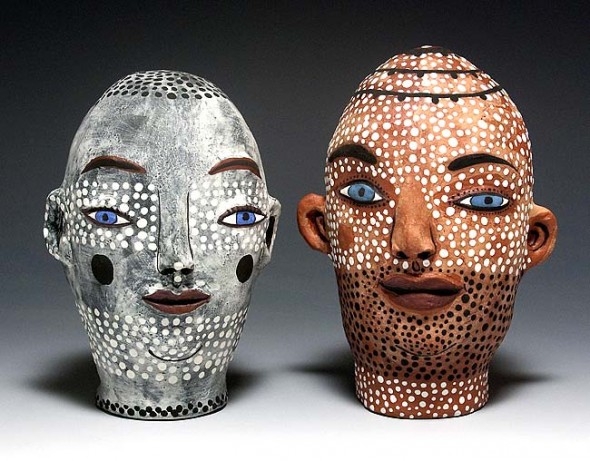 Artist Jenny Mendes will exhibit ceramic works such as her Salt and Pepper herb shakers at the 15th (and final) Yellow Springs Artist Studio Tour on Oct. 17 and 18. Eight area artists across Yellow Springs will have their studios open to the public, and each studio will host two or three artists from out of town. (Submitted Photo)

The art world sometimes carries the reputation of pretentiousness. Art appreciation is considered outside the purview of regular folks, and artists and collectors go out of their way to live up to the sophistication expected of them. But Yellow Springs potter Bruce Grimes doesn’t see art this way, and says it’s easy not to when artists are part of an event in which they truly support each other.

The Yellow Springs Artist Studio Tour and Sale is such an event.

“The Tour is great because the art is all very high quality and you can bring newcomers in and bring them exposure,” he said. “It’s a win-win. This is a show where you feel appreciated. I’m grateful to be a part of it.”

The Studio Tour gives attendees “a unique opportunity to meet artists who do what they love and to make purchases directly from the source,” according to a press release on the event. The 15th — and final — Studio Tour is Saturday, Oct. 17, and Sunday, Oct. 18, from 10 a.m. to 6 p.m. on both days. All artists will have work available for sale.

The event is hosted by eight different artists in studios scattered around the village, where attendees can see live demonstrations of their techniques. Being in an artist’s studio is an intimate setting, Bellbrook-based printmaker Andrea Starkey said, because it creates a sense of the work and the heart an artist puts into the craft. In this tour, for instance, there are massive kilns and potter’s wheels, and hand-carved woodblocks used to make incredibly intricate Moku Hanga prints, a traditional Japanese printmaking method.

This year’s Studio Tour features area artists and artists from Maine, Pennsylvania and locations all around Ohio. “Many of the artists have large national awards and have exhibited in galleries all over the country,” said tour curator and organizer Lisa Goldberg said.

Starkey maintains that Yellow Springs is the ideal place to have the Studio Tour because the area is especially appreciative of the arts. Patrons “walk away saying they are so grateful to have something you made,” she said, and they are humbled that they can possess a tangible chunk of the spirit of creativity. “It’s really rewarding,” Starkey said.

The self-guided tour is free and open to all. Studios typically offer food or drinks for attendees. Grimes said his studio is renowned for its baked goods because his daughter is such an incredible cook. “She makes me look good,” he said.

The friendly atmosphere yet high quality of the Studio Tour is something Goldberg has deliberately fostered because she understands the difficulties artists face when exhibiting at festivals or shows. It’s a lot of work lugging around thousands of pieces of work, she said, to say nothing of the costs of travel and the hit-or-miss promotion. (Grimes said that one year he did well over 20 shows, and that a tornado touched down at one of them.)

Goldberg has seen to creating the ideal tour personally. She organizes the Studio Tour herself, from advertising to courting artists to finding places for them to stay. Each year’s tour takes 6–9 months of fulltime planning, she said.

The work Goldberg puts in has paid off in the Studio Tour’s reputation. Only 25 percent of the attendees are from Miami Valley. There are “people from at least five states that come every year, and there’s someone from Alaska who plans their vacation around the art fair,” Goldberg said, and many more people have made plans to come because it’s the last tour.

Goldberg’s dedication works out for the artists too. “Four or five people have gotten gallery shows because gallery owners have come through and seen artists they like,” Goldberg said, and Grimes said that galleries have bought him out. He’s had people come by his studio a week in advance because they knew it was the last tour — they wanted to get a preview, he said.

The studios on the tour host two or three out-of-town artists for the weekend. In many cases the hosts and guests have never met, but the opportunity to make friends and see new techniques is something the artists enjoy as much as the patrons. Grimes told how four artists — one of whom he’d never met before — helped him glaze his pottery when he was severely ill a few years ago. “They showed up,” he said, “and told me to tell them what to do.” They finished a number of pieces for him before the show, and kept him company when he was pretty much confined to a chair. “[The tour] is rooted in something good,” he said.

However, the time required to throw such a lavish affair has worn Goldberg out. In addition to the months of planning and publicity and creating new pieces, she throws a large dinner party for the artists the night before the Tour opens. She also has to prepare her own studio for the visits, which is time consuming but has its practical benefits.

“My husband appreciates it because I have to clean my studio at least once a year,” she said.
But retiring the tour by no means reflects a lessening interest in art. In fact, it only means more time to pursue it, in doing her own work and in promoting the work of other artists. After all, Goldberg, Grimes and Starkey agreed, art is what they do. Goldberg says she is “miserable” when she can’t pursue art with the passion it demands. Anybody on the Studio Tour will identify as an artist in their field first. Grimes always answers that he is a potter before anything else; Starkey says she is a printmaker.

The Studio Tour is a way to show — and be appreciated for — the craft that plays an enormous role in one’s identity.

“I feel like I was meant to be an artist,” Goldberg said.