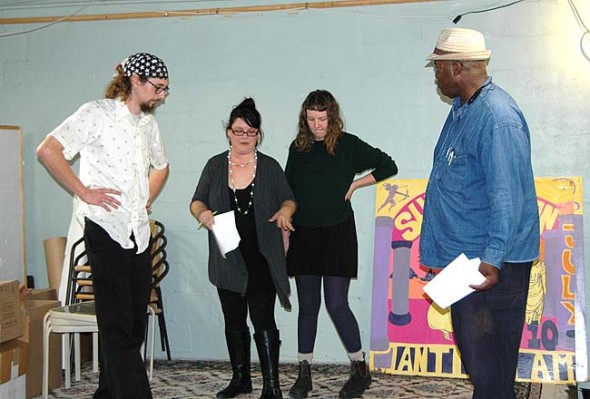 Miriam Eckenrode Saari (second from the left) directs cast members (from left) Coltin Pitstick, Anna Carlson and Bomani Moyenda in rehearsal for the allegorical play “Catch the Next Bus,” to be presented as part of the annual 10-Minute Plays Festival, which opens this weekend, Oct. 16–17, and continues next weekend, Oct. 23–24, at First Presbyterian Church. “Catch the Next Bus” will be featured during the festival’s second weekend. (photo by Carol Simmons)

“If you’ve been in town for over a year, then you’ll know someone” participating in this year’s Ten-Minute Play Festival, says Ali Thomas, a co-producer with Miriam Eckenrode Saari of the latest local short-play showcase.

The annual production is returning this month for an expanded two-weekend run Oct. 16–17 and 23–24. The Yellow Springs Theater Company will present the festival for the second year, with performances beginning at 8 p.m. at First Presbyterian Church.

The showcase embodies the concept of community theater on an essential level. Each year’s featured plays are written, directed and performed by residents of Yellow Springs and the surrounding communities. Some participants are seasoned theater professionals, while others may be walking the boards for the first time, Thomas said, adding that the festival, with its multiple short plays, also offers the chance to explore new theatrical roles — an actor may try his or her hand at directing, or venture into scriptwriting for the first time.

Ten plays — the work of 11 playwrights — will be featured this year, according to Eckenrode Saari. “We have some playwrights who are returning and we have some first-timers,” Thomas said.
The participating writers are Chuck Dunn, Harold Wright, Kayla Graham, Shannon Anderson, Lee Huntington, Jeremy Holtgrave, Amy Magnus, Keith GunderKline, Jenna Gomes, Colton Pitstick and Thomas.

The co-producers said they are particularly pleased at the range of ages — from early 20s to late 70s — among the playwrights, which has led to a more diverse expression of experience and world view. “It’s really nice to have writers who are all different ages, because people tend to write from their perspective,” Thomas said.

With so many plays, the festival also offers the chance for community members to enter the theater world as first-time actors or return to it as adults following early experiences in school or children’s theater. “People step up because it takes so many people,” Thomas said. “We tend to pull a lot of actors from Yellow Springs who this may be the only [theater] they do the whole year.”

There’s a lot of overlap, Thomas noted. The writer of one play will perform in another, or direct, or both.

Yellow Springs High School graduate Colton Pitstick, who is in the cast of an allegorical vignette titled “Catch the Next Bus,” also wrote and will perform the one-person piece “DJ Clean Gene,” based on his observations of the local personality during Pitstick’s shifts working at the Trail Tavern. “I’m excited,” Pitstick said of his one-man work. “There’s going to be some improv in it.”

“Many of the plays are about the village, about people in the village — some more thinly veiled than others,” Eckenrode Saari said.

The performances are for the most part simple, without much set or a lot of props and lighting. “We set it up, and let it roll,” Eckenrode Saari said. “It really is a focus on the playwright and getting their works produced.”

She said that this year’s showcase was expanded to two weekends in order to feature more plays. Not every play will be performed each night. The schedule wasn’t finalized at press time, but will be posted on the Yellow Springs Theater Company’s Facebook page before opening night, Eckenrode Saari said. Tickets are $10 at the door.