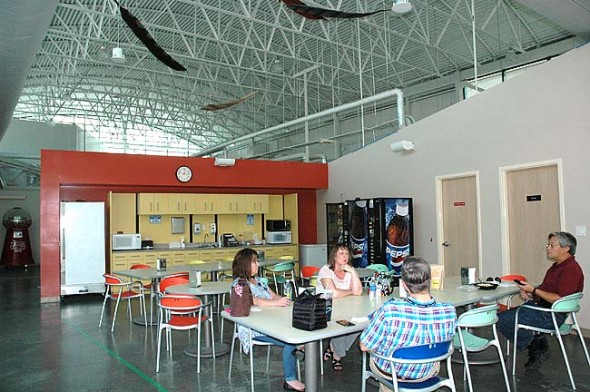 A handful of local businesses moved or plan to move into the mixed-use office and industrial building at 888 Dayton St. this year. The property’s owners, Yellow Springs, LLC, work with tenants to build office and production spaces to their specifications. (Photo by Lauren Heaton)

Last Thursday, Sept. 17, a steady stream of visitors came through a new entrance recently installed at 888 Dayton St., the former Creative Memories building. They came to attend an open house event for the Community Physicians of Yellow Springs, which will soon move to the newly constructed medical office there. The clinic is the sixth local business in the past year to sign or prepare to lease space in the once partial brownfield, which is looking greener these days.

“It’s taken maybe a year to get the project going,” leasing agent Matt Arnovitz of realty firm CBRE said in a recent interview. “But there’s been a lot of activity and openings happening recently, and as an office, medical, industrial, mixed-use space, its eclectic uses are a good fit for Yellow Springs.”
When Creative Memories moved the last of its production operations to St. Cloud in 2012, the former printing facility was leasing about 20 percent of its total 94,000 square feet to e-Health Data Solutions and later to Antioch University, while the industrial warehouse and production space remained vacant. But since a group of California investors called Yellow Springs, LLC, purchased the property in late 2013 and rezoned it as a planned unit development to allow for facility modifications, the space has slowly but steadily been filling.

In 2014 Brick Forge, a minifigure toy manufacturer, moved from a storefront location called Blokhedz on Dayton Street to an office/production space about 50 percent larger at 888 Dayton St. That year, Donald Gronbeck opened a family medical practice in a remodeled space next door, and Community Physicians of Yellow Springs announced they would relocate in a larger space down the hall. Then Yellow Springs Brewery began to lease some of the high-bay warehouse space for equipment storage. And this year, the owners finished a large yoga and massage space for a group of health and fitness therapists, and Laurelai Enterprises, a Yellow Springs online media sales company, recently signed a lease with the owners for a corner of the low-bay warehouse space.

At each step, with the help of local architect Ted Donnell of Axis Architecture, the owners have invested to remodel the space to fit their tenants’ needs. And several noted the group’s commitment to and care for their well-being and success.

“The current developer was fantastic in acommodating what we needed to have happen there,” according to Jeff Brock, president of Greene Medical Foundation, which helps advance Greene Memorial Hospital’s care facilities, including Community Physicians.

In late 2014 Antioch University vacated the office space they had occupied for three years to move to the Antioch Midwest campus just across the street. That means that currently the entire Dayton Street facility is still just about one-third full.

“It was a little blow when the University vacated and moved back to their building,” Arnovitz said. “Now we’re working to backfill the office side — we’re coming into that in the fall.”

The group is optimistic about marketing the office’s open floor plan as an incubator space for start-up businesses that are interested in a collaborative setting that’s ideal for mobile offices.

“When [Creative Memories] built this space they were ahead of their time,” Arnovitz said. “This contemporary, open space with no hard offices is what all the Fortune 500s want now.”

Arnovitz is also confident that the availability of both high- and low-bay space with shipping docks and heavy and multiple-phase power options will fulfill the needs of other businesses and still be a good fit for the village.
“The architecture is pretty eclectic and Yellow Springs-like.”

Existing businesses expand
Laurelai opened as Laurelai Books, a home-based internet sales business owned by John McDonald and his wife Laura (Huntington), who grew up in Yellow Springs. John, a librarian, and Laura, an educational publisher, took their online book and media sales company live in 2009 and last year outgrew the residential space dedicated to the business. With two side businesses in the works, one in music-related publishing and an online information-based business, the couple wanted more desk and storage space for work that would continue to allow them to center their lifestyle around the experiential home-schooling of their three children in Yellow Springs.

The low-bay warehouse space that Yellow Springs, LLC was willing to enclose for them at 888 Dayton St. adjacent to the shipping dock met their needs, John said. Laurelai plans to occupy the space on Oct. 1.

According to John, though the couple didn’t look anywhere else, they don’t know what they would have done had the local space not been available. MillWorks would have met most of their needs, but it was full when the McDonalds were ready to expand, John said. In addition, Matt Schaub, a Yellow Springs, LLC, owner, was attentive and accommodating.

“He made time to meet with me and is extremely responsive to new businesses and committed to getting the right kinds of businesses that fit with Yellow Springs,” John said. “He seemed very conscious of who was coming in and had a lot of questions about what we were wanting to do.”

Arnovitz couldn’t give details about the yoga and massage group the owners are working with to occupy the other new section of the low-bay warehouse. But the 2,400-square-foot space has already been reconfigured with one large open space and new skylights for yoga or movement classes and two smaller rooms with an anteroom for massage or private treatment sessions.

Physicians move in
When Greene Memorial Hospital decided to expand its array of services in Yellow Springs, the hospital knew it needed more space than the existing Community Physicians clinic on Brookside Drive could offer. As a community clinic of Greene Memorial and part of the larger Kettering Health Network, the clinic recently hired a second nurse practitioner, Rosemarie Morosco, and a third physician, Bobbi Barth, into the practice. According to Greene Medical Foundation President Jeff Brock, the clinic would also like the option of adding more services from specialists in the cardiac, orthopedic and OB/GYN fields.

So last year the clinic began working with Yellow Springs, LLC, to design a space at 888 Dayton St. that would take them from their current 3,500 square feet and five exam rooms to 6,000 square feet and 12 exam rooms. The facility owners began interior construction in late spring to create a second common entrance that leads directly to the clinic, with a reception and waiting area, offices and patient suites. The installation included drop ceilings, drywall, flooring and new HVAC and electric systems designed specifically for a medical office. Working from a base lease negotiated for tenant improvements and an amortized loan, the clinic signed a multi-year commitment and expects to move in sometime this fall.

According to Brock, the owners were very accommodating.

In Arnovitz’s view, what Schaub and his group did to reconfigure the space is very typical of how an existing space gets repurposed.

“That’s how it works — unless it’s owner-occupied, there are very few people who come in able to use the space as is,” he said. “You’re almost always going to have to do some things to meet tenants’ needs.”

Other businesses continue
As the first business to move into 888 Dayton St. after Yellow Springs, LLC, purchased it, Brick Forge also had a welcoming experience. According to business owners Kyle and Rachel Peterson, they had a local business, needed to expand, wanted to stay in Yellow Springs and found the facility’s owners willing to work with them to meet their needs.

The move gave the growing minifigure toy manufacturer, whose production operation is based in China, more room for design, marketing and sales, and access to shipping bays for both ingoing and outgoing packages — advantages the downtown space couldn’t have accommodated, Kyle Peterson said.

The Petersons looked at other spaces in Fairborn and Springfield, where space was slightly cheaper. But they wanted to stay in Yellow Springs, which is both quieter and where they and their children live. And they were able to negotiate a rent they could afford.

“The owner has been extremely accommodating — he wants us to succeed,” Peterson said. “We love this space — it’s been wonderful for us.”

Since the move, Brick Forge’s productivity has increased, Peterson said.