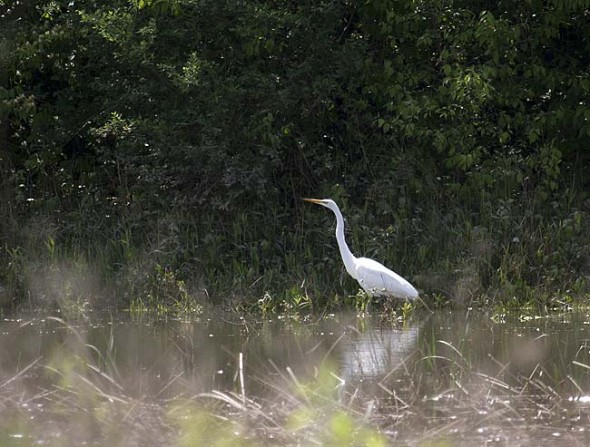 A great egret pauses to display its elegant white plummage in the wetland at Glass Farm. The egret is one of numerous birds and other species of wildlife that have been spotted in the area. Last week, Village Council gave a green light on submitting a Clean Ohio grant application to preserve the area and make it accessible for low-impact recreation. Tecumseh Land Trust will take the lead on the grant. (Submitted Photo by Scott Stolsenberg)

At a special session on Sept. 21, Village Council gave Manager Patti Bates a green light to submit a grant application to Clean Ohio for the preservation and low-impact recreational use of Glass Farm wetland, a seven to eight acre parcel of land on the Glass Farm property. Council members voted 4–0 (President Karen Wintrow was not present) in favor of moving ahead on the grant, signaling their belief that the area does not pose a threat to the health of humans and wildlife.

Earlier this week, Tecumseh Land Trust’s board came to a similar decision, passing a resolution to submit the grant. TLT will take the lead on the grant, but will work with the Village to develop an easement for the property. The Village will also provide support for restoration and rehabilitation of the area.

If funded, the project would develop low-impact trails, bird blinds and interpretive signage to engage the public with the site’s natural features. The grant application will be submitted at the end of October, and TLT expects a decision by December, said Magaw.

“I think this has a good chance of getting funded,” she said.

Environmental concerns raised
The decision to move forward with the grant came after citizen Marcia Wallgren raised strong concerns at Council’s Sept. 8 meeting about contamination of the wetland via the unnamed creek that feeds it, which eventually becomes Yellow Springs Creek. In response to those concerns, Council at that earlier meeting agreed to have the Village review existing monitoring data and do its own sampling of sediment and water from the area.

Concerns over contamination stem from the still-unresolved cleanup of chemicals released by Vernay’s past operations into the ground on and around its Dayton Street facility. Though the Vernay facility is a U.S. EPA cleanup site and several “corrective actions” have been taken, a final plan for cleanup has not yet been developed and implemented, according to Wallgren, a local resident who is part of a citizen group with court-appointed oversight of the Vernay remediation.

Groundwater contaminated by past chemical releases can enter the creek via storm sewer outfalls on Dayton Street. Vernay’s environmental consultant, TRC, has been measuring contaminant levels at that outfall since 1999. Their data is reported to the EPA. Reports are also sent to the Village Manager and filed at the Yellow Springs Public Library.

According to Bates, who recently reviewed the history of TRC’s monitoring with a representative from that firm, the Ohio EPA had formerly required monitoring at several Glass Farm locations. But minimal contaminant levels in those locations prompted the Ohio EPA to reduce its monitoring requirement to just the outfall on Dayton Street, she explained.

Tom Dietrich, a local environmental engineer and member of the Yellow Springs Environmental Commission, reviewed the outfall data and reported back to Council on Sept. 21.

“None of the levels are above the criteria” the EPA has established for surface water, Dietrich told Council members. In a phone interview this week, Dietrich clarified that all the sample results were “well below” the Ohio EPA water quality criteria, which applies to surface water in the Ohio river drainage basin and is designed to protect the health of aquatic wildlife.

“Surface water has a different standard than drinking water,” Dietrich told Council. The data do indicate that the creek’s waters exceed the more stringent drinking water standard, he said.

“People should not drink this water,” he emphasized.

But which standards apply?
Asked in a phone interview this week about the discrepancy between the two standards for water quality, Wallgren referred to a U.S. EPA mailing to residents from 2006 that cited wading in the creek as one “route of exposure” to contaminants and to the 2004 report submitted to the EPA that positively identified contamination in the creek. Both these information sources are available to the public on the EPA’s Vernay webpage.

“Based on the U.S. EPA warning of people staying out of the creek and Vernay’s own expert study and knowledge of their contamination of the creek, I sincerely hope this project will be set aside until the company cleans up the contamination,” Wallgren wrote in a Sept. 18 email to Council members.

Dietrich clarified by phone that he believed the standards applicable to the cleanup of groundwater at the Vernay site are the more exacting drinking water standards. However, different standards apply to the safety of surface water, and those standards are relevant in the case of the wetland, he said.

Results of the Village’s own testing of sediment and water samples from the creek and wetland were not available when Council took up the issue again at their Sept. 21 meeting. (Results are now in and being interpreted by Water/Wastewater Superintendent Brad Ault and by Dietrich, said Bates in an email this week.) However, based on the review of the monitoring data by Environmental Committee members Dietrich and Vickie Hennessy and Bates’ conversation with a TRC representative, Council felt confident enough in the site’s environmental status to move forward.

“I don’t believe this is a hazard based on the information we have before us,” said Bates.

Council member and Environmental Commission liaison Marianne MacQueen suggested that the Village may want to continue to periodically sample the water and sediment. Bates agreed to revisit the issue.

Asked about environmental concerns this week, TLT’s Magaw expressed confidence in the Environmental Commission’s due diligence.

Coda
Magaw voiced the hope that wetland restoration in Ohio could take place through small but locally significant projects like Glass Farm.

“We’ve lost 90 percent of wetlands in Ohio,” she said. Yet wetlands play a vital role in processing water and providing habitats for diverse wildlife.

The discussion surrounding the Clean Ohio grant application also brought to the fore questions about what remains to be done in cleaning up the Vernay site.

“I’ve put the status of the cleanup on the Environmental Commission’s agenda,” said Dietrich this week.

The News will provide an update on the Vernay cleanup in a future issue.

In other Village Council business:
• Council voted down an amendment to the bylaws of the Regional Planning and Coordinating Commission (RPCC) of Greene County that would change the fee structure for smaller municipalities and roughly double the Village’s annual membership fee, from $442 to $871. The “no” vote does not mean that Council will not ultimately re-up membership in RPCC, which the Village has used for planning needs in the past.

• The Economic Sustainability Committee is reconvening after a hiatus, and Council is seeking applications from citizens with skills and experience in areas such as business and finance, economic development, re-localization and community involvement. Seven citizens are sought for volunteer service on the commission. Those interested in applying don’t have to be economic experts, said Clerk of Council Judy Kintner, just “smart people with the best interests of the village in mind.”
Applicants may send a letter of interest to Kintner at clerk@yso.org or call her at 767-9126 for details.

• Council agreed to move the ACE Task Force discussion to Thursday, Oct. 29. It is no longer scheduled for Thursday, Oct. 22. The new date will be confirmed nearer the time.